Because things have been crazy for the past couple of weeks, but there are some items that still demand their due attention.

We've talked multiple times before about how the right (or at least the most sane) position during fan disputes is typically somewhere in between the two popular extremes. I'm not sure that's ever been more true than it is right now with the fan base's current stance on the 2013 football season.

For starters, it's ridiculous to act like the last three games haven't felt more like a chore than an exciting viewing experience. The lack of an engaging opponent, the offense's inability to fire on all cylinders and the overwhelming feeling that a trip to Orlando in late December has become an inevitability have all made this a less than desirable stretch.

On the flip side, the attendance for U of L's first Saturday night home game in five years (which also happened to involve the best opponent left on the Cardinals' schedule) failed to impress. I guess I can understand the argument that people with kids needed to leave early, but that does nothing to explain why the student section was never more than 1/2 full.

My question is: What else are you guys doing? I see thousands of U of L students on Twitter with "CardNation" or "L1C4" hashtagged in their profile, but we can't get more than 100 or so to show up for a Saturday night game? You can't spend all summer talking about the Sugar Bowl win and how the Cards are going to go undefeated and then not show up because the team lost one game and is playing an opponent you don't find stimulating enough. That's not how this works.

It's Ok to be a little bit unhappy with the state of things right now, it's not Ok to be unsupportive. This is your program and this is your team. Also, they've lost three effing games in the past two years. That's pretty good.

Interesting decision by the U of L folks to go back to Pitbull's "Hotel Room Service" for the starting lineup song and away from the old Chicago Bulls' theme that helped us to back-to-back Final Fours and a national title.

As a friend said when he heard it for the first time before the Charleston game, "this is so Sosa." While that by itself isn't exactly a bad thing, it does remind you of a time that didn't include a great deal of postseason success.

Still, there's no question that "Hotel" provides a sensational clapping experience for the home fans, and is the superior intro song choice when on-court results are taken off the table. Since a national championship has already been achieved, I'm all for its return.

Plus, this probably brings us one step closer to a Pitbull halftime performance and a "Pitbull's Louisville" banner on the side of the Mercer Tower.

We never got to talk extensively about the Connecticut game (not that this is great crying shame), but what was up with the "UCONN" logo that stretched from one 30-yard-line to the other? It made the entire game feel like it was being played at midfield.

A friend of mine put it the best: It was like the ground's crew walked out that morning and was like: "We're 0-8, do we really need to do the Husky logo? Let's just take the endzone stencil and do it at midfield. No one's going to give a sh-t."

The Rent also got Chron'd one last time that night. 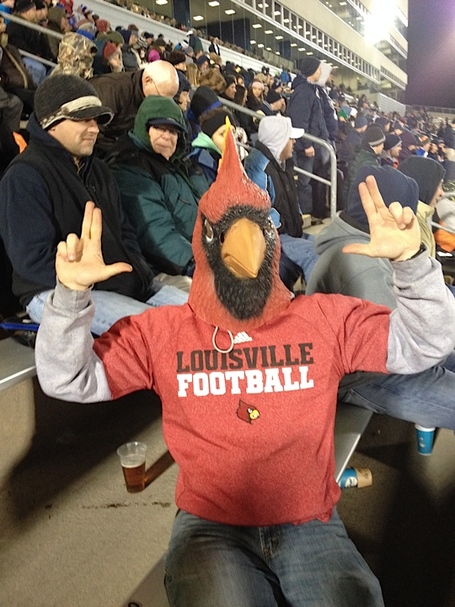 See you on the other side, Huskies. Not really. Enjoy an endless purgatory.

I came into this season fully prepared to have to defend Chris Jones for the first two months of the season. Not because I thought he'd be bad or anything, I just thought that his style would be such a contrast to Peyton Siva's that it would leave the fan base unfairly blaming him for anything and everything that went wrong.

It's fair to say that Jones has, to this point, exceeded even the loftiest of preseason expectations.

A "score-first" junior college point guard walking into Rick Pitino's system doesn't exactly seem like a match made in heaven, but Jones has flourished in his first four games as a Division-I player. He enters this weekend's Hall of Fame Tip-Off championship round averaging 13.0 points and boasting an absurd 17:2 assist-to-turnover ratio.

A lot of people worried before the year about Jones (who put up huge scoring numbers in JuCo) having to share the backcourt with another guard known for his ability to put the ball in a basket. Instead, I think it's the presence of Russ Smith that deserves the most credit for Jones' seamless transition into D-I ball.

When Jones looks at the guy next to him, he sees a first team preseason All-American who's been to two Final Fours and been the top scorer on a national championship team. Basically, he knows that the way Russ plays is not only good for Russ, but good for the entire team. That trust is huge, because playing with a guy like Russ Smith can't be the easiest thing in the world, especially if you're accustomed to shouldering the lion's share of your team's scoring. But it's that trust which has given Jones the confidence to play with the patience and poise necessary to flourish as a point guard at this level.

I don't think we've had a player in recent memory whose shooting has affected the fan's perception of his game like Wayne Blackshear.

Despite missing his first 11 field goal attempts, I thought Wayne played really well against Charleston. Granted, putting the ball in the basket is a big part of the game, but he was aggressive and made things happen on an afternoon when Louisville's other playmakers seemed a step slow.

While the fans gushed over Wayne's career-high 20 points against Cornell, I know the coaching staff was less pleased with his play. He didn't pass, defend or rebound the way they wanted him to, but he did shoot the ball well, and that's what got him into the first or second paragraph of all the recap stories.

I'm still driving the Wayne bandwagon for this season. And I'm doing it while wearing guyliner.

The Houston player ejection last Saturday was one of the more bizarre things I've ever seen. It was like the kid was mad that we scored a touchdown and just decided to haul off and punch someone not once, but twice in the facemask (never a good decision). Apparently the fact that this was still an extremely competitive game mattered not to the young man.

Between that, the running at Teddy when he was taking a knee in the closing minute and the way the visiting fans bugged me (don't ask me to explain), I'm way more excited that we signed a two-year deal with these guys than I was initially.

Yes, I had terrific seats for the Cornell game, and yes, I showcased just how enthusiastic I can be about the basketball stylings of David Levitch. I'm not going to apologize for either of those things.

Easily the best moment of the game came late in the first half when Pitino angrily yanked Russ for being out of position on defense and then screamed at him: "You're gonna be the first All-American to sit the bench!" Russ nodded.

You got the sense after Tuesday night's game that the players are just as tired of the lack of early season competition as the fans are becoming. It's why I think this weekend - even though North Carolina is depleted and Fairfield is...not good - will be great for the Cards. A change of scenery and a nationally televised game are both necessary stimulants for a squad with some sneaky tough home games (Southern Miss and Missouri State are both undefeated) on the horizon.

We are now two weeks away from our next conference football game being an ACC tilt against Miami. No more having to root for league opponents with the same zeal we root for the Cards, no more being on the constant defense when the topic of scheduling is brought up, no more searching for reasons to be excited, and hopefully no more arguments over attendance and support.

There's still plenty to take care of, accomplish and honor this season, but it's extremely comforting to know what's on the horizon.

A problem with the lighting inside the Yum Center before the Cornell game last Friday delayed the opening tip by about 15 minutes and also made for the best moment of the season so far.

Also awesome? Seeing the combination of shock and confusion on Coach P's face as he watched the "What Does the Fox Say?" video on the big screen. Actually, I'm changing my answer, think that was the highlight of the season so far.