So the last couple of days have pretty much been equally draining and demoralizing to follow, for a bevy of reasons. There are a number of issues at hand, but paramount among them is the fact that the Louisville/Kentucky rivalry is on the verge of becoming a bit too much...if it hasn't already done so. The way that everything has to be an absolute now, the way both sides have to relate any piece of news to the other, the poorly-written tweets, emails and posts...it just doesn't stop, and as hard as you might try, that makes it impossible to ignore and impossible to "just brush off."

Anyway, there's a lot more to be said and a lot more that I need to write about, but at the moment I don't really have the stomach for it. Maybe it's seasonal depression, maybe it's the fact that our basketball and football teams have lost once since February and I'd much rather focus on that.

The one thing I do want to say before moving on to things that I think everyone would rather discuss, is that Card Chronicle is never going to become a place that baits the other side for attention or for profit. If that's what it takes to "be good" at running a website, then I'm fine with being average. Sure we're going to keep doing it for fun from time-to-time because, I mean come on, it's one of the biggest rivalries in the country, but it's never going to be something that becomes a daily focus.

I understand that Cardinal fans and athletics employees alike are frustrated that there isn't a local outlet dedicated to "taking down" our arch-rivals when they're in a situation where they're feeling perpetually attacked, but I don't have the time or the desire to assume that role...unless someone's going to give me like a billion dollars to do it.

Like I said, there's a lot more that needs to be written on this, but I'm not ready to walk off that ledge tonight.

Louisville baseball players have received their College World Series rings, and they are quite bad ass. 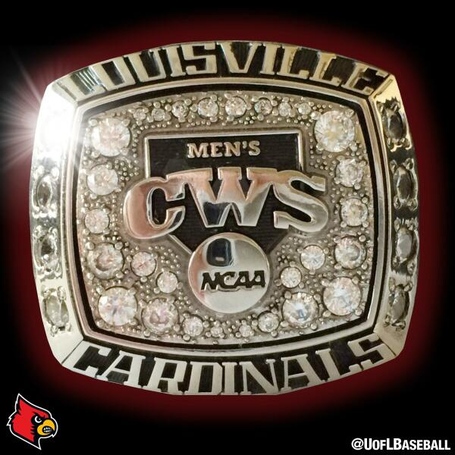 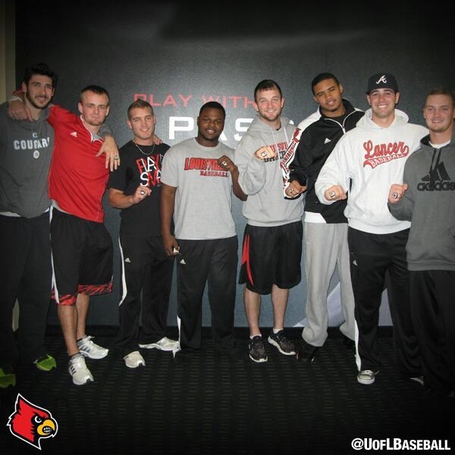 A quick reminder that the U of L men's soccer team begins its NCAA Tournament run Thursday night at 7 against Denver inside Cardinal Park. A date with No. 11 seed Michigan State in the round of 32 is on the line.

The Courier-Journal's Steve Jones sat down for a lengthy Q&A with former U of L commit, and now current U of L signee, Quentin Snider.

What was last week like for you and making a change to Louisville?

It was a big change. Illinois did a real great job of recruiting me. Their head coach and the staff, it was good, but my heart was still at Louisville. I was born here, and I always wanted to be a Louisville Cardinal. Ever since I was younger and a little kid, I wanted to go to Louisville. That's why I went back.

When did you start changing your mind, reconsider things, and begin thinking Illinois wasn't right for you?

Were you watching the style of play as well when you were thinking you wanted to come back?

Yeah, the style of play, how they set pick-and-rolls and how they get up and down the court and pressing and stuff.

So you're saying "Matz" is pronounced like "Motts," eh? 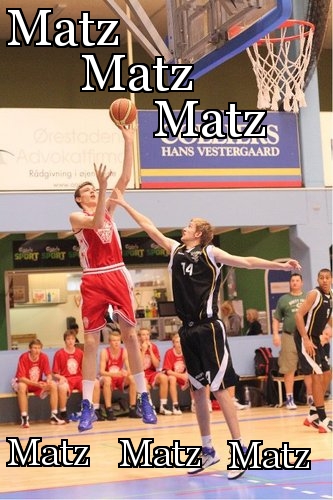 This is the best signing ever.

Louisville remains in the top 10 of the UPS Team Performance Index, which also remains the best set of college football rankings in all the land.

Moody's Investors Service has lowered its confidence in the ability of arena officials to repay the construction debt on the KFC Yum Center, citing the dependence on a special taxing district, high operating expenses and a lease with U of L that limits the building's profit potential. Marcus Green has more.

Fresh off its preseason NIT win over Oklahoma, the Louisville women's team jumped a spot from No. 5 to No. 4 in the latest AP Top 25. The Cards sit behind only unanimous No. 1 UConn, Duke and Tennessee.

Chicken Knowles is 1/2 of the fifth-best recruiting package deal in the last 12 years.

Commitment Date: House and Knowles committed together on Sept. 11, 2011.

Package Deal Confirmation: The Houston natives had a press conference together announcing their commitment to UH. According to The Arena Pulse, when asked if they always planned on going to school together, House responded, "yes, we did."

Results: There's only been one full season total of actual results between House and Knowles but because there remains the upside for success, whereas we already know many of the other package deals were busts, this one for now lands higher than maybe it should. Scout.com's 31st ranked prospect in 2012, House had a very successful freshman season, averaging 12.4 points and 4.9 rebounds. Scout.com's 76th ranked prospect in 2012, Knowles was ruled ineligible last season but will take the court this year.

I'm telling you, Card Chronicle University could have been fielding one hell of a squad right now.

Also, it's really weird seeing David Padgett to Kansas (Omar Wilkes?) up there at No. 8.

Perrin Johnson getting his Red Rage on last Saturday: 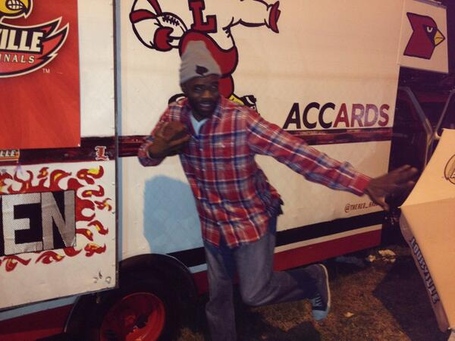 Rick Bozich sits down with Tom Jurich, who then presumably held a knife to his throat while he wrote each word of this. 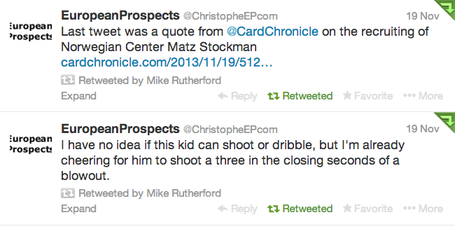 I realize this isn't much use to you now, but here's DJ KDogg's week six tailgate mix. 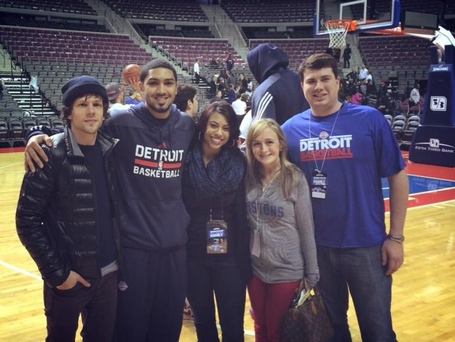 That wasn't a joke, I'm told Eisenberg sought Siva out last night to tell him what a big fan he is and ask if he could get a picture. That's just as excited as he can get. That was a joke.

Class of 2014 forward Jonah Bolden announced his list of six finalists earlier this week, which includes Louisville, Indiana, UCLA, Kentucky, SMU and USC. The 6'9, 210-pound forward is a consensus top 50 player in his class. He isn't going to SMU. 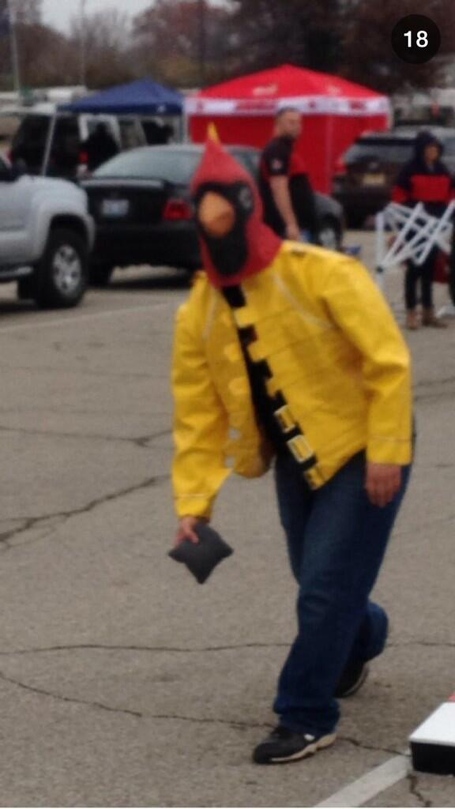 The Louisville football team is encouraging fans to bring new and unwrapped toys to the game against Memphis on Saturday. Players will be giving the toys to children in need this holiday season.

A truck from Margaret's Moving and Storage will be at Street Fest before the game and various drop-off sites will be inside the stadium during game time.

If you enjoy Mystery Science Theater 3000 as much as I do, then first of all we should hang out more, and second of all this news should be of interest to you.

Fairfield is very excited about the opportunity to face Louisville on Saturday.

"It is both an honor and challenge to play Louisville as the defending national champions and a Top 5 team in the polls," says Johnson. "Their athleticism, defensive intensity and basketball IQ are as high as any team in the country.

"The thrill that we have is to play a huge game like this in our home state," added Johnson. "Normally, mid major programs have to go on the road to have an opportunity to play high major programs. To have Louisville playing Fairfield in Connecticut is terrific for our students, alumni and fans throughout Connecticut."

SB Nation still has non-senior-day-participant Teddy Bridgewater as the No. 1 overall pick in its latest NFL mock draft.

And finally, I have a new favorite person in Lexington.

Post-Thanksgiving Christmas celebrations only forever, y'all.