Share All sharing options for: Kevin Ware Misses Court Date After Being Cited For Reckless Driving

After appearing in a 2013-14 regular season game for the first time last Friday, Kevin Ware spoke about getting over the newfound fame that followed him around all summer and "feeling like Kevin" again. On Monday, Ware received a reminder of how different things have become since the last time he took the floor in a game that counted.

In a story first reported by WHAS, Ware missed a court appearance on Monday that came about as the result of an Oct. 26 citation for reckless driving.

According to Barren County court documents, Ware was pulled over in a black 2013 Dodge Challenger at 11:04 p.m. on Oct. 26 and cited for speeding along the Louie B. Nunn Cumberland Parkway, Interstate 65 in Glasgow. The police report states he was driving 95 miles per hour in a 45 MPH zone. The police report says Ware "politely said there was not" a reason for his speeding.

When asked about the missed court date during his weekly press conference, Rick Pitino said it was the first he had heard of it.

"I was not aware and that is his business," Pitino said. "That has nothing to do with basketball. Parking tickets, speeding tickets, I don't encourage getting either one and I'll talk to him about it. It's the first of my knowledge of it. Why he missed the date I have no idea. I'm not concerned. Obviously, I don't want anybody speeding, I don't want anybody getting parking tickets, I don't want anyone losing their lunch pass. I'm sure you're concerned about it, I'm not. He shouldn't be speeding, first of all, but that's something he has to address and if he gets his license suspended, he's going to do a lot of walking."

Via CBS Sports, Ware's police report is below: 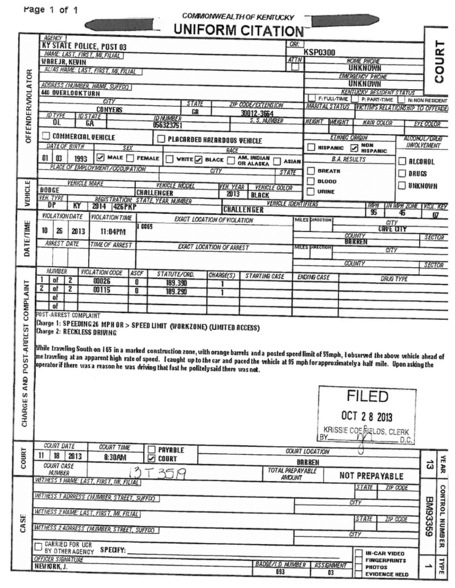 Imagine trying to explain to your 2012 self how Kevin Ware speeding in Glasgow and missing his succeeding court appearance could be national news. That said, Kevin has to know by now that each and every misstep he takes is going to be highlighted in this manner. If you like all the positive attention, you have to be willing to do the things necessary to eliminate the negative.