The Saga Of The Black Helmet/Uniform Continues

Share All sharing options for: The Saga Of The Black Helmet/Uniform Continues

Just when Louisville fans had finally stopped convulsing following the black uniform excitement from earlier in the week, Brian Luc Jean-Mary had to go and throw blood back in the shark-riddled waters Thursday night.

The U of L linebackers coach tweeted out the following picture, attached with a promise that the image would be "coming to a football field near you very soon." 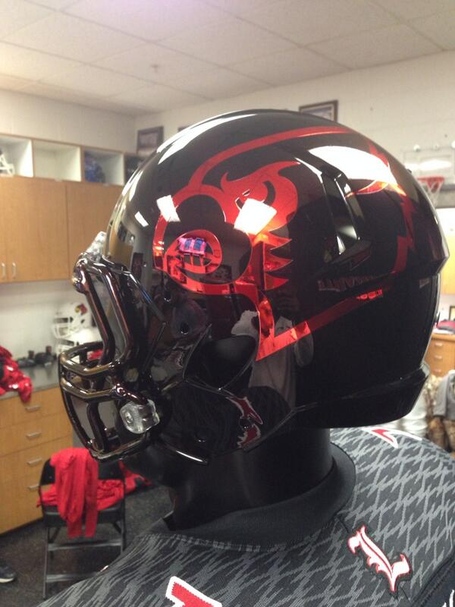 As they tend to be when lack uniforms are brought up, people were excited. Especially since this helmet (and the jersey below it) appear to be different than the model released earlier in the week.

The U of L football equipment twitter account then posted an even better shot, saying it was a model that could be used as a possible alternate "down the road." 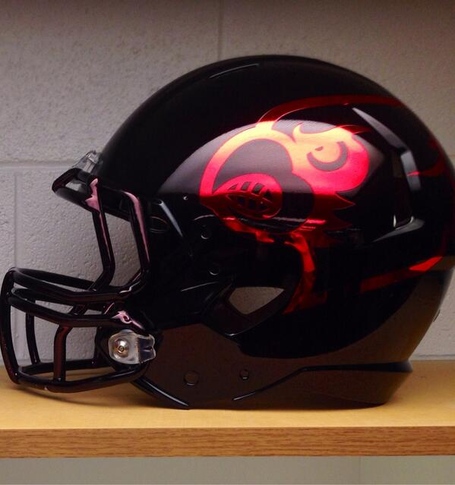 So surely, the team is wearing black uniforms on Saturday, right? Surely they wouldn't just tease something as glorious as this for no reason, right? I mean, I would wear that thing to a wedding.

We will be wearing red jersey and pant combo that we have at all home games on Saturday night. Plus the standard helmet #PackPapa

I'm still a little bit cautious of those tricksters with the football department, they've pulled stuff like this before. Selfishly, I'd love to see the team come out in all yellow just to witness the instant cacophony of extreme reactions.

More updated on Uni Watch 2013 as they become available.