Luke Patrick McDonald got his first taste of tailgating earlier this season, and it only made him hungrier for more.

As far as the "potential future news" mentioned last night is concerned, here you go...

You can fill in the blanks, but this is absolutely the reason the early signing class was not discussed (as had been planned) on Thursday afternoon.

The U of L women unleashed the boom in front of a huge crowd Thursday night, running away from No. 14 LSU, 88-67. The Cards will now face either Oklahoma or Gonzaga in the championship game of the preseason NIT.

Luke Winn updates his power rankings and drops Louisville from No. 1 to No. 2, which is understandable given Michigan State's performance Tuesday night.

Based on his juco stats at Northwest Florida State, I did not expect 5-foot-9 guard Chris Jones to be an overwhelmingly efficient player in Division I. Jones was a force-the-issue guy at NFS, taking an estimated* 32.6 percent of his team's shots with an assist/turnover ratio of 4.2/2.9. He had five or more turnovers in 10 of his 32 games last season.

But in his first two games at Louisville, Jones has played 55 minutes while dishing out 12 assists against zero turnovers. He's acting like Jordan Taylor -- and Jones has even dialed back his shot-taking (to 27.8 percent) to accommodate for the high-usage presence of Russ Smith. The opponents will get tougher than College of Charleston and Hofstra, but if the Cardinals' starting backcourt keeps playing this well, I propose this as their theme song:

Smith and Jones Forever, together forever and ever ...

Your first U of L NCAA Tournament action of the 2013-14 season will take place on Saturday at 1 p.m. when the U of L women's soccer team hosts Illinois State in the first round of the big dance...a term which I'm assuming can extend to soccer.

Listening to this Charles Gaines post-practice interview will be the best decision you make today.

Eric Crawford with some more details hinting that Tom Jurich might be Batman.

The 1983 Louisville football media guide was cooler than anything any of us have ever done. 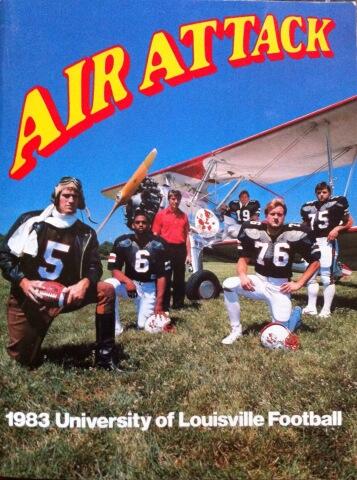 Through four games, Rakeem Buckles is averaging 19.8 points and 11.7 rebounds for Florida International. Couldn't happen to a better kid, just wish it was happening for a team that could play in the postseason.

Speaking of local transfers doing well, how about Ryan Harrow averaging 23.5 points for Georgia State. Forget the UK affiliation, it's good to see any kid who had such a hard time doing well with a fresh start. 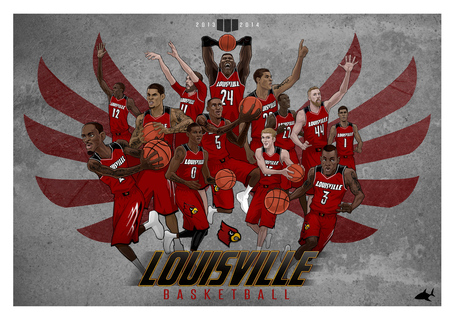 The Louisville/Kentucky basketball game might ultimately come into play when it comes time for the Cards to learn their bowl fate.

Would the football-basketball conflict matter to the bowls?

"We'd mention that to the bowls, and they'd certainly be aware of that," said Chuck Sullivan, The American's director of communications.

Added Frank Kay, who heads up the Belk Bowl's media relations: "We'd obviously take something like that under consideration."

Congrats to the Brohm family on being chosen as the first recipient of the Howard Schnellenberger Family Award for the Louisville Catholic Sports Hall of Fame induction ceremony. A very deserving selection.

Clearly, Santa Claus does not give a shit about BBN. 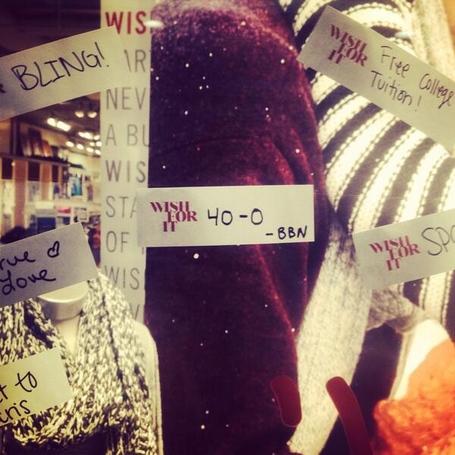 GoCards.com offers up its preview of Saturday's game against Houston.

Speaking of which, many, many jokes have been made about the free beer game, but this is the best one: 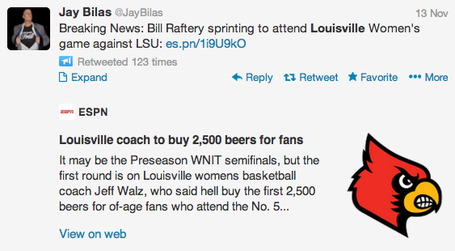 Congrats to Teddy Bridgewater, who has been named one of the 15 semifinalists for the Walter Camp Award, given annually to the best player in college football. Bridgewater was also a semifinalist for the award a season ago.

A poster on Cardinal Authority transcribed Pitino's radio show from Wednesday, which includes some solid nuggets.

A Louisville/Cornell preview which predicts that the Cards will win by 24.

If you're looking for more good stuff on Cornell in preparation for Friday night's game, check out the Cornell Basketball Blog, which I'm pretty sure has been around for about as long as Card Chronicle.

One loss has been crucial for elite football teams this season, something Louisville knows about all too well.

The AP focuses in on Dominique Brown, whose college career has included plenty of twists and turns.

Brown's status as the featured back was solidified when he got his first start this season, against South Florida on Oct. 26. He followed with season bests of 18 carries for a career-high 125 yards in Louisville's 34-3 victory in Tampa.

Brown describes his style as a straight down, forward, physical back. He says the adjustment from passer to ball carrier has finally led to a comfort zone.

''It was hard for me from a physical aspect, just getting hit every day and stuff like that, and having more plays and running,'' he said. ''After I got used to it, I pretty much felt like I found a home.''

Brown showed another dimension against the Bulls when he caught six passes for 61 yards and a touchdown.

''Dom is not only a great pass protector but he also gets out in routes,'' Cardinals offensive coordinator Shawn Watson said. ''He makes a lot of hay for us as a check down. He's proven to be really invaluable to us throughout the season.''

Hey look, Louisville is someone's college football upset special pick this week. Over here making me all nostalgic for September, 2013.

Let's all embrace and shed some proud father tears together. 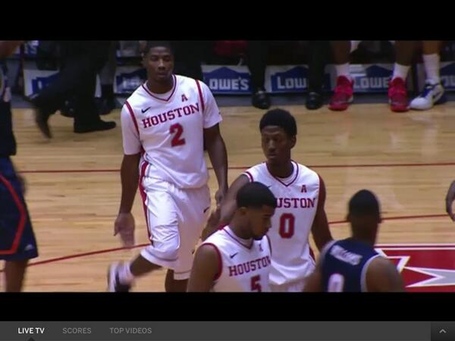 Houston is still playing as I type this, but let it be known that young Danrad made his first field goal attempt as a college basketball player.

They grow up so. damn. fast.

Your Cornell preview from the Associated Press.