I'm blown away that there are people out there - whether they're Louisville fans, Kentucky fans or objective fans - who STILL get furious over Rick Pitino's hyperbolic timetables or extreme exaggerations. Honestly, I think it's the best running joke in local sports, and if you view it that same way, you're going to have a lot more fun.

I mean, if you were in a position of power and had to talk to the media all the time but you didn't really want anyone to know the inner-workings of your program, wouldn't you just kind of make shit up every now and then? I would do it all the time, and the fact that Pitino has been doing it for over a decade now and is still able to get the same types of reactions is...well, it's just outstanding. 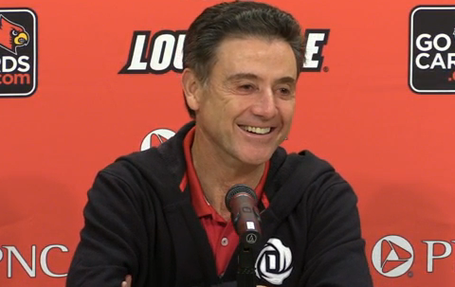 Anyway, here are your highlights from this afternoon:

--Chane Behanan will dress for Tuesday night's game against Hofstra and could play. He knows he embarrassed himself and he's done the things necessary to get himself back on the team.

--Luke Hancock has also been cleared to play by doctors. The difference is Chane has practiced and Luke hasn't. Luke will practice for the first time today. He's kept himself in great shape and is anxious to play, but I'm not sure when he's going to see the court in a game.

--Kevin Ware will not play on Tuesday. He'll play when he stops limping.

--We missed a lot of easy shots against Charleston, which I think you can attribute somewhat to opening game jitters.

--Hofstra plays a lot of zone and has a lot of great athletes. They can shoot the ball from very deep and have three fifth-year seniors so they're very experienced.

--College basketball will be better off with these rule changes. The game has looked like Wrestlemania the last few years and it's been impossible for teams to score 100 points. It's a necessary step in the right direction and the players will adjust.

--I was really pleased with what we got from our centers on Tuesday. If Stephan gives us what he gave us on Tuesday all year long, I would be more than happy.

--(On the banner in his honor going up Tuesday) I think it's awesome. I don't know if I'm deserving of any banner or any honor, but I think it's great.

--This team is not good at learning new things and digesting scouting reports. It's going to be a slow process there. They're not like last year's team in that regard. We're just trying to be a good man-to-man and a good pressing team.

--We run all day shooting contests and the other day Akoy Agau dominated them.

--Chane knew that he had to go 30 days where he wasn't late for a single thing, where he was early to everything. I'm real proud of him. Andre (McGee) dealt with him with all of that. Chane still won't be back in Minardi Hall this semester, and maybe not next semester.

--Practice has been a lot better since Chane came back because it's forced Montrezl to work more.