Share All sharing options for: Teddy Bridgewater In This Week's Sports Illustrated

Teddy Bridgewater is featured prominently in this week's edition of Sports Illustrated as the center of a piece by writer Pete Thamel.

Though you can't read the story until the magazine hits newsstands tomorrow, we can give you some of the highlights you have to look forward to:

--Playing in the pros will allow Bridgewater to fulfill a promise he made to his mom, Rose Murphy, when he was in the third grade. "When I make it to the pros," Teddy Bridgewater said, "I'm going to buy you a pink Escalade with pink rims." (PAGE 39)

--From the age of eight, Bridgewater was tabbed as a can't-miss quarterback. He excelled in the vaunted Optimist youth leagues in Miami and later at Northwestern High. It was there that he became a top college prospect and did so while his mother was battling breast cancer. Now a junior at Louisville, he's the nation's third-most efficient passer on the No. 8 team, a Heisman Trophy candidate and the potential No. 1 pick in the 2014 NFL draft. "His mother's situation made him a grown man," says Northwestern coach Billy Rolle, "and I think that helped him out more than any coach could." (PAGE 40)

--Bridgewater worked hard to avoid the stigma that South Florida produces any athlete but quarterback. He wound up a Cardinal after committing to and decommitting from Miami. "He wanted to be a quarterback," says Louisville coach Charlie Strong, "not an athlete who's a quarterback." (PAGE 40) 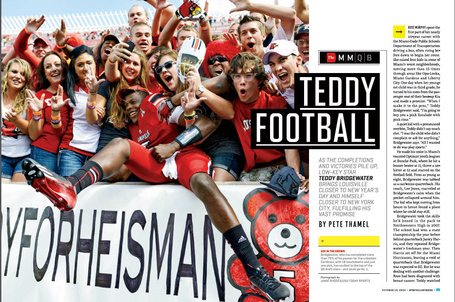 --After working extremely hard with Louisville offensive coordinator Shawn Watson between his freshman and sophomore seasons, Bridgewater led the Cardinals to an 11-2 season and was named Big East Player of the Year last season. He earned a reputation for not only being very accurate but also tough. He played through injuries, and shook off a nasty hit early in Louisville's Sugar Bowl win over Florida last year. He has become a more willing leader. "This is his football team," Strong says. "He knows this, his team will only go as far as he takes them." (PAGE 42)

--While Bridgewater has a season of eligibility remaining, he'll graduate this year. His descision to enter the draft seems like a foregone conclusion. "The reality is that we're hoping and believing that he has a great season," says Rose, "and after that he'll do what he needs to do to prepare to go to the draft." (PAGE 42)

--Thamel finds that Bridgewater is very humble on and off the field. For instance, he asked Louisville not to run a Heisman campaign for him because he doesn't want special treatment and he still dates his high school sweetheart. "He's one of those players who wants no credit," says Strong. "He'd rather sit back and let his work speak for him." (PAGE 43)

--Bridgewater may not get as many Heisman and Twitter mentions as Texas A&M's Johnny Manziel, the two are "not in the same universe" as NFL prospects, says former Eagles scout John Middlekauff, who adds, "You build a franchise around high-level people as much as high-level players." (PAGE 50)

Good stuff, although I'd just as soon everyone stay away from "Teddy Football" as a nickname. Let's stick with "Teddy Ballgame" or "Teddy Heisman" or "Pierre." "Pierre" is a wildcard, I'm aware of that, but sometimes those work.