Rick Pitino And The City Of Louisville Dig Card Chronicle

Share All sharing options for: Rick Pitino And The City Of Louisville Dig Card Chronicle

A handful of thank yous are in order this afternoon before we dive any further into anti-Rutgers abyss.

First, a thank you to Coach Pitino for his kind words on ESPN 680 this morning and to all of you who shot me messages about it. Talking to Drew Deener, Pitino stated that "those Card Chronicle people (raising a glass your way, anonymous ticket spammers) just do a fabulous job of bringing insight into Louisville, football, basketball and all the sports."

If you need me, I'll be adding that "fabulous" to the miscellaneous section of my resume. Pray some interviewer asks me to explain why it's there.

Pitino also hurled some much-deserved praise in the direction of Crum's Revenge, whose videos of the championship run apparently make the coach so emotional that he can hardly stand to watch them. You can listen to the entire interview here (fun starts around the 12-minute mark). Once again, Louisville Rick is the best Rick.

Second, a big thank you to the readers of LEO Weekly for once again showing the site and myself some love in the annual "Readers' Choice" issue.

While Card Chronicle didn't repeat as champions of the "Best Blog" category (Louisvilleky.com - a site with like three stories over the past six weeks and no commenters, but whatever...I'm not bitter - took home the honor), we did come in second. A few more references to made-up bands that we enjoy but you've probably never heard of and IPAs over the next 12 months should put us back on top.

Additionally, the @CardChronicle Twitter account was voted the second-best in Louisville, and I was voted the third best Feature writer for a second straight year. You can check out all the winners and runners-up (and second runners-up) right here.

While it would be cool to get back to our winning ways next year, I sincerely hope that I place third in the best feature writer category from now until eternity. I don't want to win, I don't want to be second, I want to be third. Every year. Even if I have to stop writing entirely because I'm pennyless and void of access to the Internet, I want to be voted third. Should I die, God forbid, "Fifty-Three Time Defending Third Best Feature Writer in Louisville" would look outstanding on my headstone. Apparently I'm going to be 81 when I go...if I go.

While these accolades all made me feel cozy, I was disappointed that we fell short of reaching our primary goal...

Pretty sure those other two already have their face on a building. C'mon, Louisville. Also, Russ Smith did not make the top three for Best Chef, nor did Gorgui Dieng place in the Best Fish Sandwich category. Once can only assume the editors made the executive decision to bounce those ballots.

Although this sort of makes up for it: 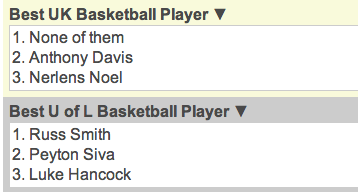 In all seriousness, thanks to everyone for your votes and for your continued support.