The Cards and Scarlet Knights are both dealing with injuries heading into Thursday night's showdown.

Speaking of which, here's hoping this is DeVante saying that his shoulder is 10,000%.

I'll just say that if Cheese From 324 DBG is leading us astray here, it'd be the first time.

The computers aren't doing Louisville any favors in Jerry Palm's BCS projections, which have the Cards at No. 11. The first actual BCS standings won't be released until Oct. 20.

The Louisville-Rutgers rivalry may be one with a short history, but it's certainly been eventful.

Rutgers coach Kyle Flood is in his second season since being promoted when Greg Schiano took over the Tampa Bay Buccaneers. He has seen this rivalry grow since 2005, when he was the Knights' offensive line coach.

"I forget who I heard say this: Rivalries can't really be forced," Flood told The Star-Ledger of New Jersey. "They happen because you play a certain program over time and the games are competitive and there are wins on both sides, which there have been."

Here's video of Rutgers coach Kyle Flood meeting with the media for the final time before Thursday's game.

Apparently there will be a feature story about Louisville, with a focus on Teddy Bridgewater, in this week's Sports Illustrated 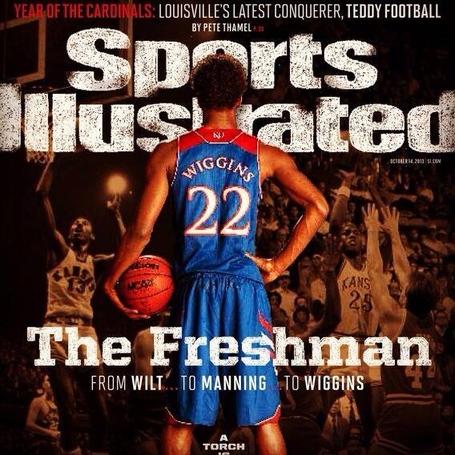 U of L quarterback commit Ross Trail suffered what appeared to be a scary head injury during a game last Friday, but his father says his son is doing just fine and suffered only a pinched nerve.

Teddy Bridgewater checks in at No. 6 in ESPN's total quarterback rankings.

The players and coaches are starting to feel it.

I Can Already Feel The Energy #BeatRutgers #LetsGo

Let's make this the loudest game in the history of papa johns stadium from start to finish !!

Shoni Schimmel is one of 25 players who have been named to the 2013-14 preseason `Wade Watch List' for the Women's Basketball Coaches Association's National Player of the Year.

The New York Giants are the latest team that might be getting involved in the Teddy Bridgewater sweepstakes.

The AAC checks in at No. 6 in ESPN's first conference power rankings, well behind the fifth-ranked Big Ten, but also well ahead of the seventh-ranked Mountain West.

Rick Pitino says Luke Hancock will likely return to practice by the end of the week, and Hancock himself says that if there was a game tomorrow, he would play.

Jeff Goodman took in a Louisville practice on Monday and was willing to offer up the following observations: 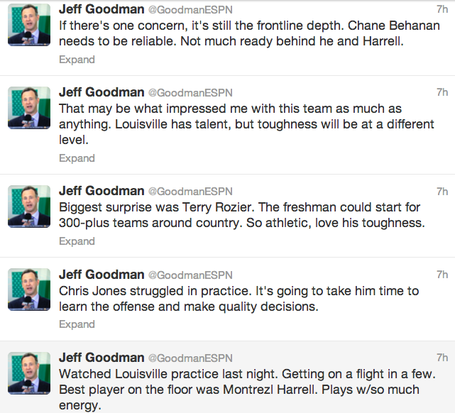 There have been plenty of good Louisville teams over the years that I think we can all agree were "out-toughed" or intimidated at times against teams they should have otherwise been able to handle. It's comforting to know that once again, that won't be an issue this season.

Also, Terry Rozier as the fan base's collective crush is easier to spot than a Steve Kragthorpe jet sweep.

There's an awful lot of deja vu going around New Jersey as Rutgers prepares for another potential "statement game" against Louisville.

Here they are, again, with the game that can lift them into the national conversation, again, against Louisville on a Thursday night. Again.

The narrative around Rutgers football never changes, just the names on the back of the jerseys. Now, instead of Greg Schiano, it is Kyle Flood pushing the same rock up the same hill, thinking maybe, just maybe, this will be the time that it doesn't roll back down.

Rutgers has a Scarlet Knight as its mascot, but sometimes, Sisyphus would be a better fit.

So will this year be any different? Will this be the big breakthrough, the major bowl trip, the return to the top 10 and all that? Will we finally be done asking these same questions and writing these same columns?

Kenny Klein said in a phone interview Tuesday that U of L has "no next step planned" regarding possible discipline of lacrosse coach Kellie Young, who was accused of abuse by former and current players and parents in a C-J story earlier this week. 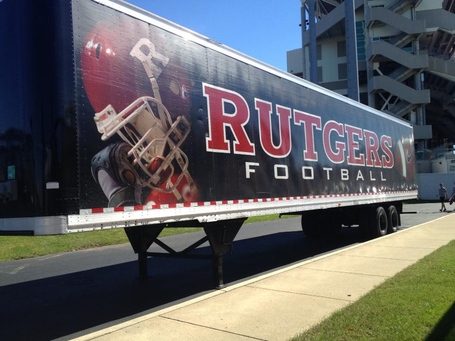 That's a pretty cool truck though, for real.

"If (Bilal) Powell is not the most underrated player in this league, I don't know who is. What a tremendous player." - Coach Rex Ryan, after Powell gained 38 yards on 12 carries, including 6 yards on the last play that set up the Jets' game-winning field goal.

It's almost like 2007 me is coaching the Jets. Except I'm more of a calves guy.

Florida International beat Southern Miss last weekend. I assume this fact will end any and all schedule criticism.

But seriously, we beat an FBS team which defeated another FBS team by 72 points. That's...something. Also, I realize the wording two sentences ago was awkward, but I trust you guys enough to know that you'll get the intent and not criticize. You guys have always been cool.

Sports Illustrated lists both Charlie Strong and Tom Jurich as two of the top five candidates to make a move to Austin.

3. Charlie Strong, Louisville. His SEC pedigree and his ability to bring toughness to the program would be ideal. (The Longhorns could afford his $5 million buyout, too). Still, Texas has never had an African-American head coach in a men's sport.

2. Tom Jurich, Louisville. He's considered one of the best in the business, and his teams have reflected that reputation of late. Jurich is more of a traditional athletic director, however, which could make him less attractive to the Longhorns, who are looking for a business-savvy leader. (A package deal with Cardinals coach Strong could loom.)

The U of L week in review is up as Louisville's fall sports teams have officially kicked it into gear.

Your latest U of L baseball fall notebook.

In news that should make everyone sad, the KHSAA took the bold move on Tuesday of banning postgame handshakes in all sports. The association said that while the move was disappointing, "enough incidents have occurred both in our state and in others, that the necessity has arrived."

Kudos to this group of Cards fans for both representing U of L in Philly and putting up with Brian Brohm. 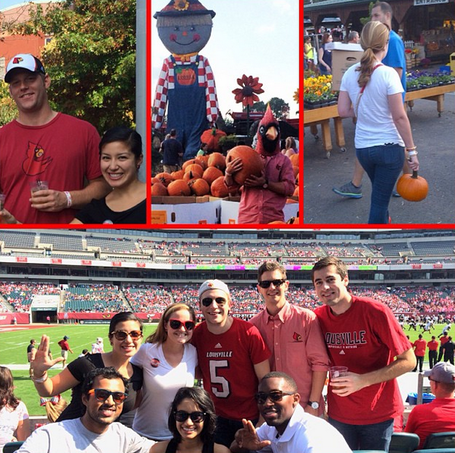 Spencer Hall's weekly alphabetical is once again an entertaining tour around the college football world.

Julio Jones is done for the season in Atlanta, which means there's an opportunity for Harry Douglas to step up and take his game and professional reputation to the next level.

Charlie Strong is one of a handful of college coaches who are starting to generate some NFL buzz.

Last year, Louisville athletic director Tom Jurich had to fend off Tennessee's overtures to Strong. He might have the same problem with the NFL one day.

"He's a credible coach that's been successful," said an NFC pro personnel director. "He's also a disciplinarian that would command and demand respect from players. Everywhere he's been he's had successful defenses. He's always seen as one of the nation's best talent evaluators. Who else would have lured Teddy Bridgewater from Miami to Louisville, Ky.?"

The Cardinal football team isn't the only squad hosting Rutgers this week. The men's soccer team will puts its school-record five straight shutout streak on the line against the Scarlet Knights Saturday at 7 p.m. inside Cardinal Park.

Bring a canned good to the game and you'll receive a voucher for free admission to U of L's Oct. 31 game against Saint Louis. All donations will go to Lord's Kitchen.

Louisville water is so good that it's getting its own $2.8 million museum.

Master P was in the Yum Center on Tuesday night and took on Chris Jones in a little 1-on-1. Because six-month national championship anniversary. 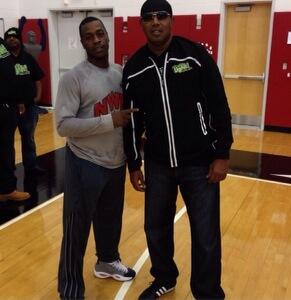 Yahoo's look at week 7 in college football starts with a quick preview of Thursday night.

Rutgers at Louisville: Teddy Bridgewater gets a chance to have a Heisman moment on a national stage, and it's one of the few times this year that the Cardinals will be in the spotlight. While the Scarlet Knights barely hung on to beat SMU this past week, they have the firepower to score if the game turns into a shootout. But will Charlie Strong's defense put up enough resistance?

Louisville is one of 15 teams that can become bowl eligible with a win on Saturday. It's insane how much bigger a deal that was when we played Rutgers in the season-finale with the same achievement at stake three years ago.

Central Florida is actually wearing these to play basketball in this season: 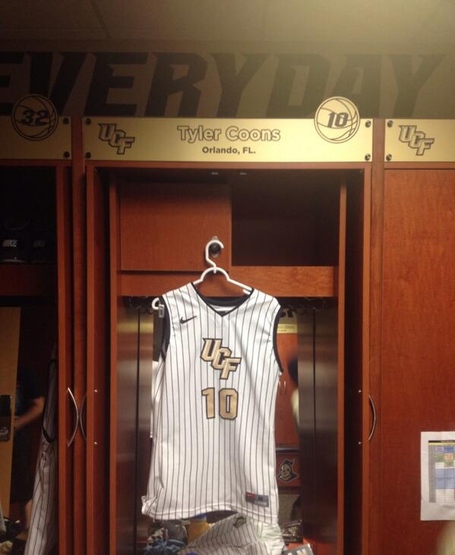 TSN has Teddy behind only Tajh Boyd and Johnny Manziel in its latest Heisman rankings.

The Big Lead says Louisville would be the No. 6 seed taking on Clemson if college football had an 8-team playoff this season.

How is Louisville a 6-seed? Teddy Bridgewater and preseason hype, but also, dating back to last season, the Cardinals have a very strong, well-coached team. Probably deserve the 8th seed based on the resume, but I like that Jamies Winston is from Alabama and could knock off the Tide in an enticing matchup. Why not Louisville 7th? Because Oregon/A&M would definitely be a 59-56 barnburner.

It seems Cardinal fans with seats in the flight deck are going to be out of luck on the rally towel front.

Louisville is 11-3 all-time on Oct. 10 (which is the day of the game on Thursday), the only date on which they have won more than 9 games.

Rutgers' young secondary has been through a lot already, but they know they haven't yet faced a challenge as sizable as the one Teddy Bridgewater provides.

"We've been through a lot so far," redshirt freshman cornerback Ian Thomas said. "It seems like we've faced just about every test you can face. It's only five games, but we've seen a lot this season."

Bridgewater likely won't throw 70 times or more, the way Fresno State's Derek Carr and SMU's Garrett Gilbert did against Rutgers. But he will be precise (71.7 percent completion rate, No. 3 nationally in passing efficiency) and he will go vertical when opportunities present themselves. He also won't make a lot of mistakes, as his 16-to-1 touchdown-to-interception ratio suggests.

"You learn through experience, especially young players," said strong safety Lorenzo Waters. "This secondary has been through almost everything you can think of already. You hope that prepares you."

RU's linebackers are also gearing up for the massive challenge Bridgewater presents.

If you're an out-of-town Cardinal fan watching the Rutgers game with other fans, a quick reminder to email me (MikeRuth5@aol.com) your spot if you want it included on tomorrow's "where we're watching" post. Or you can simply post the location in the comments.