Louisville fans were already going to be jacked up for Thursday night's game against Rutgers, and now they'll have something to wave in order to exercise that aggression.

According to the folks at U of L, 40,000 "rally towels" will be waiting for fans on their seats when they arrive Thursday night. 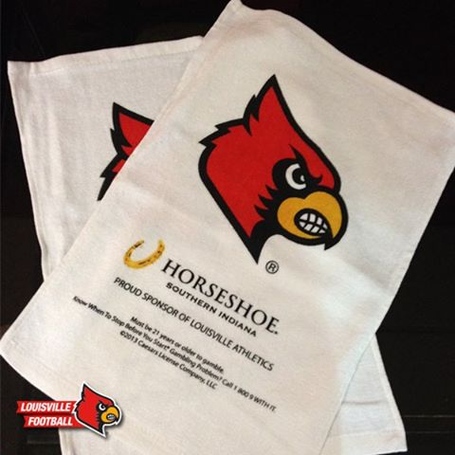 Now please don't be the guy or girl who steals someone else's rally towel. And if you see such criminal behavior taking place, feel free to document it.

Also, and I shouldn't even have to say this, but don't use the rally towel in any sort of phallic manner on national television. We had this discussion two Septembers ago with the thunder sticks, and for SOME of you, it fell on deaf ears.

And to answer the question before it becomes any more wide-spread, there is no (insert color here) out planned for Thursday night.

Go Cards, go rally towels, go having to be 21 or over in order to gamble at Horseshoe.