Aaron and Heather Bishop's wedding this past weekend had a decidedly-Cardinal feel.

While Louisville might be heading into its biggest game of the season without one of its brightest stars, Rutgers is getting one of its best players back just in time for the showdown.

Despite being the only team in college football that hasn't trailed for a second this season, Louisville is just the 8th-best team in the country according to the pollsters. Charlie Strong disagrees.

"I tell my team that every day," Strong said. "We're the best team in college football. I want them to understand that. You have to."

A positive shot is what Louisville needs Thursday. Crisp, clean throws by quarterback Teddy Bridgewater. A receiving corps primed to show it will be business as usual even if DeVante Parker misses the game with his injured shoulder. More power running from the three-back rotation.

Rutgers is averaging 40 points per game. The Scarlet Knights have scored at least 28 in all five games. Hold this team to two touchdowns or less, and Strong will have something to talk about. The coach is ready.

"I look at what we have," Strong said. "I look at us on offense - you have an outstanding quarterback, a really good set of wide receivers, an outstanding offensive line. On defense, you have a defense that's playing very well right now. It's all about convincing them. ... I want them to realize they are a good football team.

"I've been saying that to them since the pre-season. You've got to come with something positive with all the negative that's being said about them."

Speaking of Louisville being the only team in the country that hasn't trailed yet, the Cards have also accounted for 84.02% of the points scored in their five games. That's the highest percentage in the FBS.

A pair of longer highlight videos from Saturday's scrimmage: 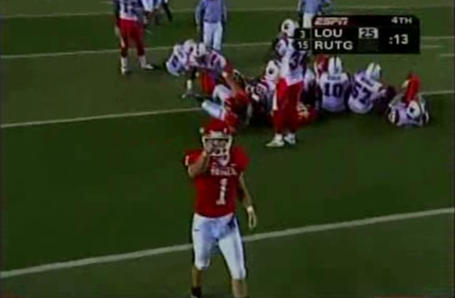 We could win 75 in a row over these guys and it still wouldn't feel like enough.

Sam Cassell Jr. announced last week that his recruitment was down to Louisville and Connecticut, but now U of L has come out and said that they are no longer pursuing the JuCo guard.

Chris Jones is one of the biggest x-factors of the 2013-14 college hoops season.

Chris Jones, Louisville: I'm not sure that people truly understand just how valuable Peyton Siva was to Louisville last season. He was the guy with the ball in his hands at the end of a clock, he was their leader and play maker, and he was a perfect fit for what Rick Pitino wanted defensively. More importantly, Siva was a calming influence alongside Russdiculous. Those are mighty big shoes for Jones, a one-time Tennessee commit and the best JuCo player in the country a year ago, to fill.

Louisville drops from No. 5 to No. 9 in this week's UPS Team Performance Index, which means they're no longer my favorite set of obscure rankings and that I will not be posting the full top 10 this week.

The U of L men's soccer team set a school-record by notching its fifth-straight shutout with a 2-0 win over SMU Sunday night. The Cards have not allowed a goal since the first half of a Sept. 15 win over Cal State Bakersfield.

Teddy Bridgewater checks in at No. 5 in the latest poll from Heisman Pundit, which says Bridgewater needs to start going from "great" to "amazing" if he wants to make it to New York.

Bridgewater dropped a spot this week because, while he had a very nice game against Temple, he's not going to win the Heisman by having a bunch of very nice games. Given the paucity of quality opponents on his schedule, he needs to start having amazing games. Right now he is on pace to pretty much do what he did last year, but that's not going to be enough to get to New York.

This is fantastic, and would be that much more fantasticer (word) if I had a bar. 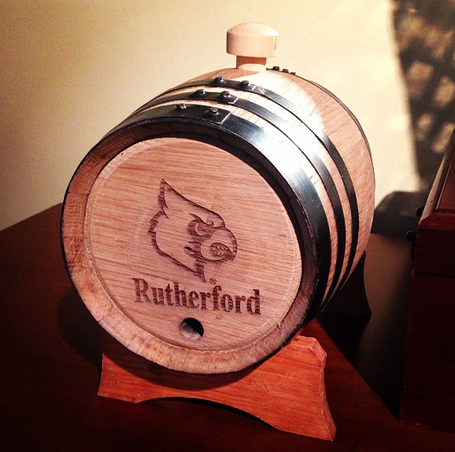 The C-J's Jonathan Lintner is the latest to look at the curious case of James Quick.

For those who have been wondering about Russ Smith's apparent internship with WHAS, here's your explanation.

Harbsmeier had the internship approved and said her "next call was right back to U of L and I said, well, we have (WHAS' parent company) BELO pay our interns. Does that work? Everything went through compliance."

U of L had phoned in just one other such favor to Harbsmeier, she said, and that was to see about a spot for Haley Jurich, daughter of athletic director Tom Jurich and a former member of the Cardinals' field hockey team. That deal worked out, and Harbsmeier said she saw signs Smith would do well at one of his first assignments, an early season soccer game.

"Of course, kids started recognizing him and wanted autographs," Harbsmeier said. "To me, this kind of spoke volumes about the kind of guy Russ is. He said, ‘I'm working right now, but if you can just hang out, as soon as I'm done I'll come see you.' And I'll be darned if he didn't do that.

"He's got a great personality when you meet him. What you see is really Russ. He's not this jokester all the time - very inquisitive, has questions and is genuinely interested in pretty much every facet of what we do here at the television station."

There will never be another.

The AP wonders aloud whether Teddy Bridgewater can win the Heisman playing against the schedule he's been assigned.

This is getting so old that even the "are people talking about Louisville's schedule?" jokes are tired.

Someone spotted this chair on UK's campus. 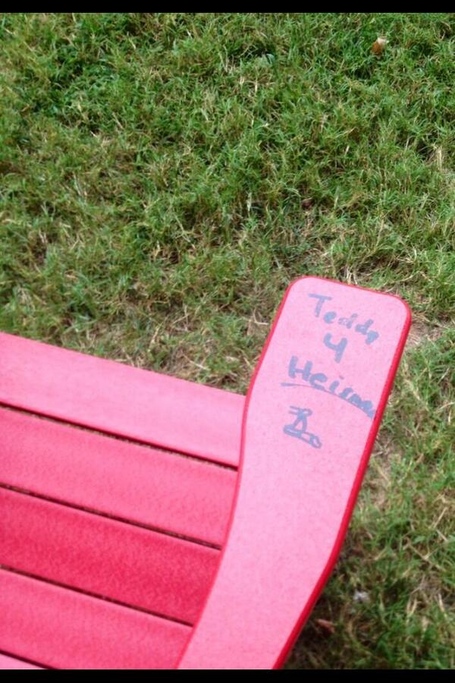 For legal purposes, allow me to say that I am, by no means, advocating the defamation of public property.

THE ANTI-BAYLOR: Louisville's defense continues to sparkle. Through five games, the Cardinals have given up just four touchdowns and a pair of field goals. Louisville thrashed Temple 30-7 on Saturday, maintaining its lead as the nation's leader in scoring defense at 6.8 points a game. Oregon is second at 11.8 points, and the Ducks haven't given up more than 16 points during their current four-game winning streak over BCS-affiliated opponents. 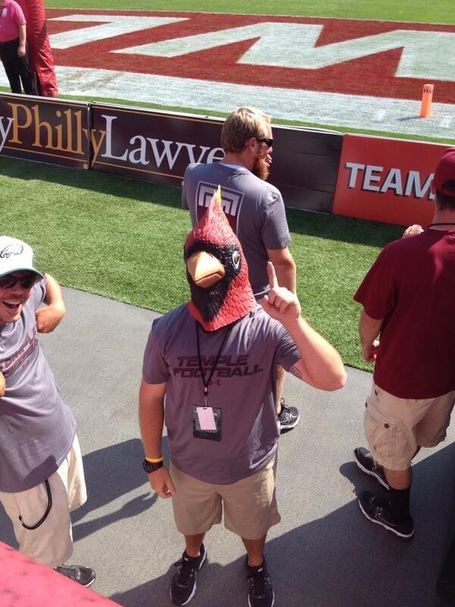 U of L has announced that it plans to take no disciplinary action against women's lacrosse coach Kellie Young, who has been accused of utilizing abusive language and tactics with players.

Cardinals athletic spokesman Kenny Klein said Monday the school has addressed matters involving Young, accused by six current and former players and a group of parents of running a program amid a culture of fear in a report in the Courier-Journal.

Klein also disputed several allegations against Young in the report, such as making a player with an anterior cruciate ligament injury do 250 pushups in an airport terminal as punishment and telling two teammates to sign a contract saying they wouldn't speak to each other.

Louisville athletic director Tom Jurich has told Young to stop cursing around players, telling the newspaper she had done "a good job."

Louisville President James Ramsey declined to intervene, saying in a statement that he had discussed the matter with Jurich and expressed confidence that the AD would "handle it appropriately."

Player and parent complaints about Young were raised as early as 2012 with former Louisville assistant athletic director Julie Hermann, who is now Rutgers' AD. Hermann was hired in May in the wake of an abuse scandal involving former Scarlet Knights men's basketball coach Mike Rice; just before taking the job in June she faced allegations from former Tennessee volleyball players of being verbally and emotionally abusive toward them as Volunteers' coach in the 1990s.

The rest of the country is eager to see how Louisville responds to being tested.

Another updated NFL mock draft has Teddy Bridgewater going No. 1 to the Jaguars.

You knew Mike Marra was going to go big with his national championship tattoo. 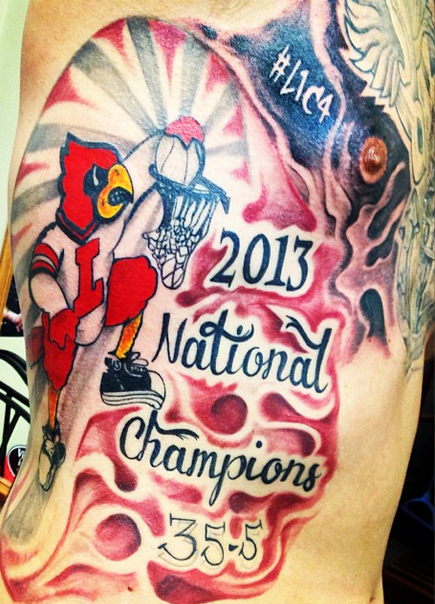 Your unbelievable asshole of the day.

The Louisville field hockey team improved to 10-2 and extended its win streak to six games with a 3-0 win over Indiana on Sunday.

Rutgers isn't worried about being the underdog on Thursday.

"It was really our Tuesday practice in preparation for Louisville, a tremendous opponent," Flood said after last night's practice. "Coach [Charlie] Strong is as good as a coach as there is in the profession, probably the best quarterback [Teddy Bridgewater] in the country. One of the more talented teams in the country in general."

Louisville is ranked 8th in the country and the 5-0 Cardinals have been installed as 17-point favorites in Thursday night's game against the Scarlet Knights.

"I don't really look at the spread like that," said starting linebacker Kevin Snyder. "Now that I know it, it's not a bad thing because I think we are going to surprise a lot of people."

Teddy Bridgewater says that Louisville and Rutgers both "hate" and "respect" one another.