The seventh-ranked Louisville Cardinals look to remain perfect by taking care of business in their AAC opener against 0-4 Temple.

Share All sharing options for: Game Day: Louisville At Temple 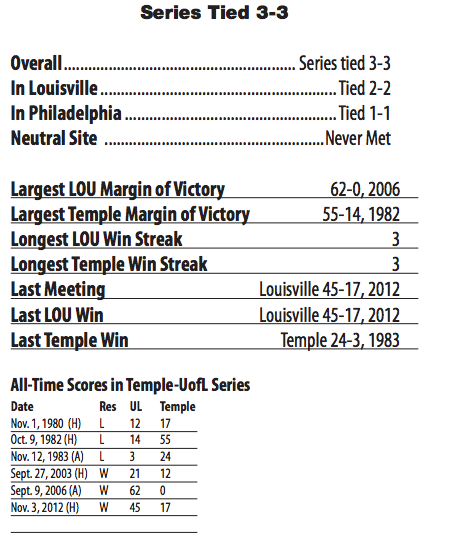 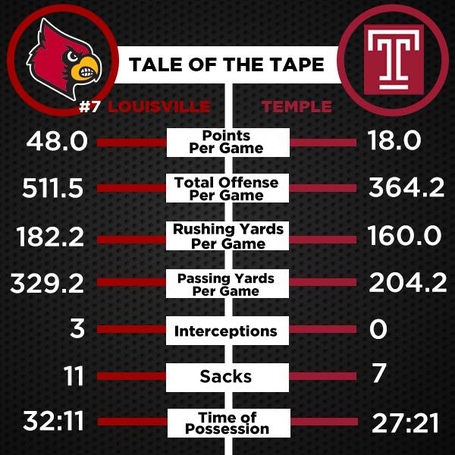 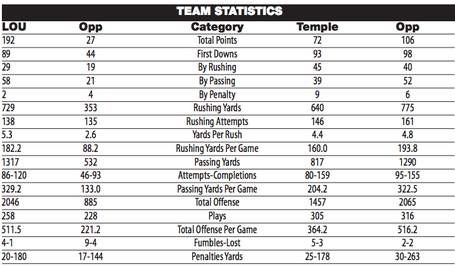 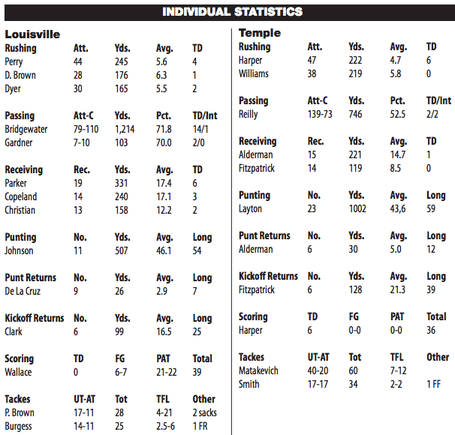 This is actually really well done and pretty entertaining. I would greatly enjoy a Louisville version.

The passing game of the Owls has been erratic at best. Starter Connor Reilly has been the main guy running the offense and he has a good amount of talent. The issue, as with most guys that haven't played much, is how inaccurate he is. Reilly has a pretty big arm and he makes decent decisions with the ball. He just doesn't always hit the open guy. Temple's offensive style is similar to last year as it is a spread concept with a solid running game. Rhule and his staff needs Reilly to get it going in the passing game if this offense is to have any success for the rest of the season, however.

Temple lost both of it's starting running backs from last year. Montel Harris and Matt Brown were a solid 1-2 punch and Harris had a very good game last year. This year, Kenneth Parker and Zaire Williams have combined to make a formidable duo for the Owl's offense. Parker is the bigger back and fits the offense well. They run a lot of quick inside runs and Parker tends to fall forward and rarely gets pushed back. Williams is an outside threat in the option game. He's had a few decent "chunk" runs and can make people miss in the open field. If they can keep the game close, Temple has enough with its backfield and playcalling to get a few first downs and keep the defense a little more fresh.

The Owl's perimeter talent is very lacking. Jalen Fitzpatrick returns and he is really still the only threat to make a play outside. Ryan Alderman is having the best season out of the receivers, but he isn't the talent that Fitzpatrick is. Chris Coyer, who started at quarterback in last years game, is a very solid tight end now and at least adds another option for the offense. The issues for this team as a whole start with this unit. They don't make enough big plays and it allows the defense to tee off all game. I don't really see that changing Saturday.

The offensive line has done a pretty good job even though they've given up ten sacks so far. They've mostly been coverage sacks. They keep a pretty clean pocket for the most part and they haven't given up a ton of negative yardage plays outside of scrambles by their quarterbacks and their quarterbacks just flat out holding onto the ball too long.

If Temple could give their defense some time to rest, they'd have won at least two of the games they lost. They would also look a lot better on paper coming into this week. When you're playing close games its imperative that your defense doesn't stay on the field too long. We've all seen a late drive in a close game and the defense just can't get a stop. Temple is very bad a two things that help a defense, scoring in the redzone and time of possession. Those two things have made it hard for their defense to stop teams consistently.

With all that being said, Temple isn't very good on defense. Yes, it needs more help from the offense, but it also has to get more stops and make big plays of their side of the ball. They don't have an interception this season. That makes them one of two teams in the entire country. That wouldn't be so bad if they weren't also the third worst pass defense in the nation, also. They get decent pressure on the quarterback with seven sacks on the season. They just can't cover anyone.

The front seven is led by the nation's second leading tackler Tyler Matakevich and all-name first teamer Blaze Caponegro. Nate D. Smith who formed the best freshman duo of linebackers with Matakevich last year has been moved to defensive end (not sure why). Matakevich is coming off a 24 tackle game and is just as legit as his ridiculous numbers indicate. The front seven has made a lot of plays behind the line of scrimmage and they do a pretty good job in spurts. But it is very hard to maintain a high level of play when you're on the field a lot and you don't have a lot of depth. Temple is insanely young and the two-deep is littered with guys that are playing in their first handful of games. The defensive backs will have to step up if they want to stay in this game. Because Teddy Bridgewater against one of the nation's worst pass defenses speaks for itself.

The AAC era begins, but I think it's the next two contests that everyone, Cardinal fans included, are eyeing. They're also the two that are going to pick the excitement meter back out of the seven range.

This will be the first game of the season that I haven't seen in person, which is sad, but I'm also excited for the other half viewing experience that I haven't had since the Sweet 16 game against Oregon.

Going back to the season's original outfit for the start of conference play. I'm not above pulling the red polo back out if today's performance isn't up to par, though. That 72-0 final speaks pretty loudly.

As of this moment, I have no clue where I'm watching this game. I have a large number of friends in town for a wedding, so it will likely be at a place of business, I'm just not sure which one. Obviously, the locale will have a large effect on the pregame meal.

It's time for the young man to snap this interception drought.

Bold Prediction: Louisville trails for the first time this season

Here's hoping the "bold prediction streak of 2013" (people are calling it that) doesn't extend to two.

This is one of legitimately two tweets I found even mentioning the game.

This Saturday will be one for the books!

And because I know you're curious, here's the other one:

#7 Louisville tomorrow on ESPN at 12, time to turn things around!! #WeAllWeGot #TUNation #TUFB

--A win Saturday would give Louisville back-to-back 5-0 starts for the first time in program history.

--Temple is hosting a top 10 team for the first time since it played Penn State in 2009. The Owls have never defeaed a top 10 team.

--Teddy Bridgewater has thrown for at least one touchdown pass in 16 consecutive games.

--Temple has not recorded an interception this season.

--Charlie Strong would become the first Louisville coach to have two 5-0 starts with a Cardinal victory on Saturday.

--A win over Temple would give Louisville its first six-game October winning streak since 1973.

--U of L is 13-0 all-time against unranked opponents when ranked in the top 8.

--With a win, Charlie Strong would join Frank Camp, Howard Schnellenberger and Bobby Petrino as the only Louisville coaches with two 7-game winning streaks in their careers.

--Temple has made Saturday's game a "Pink Out" in support of breast cancer awareness, and has asked its fans and students to wear pink to the game.

--Louisville has no players on its roster from Pennsylvania. Junior S Kamal Hogan and junior WR Kai De La Cruz, both from Montvale, NJ / St. Joseph's Regional, are the only Cardinal players from the tri‐state area.

--The average height and weight of Temple's starting wide receivers is 5'10, 190-pounds.

--When scoring 20 points or more in a game under the direction of Charlie Strong, the Cardinals' record is 28-6. Louisville is also 18-3 under Strong when holding opponents to 20 or fewer points.

--Temple linebacker Tyler Matakevich recorded a school-record 24 tackles in the Owls' loss to Idaho. He leads the AAC with an average of 15 tackles per game.

--U of L is limiting opponents to just 3.7 yards per play this season, and has allowed plays of 20 yards or more just 10 times.

--"People look at where we are and look at the team we have and they say 'OK, you guys have a good football team, but you're not playing anybody.' I tell our team all the time, it's all about how we play and we can't worry about what anyone else says." --Charlie Strong

--"We can sit here and keep saying, 'What if, what if.' It's definitely in the back of our heads, but we can't think like that. We know how good Louisville is. I can't lie to you. They've got athletes all over the place. But it doesn't matter who we're playing. It's on us. We came in Sunday about 6, 7 hours after we landed and went right back to work." --Temple LB Tyler Matakevich

--"We kind of got it in our minds that we're not the best team. We've got to keep working. There are things we've got to continue to get better at. We're going to play a good football team and we have to make sure we're on top of our game." --Jamon Brown

--"The difference between winning and losing is a fraction of an inch. It's just a couple of plays. At some point that tide will turn if we just continue to work and battle and try to make those plays. I don't think we have a fractured team psyche at all. We have a team that wants to prove it can win." --Temple coach Matt Rhule

--"I don't know that I really want them to necessarily forget about those losses. I want them to learn. Everybody plays football to make a play. That's kind of the stage we're at right now. We have guys that can make plays. They have to go do it. Against Louisville, they better." --Temple coach Matt Rhule

Temple isn't going to compete for an AAC title, but they're nowhere near the FIU-esque squad that some have made them out to be this week. Still, maintaining focus and generating enthusiasm in what is certain to be a lackluster environment would appear to be U of L's tallest tasks today. The Cards dominate, but Strong talks about the need to be better afterward.