Derek Smith broke his left femur last Saturday in a freak water slide accident and will be unable to attend any football games for the rest of the season. His spirits remain high, and he hopes to make it out to the Yum Center for some basketball before the end of the season. Also, if you're going to break a femur, I can't think of a better way to make that happen than via water slide.

U of L hoops recruit Chinanu Onuaku will be announcing his college decision this afternoon at 2:30. The announcement had previously been scheduled for 5 p.m.

Russ Smith spent much of Thursday as the lead story on ESPN's college hoops page. 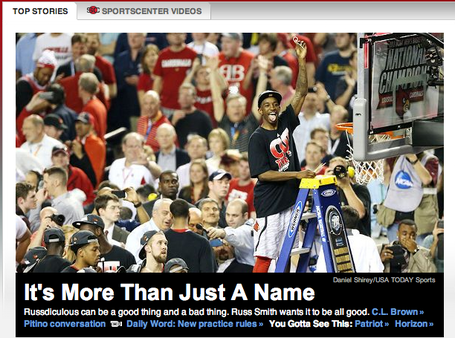 The reason was this feature piece from former C-J beat writer C.L. Brown.

Though he hasn't yet provided any insight into when he might commit, Sam Cassell Jr. has confirmed that he's down to Louisville and Connecticut.

The AP's Louisville/Temple preview capsule really drives home the intensity at play heading into this weekend.

WHAT'S AT STAKE: Not much. A five-TD favorite, Louisville would naturally like to avoid ending up on the losing end of one of the biggest upsets of the season. Can it happen? Well, in Louisville's last trip to Lincoln Financial Field, the Cardinals beat the Owls 62-0. And last year? Teddy Bridgewater tied a career-high with five touchdown passes in a 45-17 romp. Temple is looking for its first win under coach Matt Ruhle.

Sorry, I just got a little excited there. Sometimes when game gets cl--OH SH-T CAN I GET ANOTHER BEAT TEMPLE!?

YOU'RE NOT READY FOR THIS, TEMPLE.

If you live out of town and have DirecTV or certain cable sports packages, Saturday's game will be viewable on SNY, MASN and Altitude. Locally, it will be carried on WHAS-11.

Though the game appears underwhelming on paper, Saturday could be a big day for Teddy Bridgewater's Heisman campaign.

Shout out to Philly for being overly welcoming:

I would drink there. Probly strike up a conversation about cheesesteaks and Rocky. Philly friends galore in no time.

Teddy Bridgewater has ousted Jadeveon Clowney for the top spot on SI's 2014 NFL Draft big board.

When I started this exercise a few months ago, I figured one part would be easy. At least for this season, I'd never have to change the No. 1 player. South Carolina defensive end Jadeveon Clowney combined potential and production so well his first two seasons that it seemed impossible he could be unseated.

Whoops. Clowney is playing through a painful foot injury, so he gets somewhat of a pass. But he hasn't been able to affect games the way he did as a sophomore. This may be a function of South Carolina's youth elsewhere on defense. Teams running away from Clowney last year ran into much more experienced, effective defenders and realized that strategy wouldn't work. This year, running away from Clowney has produced positive results. Still, a player who tops every draft board should be able to make his presence felt more than Clowney has. So he drops from the No. 1 spot this week. But he doesn't drop too far. After all, he'll still get scooped up by any NFL team that needs a freakishly athletic defensive end-and that's pretty much all of them.

Also, Teddy's the best college football player in the country.

This tweet is the best thing the NCAA has accomplished in 15 years.

The men spent their Wednesday playing Ohio State to a 0-0 draw. They'll get their shot against SMU on Sunday night in Dallas.

Take every cent I own.

Congrats to U of L commits George Rushing, Rashawn Shaw and Michael Johnson on committing to play in Nike's Miami-Dade vs. Broward All-Star game.

It's been a huge week for the Louisville baseball program, which landed a pair of top 50 commits from the class of 2015 in Bryan Hoeing and Noah Burkholder. Dan McDonnell now has seven commitments from that class, and six of them are ranked somewhere in the nation's top 200.

The other big story is that coaches Chris Lemonis and Roger Williams have been named the 2013 ABCA/Baseball America Co-Assistant Coaches of the Year. Both were at U of L when the Cards made the College World Series in 2007, and were on the staff when the team made it back to Omaha last summer.

The only Big Blue Madness campout picture you need to see (via Beisner): 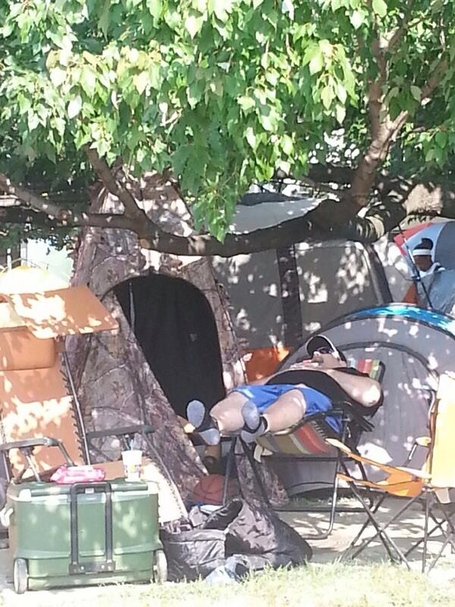 A Nation Sleeps Off A Twix Coma.

Tulsa's newspaper says Tom Jurich would be a "home run hire" for Texas.

Well, I mean, yeah. Cormac McCarthy would also be a home run hire for Card Chronicle.

Is that what we're doing? Are we just tossing around the names of people who are incredibly good at their craft and saying they would be great hires for institutions who would utilize them to practice said craft for their own benefit?

His body was forced sideways, twisted like Ivy 'round a bay window in the South. Men held women, women held children. No one spoke. Almost no one.

That was Cormac McCarthy Chronicling Russ' fall in the Oregon game...just in case you were wondering what was going on...that was it. Now I really want it to happen.

The next time you're in Chicago, head to Wildberry Pancakes & Cafe and check out their signature omelet, "The Rutherford." 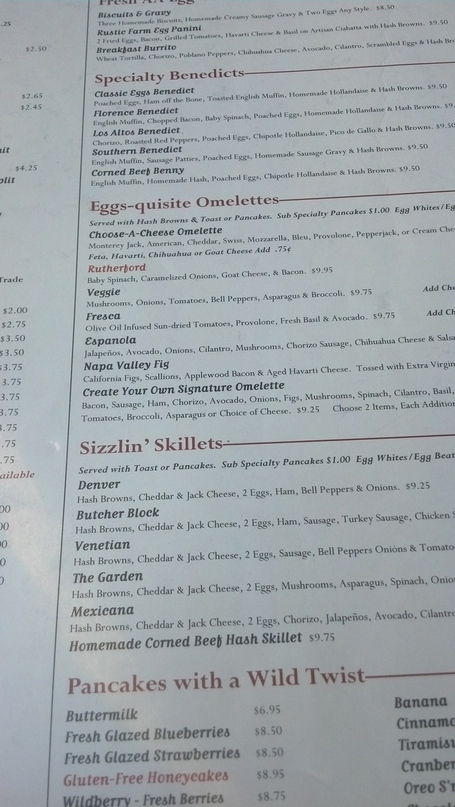 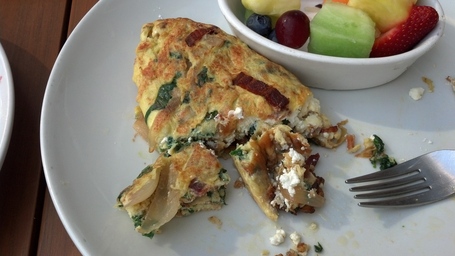 Also check out the "CCBM Filet" at Gibson's.

They don't have a CCBM Filet at Gibson's.

John L. Smith is adjusting to life after making the unheard of jump from the SEC to Division II.

Former Nappy Roots members R Prophet & Big V have teamed up for the first time in 10 years to record "I Got 5 On It," a song dedicated to Louisville football. You can listen and/or download the song for free right here.

It's nice to see that he's landed on his feet.

Athlon's "Heisman experts" drop teddy a spot from No. 4 to No. 5 in this week's rankings.

The C-J's Michael Grant with a good story on the evolution of Gerod Holliman.

The Advocate explores what really makes someone the best quarterback in the country.

Bridgewater, who is expected to be the most NFL-ready QB in this year's draft class, has been successful this season with Louisville. But, it's the Cardinals' lack of strong opponents that fails to push Bridgewater ahead of other top quarterbacks. He has thrown for 1,214 yards and 14 touchdowns in four games, all Louisville wins. Playing such teams as Ohio University, Eastern Kentucky, Kentucky, and Florida International doesn't really say much, however.

Still, come May, Bridgewater probably will be the first QB taken in the NFL draft.

That leaves us with the question of what really makes a player the best quarterback in the nation.

Insider Louisville's Mark Coomes notes that Louisville and Kentucky could pay their players $500,000 each and still make a $13 million profit.

This is why I don't trust professors. Also a gang of professors once cornered and stabbed me.

It appears that only 100 of these bad boys were made.

A great night to announce a $1M gift to the Academic Center, thank you @MakersMark & our 100 special friends pic.twitter.com/AU4BF8sp89

My assumption, and it's just an assumption, is that obtaining one would be an exercise that would fall somewhere outside the limits of my budget (rumors are 10K per bottle).

Examiner puts Louisville at No. 7 heading into this weekend.

QB Teddy Bridgewater is on pace to throw 56 touchdowns this season. This week, he will get his chance to pad his states against the Owls of Temple. This is the thing about this Temple team. They are winless and just allowed Idaho redshirt freshmen Chad Chalich to put up 400+ all-purpose yards on them. Louisville should cruise pretty easily in this one, even though Temple doesn't allow a whole lot of touchdowns when around the 20-yard line. The Cardinals are going to be defensively too strong as well, so don't expect the Owls to get much from their draw-draw-another draw run offense.

Former U of L recruit Goodluck Okonoboh committed to UNLV on Thursday night.

An extremely thorough breakdown of current U of L basketball players and who has worn their same number previously.