Even though the first U of L exhibition game always results in a horde of "Louisville basketball is back!" tweets, Facebook posts and actual spoken words, it isn't until that first real game that I feel like we truly enter the "Cardinal basketball controls everything about me" vortex.

That said, there is a mental jolt that takes place when you watch Louisville play basketball as a team for the first time. It really ushers in the notion that last season is now last season, and a new year of storylines and memories and unrivaled glory is just a handful of days away.

Much is being made over the officiating last night, and with good reason. Sixty-four fouls, 88 free-throws and a 150-minute game are all numbers that speak pretty loudly.

My guess is that we'll see games called like this (probably not as extreme, but in the vicinity), for the first month or month and-a-half of the season before things settle down. And if you think about it, it's not really unlike any other college basketball season. Every year there are these new "points of emphasis" that are called sternly during early season tournaments to make a point before the enforcement tapers off a bit. I do think that officials will continue to make cutting down on hand-checking a priority throughout the season, but I don't think that nights with 70+ attempted free-throws are going to become the norm.

The other big takeaway from the officiating Tuesday night is how much it has the potential to benefit Louisville. Just about every media member in the country has written something about the hand-checking rules taking away from U of L's ability to defend as well as they have in recent years, but no one has been talking about the fact that they also make a guy like Russ Smith nearly impossible to defend. If every game were called like the Wesleyan one, then Russ wouldn't just break the school record for free-throws attempted in a season, he'd double it.

The long and short of it is this: I think the rule change will be a huge story for the first six or seven weeks of the season before the "players have adjusted to the rule" narrative takes over. I also don't think it will have any negative effect on Louisville's chances to repeat as national champions.

We've talked about the dunks and the stats already, but the biggest thing about Montrezl Harrell last night was just how different he looked, both physically and in his demeanor.

First of all, he looks about five years older and even larger than he was a year ago, which is a terrifying thought. Secondly, he looks more confident in everything he does on the court. He doesn't panic when the ball is in his hands, he's not afraid to say something when he thinks a teammate made a mistake, and he still has that same ball-hawking desire that demanded court time as a freshman.

That young man is going to be a topic of much conversation both locally and nationally for the next five months.

Chris Jones looked predictably nervous in the early stages of the game, but then put to bed any fears that the hype was unjustified during the second 20 minutes. My guess is Rick Pitino told him at the break that he needed to go back to his roots a little bit and look more to score in the second half, because he came out firing right from the first possession.

In being the replacement to Peyton Siva (a pass-first three-year starter who left as one of the most beloved players in Louisville history), Jones (a first-year Cardinal attempting to not be a score-first point guard for the first time in his life) finds himself in an almost impossible position. It's why I think the fan base being overly critical of him - and quickly falling in love with Terry Rozier - is the most predictable storyline of the first half of the season.

If Jones isn't going to be Siva, then Louisville fans are going to want the exchange to be another guy who is as offensively efficient as Russ Smith. In the likely event that this doesn't happen (at least right away), people are going to fly off the handle a little bit. The good news is, should this event occur, Jones will have the story of 2012-13 Luke Hancock to comfort him and keep his confidence up.

All will be fine come February and March. Chris Jones has more than enough ability to get this done.

The biggest reason I wanted to go to last night's game was to see the intro video. So when I wasn't able to attend, I was selfishly excited to hear that the video froze.

I apologize for no portion of my greed.

Speaking of Russ, he was Russ. That's all you can really say.

Rotate heat and ice on that ankle, my man.

Card Chronicle is officially 1-for-1 on Paul Rogers radio shoutouts. Let's see if we can keep that streak rolling through April.

On the flip side, we are 0-for-1 on getting Drew Deener to say "penis" on the air during a game. No head-hanging. This is the year we get him, guys.

Via Heath Hawkins, the new addition to the Yum Center lobby looks glorious: 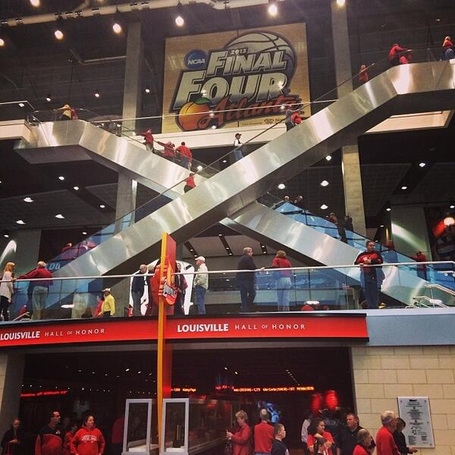 The most well-kept secret within the Louisville basketball program for the past year is about to get out: Mangok Mathiang is way better than people think he is.

With Trez's rise to prominence and the likely return of Chane Behanan, Rick Pitino doesn't need Mangok to be Gorgui Dieng in order to get this group to the places he wants them to go...but Mathiang is fully capable of becoming that player before he leaves Louisville. An improved jumper and a better feel for the game will come with experience, but that move where he put the ball on the floor twice and made a running lay-up; that's something Gorgui definitely couldn't do as a freshman.

Pitino may have struck oil twice.

Anton Gill has the potential to be Louisville's best player by the time he's a junior, but for now, that gorgeous left-handed outside stroke is going to demand playing time. I think it'll also result in a handful of 15-20 point games against teams either playing a loose zone or totally incapable of keeping Russ Smith and Chris Jones out of the lane.

We knew Gill could shoot, but the other aspects of his game appear more evolved than a lot of the recruiting experts gave him credit for. He's going to play a key role on this team.

As we already knew, Terry Rozier is very, very good. The kid has freshman fan crush written on every part of his game.

Wesleyan's Ken-Jah Bosely (the kid who hit the shot to beat Ballard in last year's state championship game) appears to be a Division-I talent, but yeah, he's not going to stop Trez from being Trez.

They got Montrel dunking on me on #SC 😂😂😔

It was disappointing that Wayne Blackshear couldn't see more court time, first because of fouls and then later because of a knee tweak.

The "Louisville needs Blackshear to become a star" talk became extinct after they won it all without Wayne ever making such a breakthrough, but it'll pick right back up again if the Cards hit a lull at any point in the season, or are forced to deal with a major injury to another player.

Late-game free-throw time will be late-game David Levitch time. Brad Gianiny, you're wanted back in town for a ceremonial torch-passing.

I enjoy the "Rise and Repeat" warm-ups.

Loved the team's reaction to the Dillon Avare three-point play. I fully believe that you need that sort of stuff early in the season to lay the foundation for a bond like the one we saw from the 2012-13 Cards.

Luke Hancock jokingly acted like he was going to check into the game at one point during the second half, eliciting the first "Luuuke" cheers of the season. I am almost as excited for his first crowd reception as I am for the first Kevin Ware ovation.

When I write posts on CC, the national championship game/celebration pictures are no longer the first ones that pop up in the photo editor tool. It's a bittersweet day, but certainly not as sweet as last year when the U of L/UK Final Four game pictures finally got bumped from the first page.

Sweet Jesus you are missed.

Tim Henderson was the lone Cardinal to not register a point Tuesday night. When the hell is that guy going to do something that helps Louisville win a big game?

Nice to see Akoy Agau do some things (8 points, 3 blocks, 3 rebounds, 2 steals) with his 13 minutes. Playing against forwards not named Montrezl Harrell has to feel like playing an impossible video game after finally figuring out the cheat code. Being reassured that not every player in college basketball is like the monster he's facing every day in the paint at the Yum Center also had to be a boost for his confidence.

SVT: shoot a three-pointer against Pikeville or you're not getting a Cardinal head blurb in the postgame write-up. That is absolutely a threat.

Make it and you're going in the headline. That is absolutely a promise.

In closing: We gon' be good again.