Outside of Harrell's dominance in the paint, the major storyline from the evening was the officiating, in particular the harsh enforcement of college basketball's new rules aimed at eliminating hand-checking. The result was 64 fouls called, 88 free-throws attempted, and a game which started at 7 p.m. and ended just before 9:30 p.m.

There was still plenty for Rick Pitino to be upset about after the game, namely the fact that U of L connected on just 32 of their 56 free-throw attempts, good for only 57.1 percent. The worst offender was Harrell, who misfired on nine of his 11 attempts.

Still, the sophomore big man was a force in the middle that the Division-II Panthers had no answer for. Had this been a regular season game, Harrell's eight dunks would have broken the U of L single-game record of seven, set by Pervis Ellison in 1988.

More on the game in the morning, but for now, here's your complete box score: 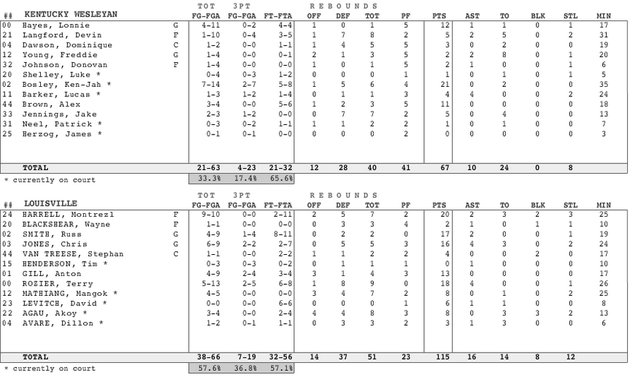