Six-year-old Madicyn's "CCBM Pirate" is the clubhouse leader for Card Chronicle Costume of the Year.

The cover for the ESPN The Magazine college basketball preview issue leaked today and revealed that the publication does not include Louisville in its top five. ESPN has Kentucky as its preseason No. 1, followed by Michigan State, Kansas, Duke and Arizona. 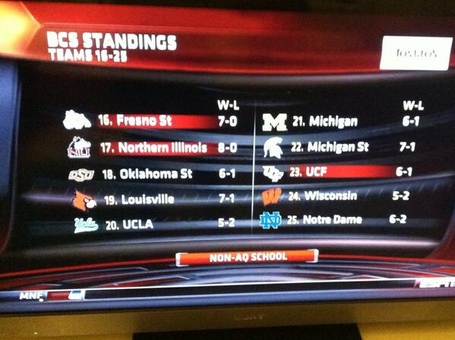 The U of L men's soccer team slipped to No. 11 in the country after last week's loss to Cincinnati, but they've still already locked up the top seed in the AAC Tournament.

The dumbest thing you'll ever hear starts at the 1:58 mark.

There was no Charlie Strong press conference this week since Louisville is off, but Strong did make his weekly appearance on the AAC coaches' teleconference, where he discussed the USF game, Nacho Garcia's injury and why Michael Dyer didn't see the field.

Although fans in New York aren't overly pleased with the news, former Cardinal Chris Smith says he earned his roster spot with the Knicks.

The UCF radio people were a tad excited when Teddy Bridgewater's Hail Mary fell to the ground a couple of weeks ago. Do not click if you're easily upset.

Five-star defensive tackle Matt Elam from John Hardin in Elizabethtown said Tuesday that his top three currently consists of Kentucky, Alabama and Notre Dame, but added that Louisville, Tennessee and Ohio State are still in the mix.

Matt Elam is not going to Louisville.

The women of the Red Rage, red raging.

If any holiday deserves a "last (weekend day) in (holiday month)" distinction, isn't it Halloween? Parents and kids are both losers when the holiday falls on a cold, dreary weekday.

We good at 3rd downs.

The Louisville women's soccer team has earned the No. 2 seed in the AAC Tournament. The Cards will host the winner of the Nov. 1 match between Memphis and Houston on Nov. 3.

Rick Pitino will appear on the SiriusXM show, "Basketball and Beyond with Coach K," Thursday night at 6 p.m. The show, hosted by Coach K (it's not just a clever name), can be heard on SiriusXM channel 91.

The U of L volleyball team stayed unbeaten with a sweep of Connecticut.

Your weekly U of L sports review: