The Cards look to bounce back from last week's disappointing loss to Central Florida by taking care of business against a USF team that is unbeaten in conference play. 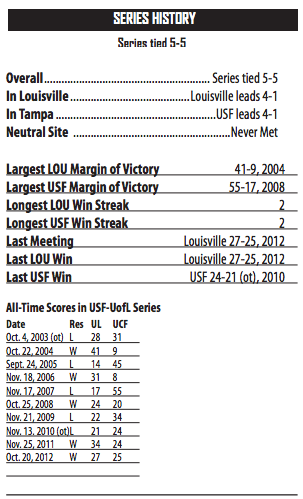 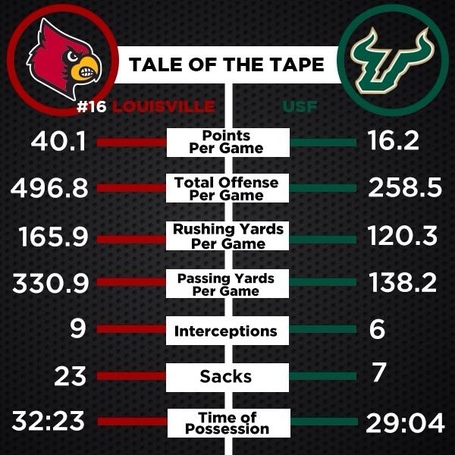 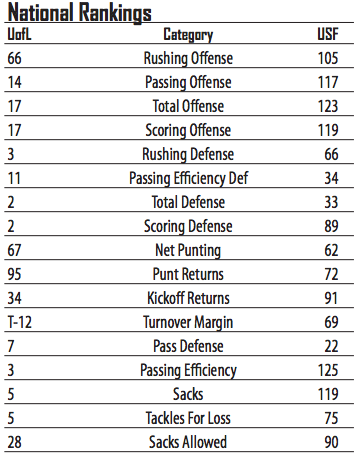 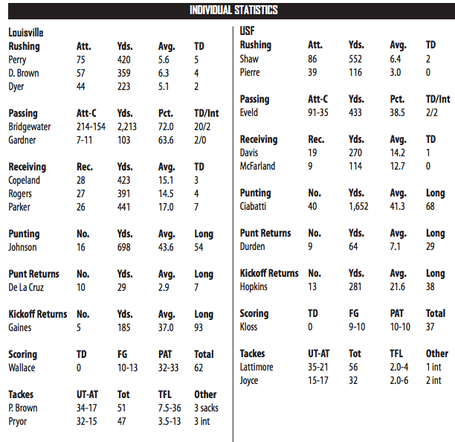 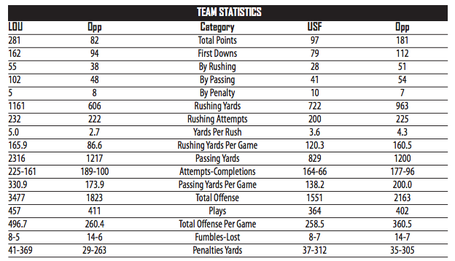 South Florida has two straight wins without scoring an offensive touchdown. 33 points and they haven't really even gotten close to scoring traditionally. That stat doesn't totally sum up the USF offense for the season, but it shows how hard it has been for the offense to be consistent. Skip Holtz only signed one quarterback during his tenure as the head coach of the Bulls, so Taggart has been left with former walk-on Bobby Eveld and transfer Steven Bench as options to run his offense. Eveld has been around for a few years and he will get the start against the Cardinals, but he hasn't exactly lit the world on fire. Eveld is completing less than 40% of his passes and he hasn't been able to find a rhthym with any of his receivers so far this year. Eveld played well two years ago against Louisville and he honestly looked much better in person in that game than he's looked on film this year. I'm not sure if it's a confidence thing or an issue with understanding the offense, but I think Eveld is much better than his numbers indicate. Even if that's not saying much.

Marcus Shaw is probably the most explosive running back in the conference and he has really been the sole bright spot for the offense. He is averaging well over one hundred yards a game and he has had multiple big runs this season. He's a small back that can make one cut and be behind the entire defense. Or, exactly what Louisville's defense has struggled with for the past few years. The best comparison I came up with was Bilal Powell in Charlie Strong's first year. Shaw hadn't had much of an impact until a new coach took over before his senior year and found a way to get him going. Shaw will be the focus of Louisville's defense and he will need help from his teammates to give him some room to make a big play here and there.

The Bulls only have one receiver with more than 9 catches this year. They barely have two receivers with over 100 yards. Having multiple players that came out of high school with four star status, leads to higher expectations than the results fans have seen. Chris Dunkley was reinstated to the team, but he has done little to make a difference. Tight End Sean Price is averaging ten yards a game. Bg play receiver Andre Davis has also struggled to make many plays down the field.

The Bulls have had terrible issues at the quarterback position, but you still expect the talent out wide to have made at least a few plays by now. Louisville's defense has still not given up many big plays in the passing game. I fully expect them to press the receivers and load up the box to stop Shaw. Davis and his position as a whole will have to make plays to give the offense some sort of a boost this weekend.

The Bulls offensive line is giving up nearly three sacks a game and they haven't done much to help the run game even with Shaw's gaudy numbers. Louisville got absolutely manhandled by UCF's line last week, so I fully expect them to bring extra motivation to the field Saturday. I won't say that the Bull's line is the opposite of UCF's, but this is an area that Louisville should be able to get back to exploiting.

I could pretty much copy and past my synopsis of USF's defensive line from my post last year and I wouldn't be far off. The major difference is that USF had four linemen last year that were rated as four star talents coming out of high school. This year, they added five star transfer Aaron Lynch. The line is one of the worst in the nation at getting pressure on the quarterback, but senior Luke Sager has been a great surprise from his defensive tackle spot. He has helped the defense do a fairly good job when it comes to making plays behind the line of scrimmage, which could help with the effort to make Louisville one dimensional.

DeDe Lattimore still plays for South Florida. Seriously. Lattimore is averaging around ten tackles a game but he hasn't made as many big plays as he had in the past. Outside of a fumble return for a touchdown, Lattimore and the rest of the linebackers haven't done much more than the bare minimum. Reshard Cliett is an extremely active guy that will need to step up in pass coverage to help stop Louisville's slot receivers from moving the chains at will.

South Florida has done one thing pretty well this season and that's pass coverage. They've given up a handful of big plays, but they do have athletes that can turn and run with athletic receivers.Mark Joyce has done a good job of flying to the ball both in coverage as well as against the run. USF will run their fair share of nickel to try to mix things up, but they haven't done much more than slow teams down. UCF slowed Louisville down enough to hold the offense to 28 points last week. USF will undoubtedly try to keep everything in front of them and try to slow everything down with hopes to keep the score close. It will be interesting to see if Louisville goes hurry up here and there to combat that.

The Bulls have four touchdowns from their defense and special teams this season, so they are opportunistic. If Louisville makes the mistakes they have made from time to time this season, the Bulls will find a way to stay in the game. South Florida's defense hasn't made a ton of big plays but they have helped the team win two straight games without an offensive touchdown. That's saying something, obviously.

Little bit of a comedown game for the fan base after the last two weeks of big weeknight home tilts.

The troops are struggling mightily this morning after last night's Halloween party festivities. I'm really hoping I don't have to make this run myself.

He's looked like Louisville's best back for the last handful of weeks and as a result he's making his first start of the season this afternoon. A performance similar to last week's could position him for a monster second half of the season.

This will now happen.

--A win wound move South Florida to 3-0 in conference play for the first time in program history.

--Today is Homecoming for South Florida.

--Louisville is just 1-4 all-time against South Florida in games played in Tampa. U of L beat the Bulls at home for the first time in 2011, when they pulled out a 34-24 victory.

--USF has won both of its conference games - over Cincinnati and Connecticut - without the benefit of scoring an offensive touchdown.

--Starting quarterback Steven Bench injured his leg in the win over Cincinnati and will not play this afternoon. Senior Bobby Eveld will start under center.

--Teddy Bridgewater has thrown at least one touchdown pass in 19 consecutive games.

--Central Florida (No. 6) and Louisville (No. 8) both rank in the top 10 nationally in turnover margin.

--Louisville has scored at least 20 points in 23 consecutive games. The last time the Cards were held below that mark was back on Nov. 12, 2011 when they fell to Pittsburgh, 21-14.

--U of L had allowed just 44 total points in its first six games before allowing 38 last week against Central Florida.

--When scoring 20 points or more in a game under the direction of Charlie Strong, the Cardinals' record is 30-7. Louisville is also 20-3 under Strong when holding opponents to 20 or fewer points.

--Louisville has failed to cover the spread in each of its past three games. It's the first time the Cards have failed to cover in three straight games under Charlie Strong.

--"It's all about the next game. You have to get back. You can't allow one loss to beat you twice. We have to get our players back and get them focused." --Charlie Strong

--"We were never going to get where we need to get because of our schedule. We still have five games to play. That's why I tell them all the time it's so important to go game by game and it's so important that you worry about the task at hand and don't worry about what everyone else says. You have to focus on who you're playing." --Charlie Strong

--"I was real disappointed (Louisville lost), not because it was Teddy, but I wanted to be the one, wanted South Florida to be their first loss." --USF DT Todd Chandler

--"We just weren't comfortable early in the season. There was too much going on. Now the vibe is totally different. There's more energy. There's more togetherness. I feel like we can do anything." --USF LB DeDe Lattimore

--"Now that you gave away one, you can bring them back and (say) when we get in those situations we can't let that happen again. You just show last week to the guys and say we can't come out like that." --Charlie Strong

--"All we're trying to worry about right now is going 1-0 (this week). We're not looking at the big picture." --USF coach Willie Taggart

--"Not only is Teddy poised, but he's smart. He can dissect a defense before the play and during the play. Most quarterbacks can't do that. You hit him in his mouth and he's going to get right back up and make another play. That's demoralizing to a defense. They all want to play against an NFL quarterback. Well, they've got a chance this week." --USF coach Willie Taggart

--"We still have a chance to end up with an outstanding season and end up the way you want it." --Charlie Strong

If USF puts a respectable number up on the scoreboard today, we've got issues.