The folks at Voodoo Five say Louisville has America's most Democratic offense.

Conway said his office coordinated its investigation with the U.S. attorney's office and the FBI. He said it was quickly determined the charges were not credible. He also said the case had no connection to the current suspension of Louisville basketball player Chane Behanan.

"The University of Louisville athletics department was the victim here. The e-mail is not credible ... First of all the so-called Melinda was hiding his identity. Secondly, the individual indicted today has a prior conviction for trying to extort a company some years ago.

"Thirdly, the activity that is proposed in the e-mail would constitute a number of crimes, including bribery and obstruction of justice. And fourth, we did take appropriate steps in looking at the e-mail and the description of some person being in custody, regarding the NCAA and point-shaving. No such person was in custody."

"This e-mail was one notch above a Nigerian cousin," Conway said.

*Waits for high-five* *Drives away listening to Iron & Wine alone* 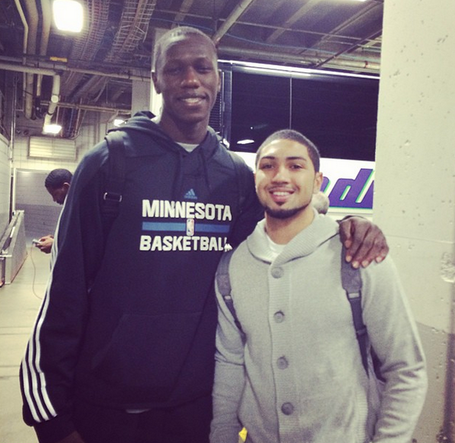 People been tweeting about "point shaving scandal". I don't even understand it. Can someone please help me with a good definition?

Thank you guys. I won't waste my time for that. My NBA career was on the line and you think I will do that non sense. That's FUNNY!

U of L's rough athletics week continued Wednesday night when the men's soccer team tasted defeat for the first time in a month and-a-half via a 2-0 loss at Cincinnati. The Cards are on the road again this weekend for a Saturday night match at Memphis.

Mark Titus of Grantland previews the AAC (and included a Brick Roll earlier in the post).

Some Louisville fans think the Cardinals will be even better than they were a year ago, either because they honestly believe this or because lying to themselves is how they cope with Kentucky bringing in the best recruiting class in college basketball history. It's too early to make bold claims like that, but I have no problem admitting that Louisville has an excellent chance at becoming the first back-to-back national champion since Florida in 2007. Its only losses from last season are Gorgui Dieng, Peyton Siva, and Siva's dad's guns popping out of his cutoff airbrushed shirt. Siva's replacement at point guard is Chris Jones, who was the best junior college player in the country last year and who should fit in perfectly with Louisville's up-tempo system, even though he and Russ Smith might combine for 40 shots a game. Siva's understanding of when to be aggressive and when to defer to his teammates will certainly be missed, but I doubt Rick Pitino is going to mind having another big-time scorer.

Meanwhile, Dieng's replacement will be fellow Sudanese big man Mangok Mathiang, a redshirt freshman who was ineligible last year. It remains to be seen what role Mathiang will play for Louisville, since there isn't an article about the guy that doesn't repeat the word "raw" 100 times. But even if Mathiang doesn't become a significant contributor, Louisville should be fine. It would lack the shot-blocker it had a year ago, but its press wreaks so much havoc and its lineup is so deep and talented that it should have no problem forcing turnovers. And after the Cardinals force turnovers, they can spread the floor on offense to let guys like Jones and Smith break down the D, kick it out to Luke Hancock at the 3-point line, and throw their arms up in celebration as Hancock applies the moisturizer.

While we're on the topic of Hancock, let's all raise a glass to him for that Final Four performance last season. In late February I made fun of Hancock for shot-faking so much, creating the Bob Knight Award just for him. The combination of his "when in doubt, shot-fake" approach, his lackluster defense, and his fantastic beard reminded me of myself, which isn't exactly a compliment. But when the Final Four rolled around, he broke out of his shell, going 8-for-10 from 3 in those two games (including 5-for-5 in the championship) while averaging 21 points. Think about it this way: When a lightly recruited freshman who averaged 7.6 minutes and 1.8 points per game (Michigan's Spike Albrecht) explodes for 17 points in the first half of the national title game, yet you're the biggest "Whoa, where did that come from?!" story, you know you've done something special.

Lindy's also previews the AAC and takes Louisville as its pick to win the conference as well.

Damian Copeland is one of the many players on Louisville's roster who will be having a homecoming of sorts in Florida this weekend.

You might think that's glorious enough on its own, but the real fun starts when you click on the "The Birth of 40-0" tab.

The story begins with an ode to Rick Pitino, a couple of shots at Tubby Smith and Billy G, and then an improper claim that John Calipari won a title in his second season (sometimes counting to three is hard). After a vivid portrayal of the Year of the Cardinal, the 40-0 folks get down to what they're really all about.

Like Lawrence of Arabia fighting with all of his will to get to Acaba when nobody could get to Acaba, we needed to believe in 40-0. It would get us through football season.
40-0.

We made an initial batch. No school logo. No saying on the back about the Final Four in Dallas 2014. A simple blue tee with white numbers: 40-0. You know and we know what it means.

We debuted the tee shirt the night of Big Blue Madness to start our campaign. Then a weird thing happened. Louisville lost to UCF after being up 28-7. Heisman run for Teddy over. National Championship dream for Louisville over. 40-0 had been born.

The real loser in all of this is Central Florida, which just found out that it had absolutely nothing to do with its biggest win in school history. How about we schedule those assholes on a day when random Kentucky fans don't come out with a basketball shirt and then let's see what happens.

In all seriousness, these will probably sell. And if the unthinkable happens at some point in the season, I enjoy Eric Crawford's backup plan. 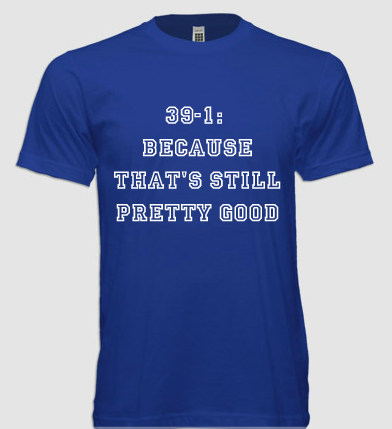 I'll say this about Kentucky fans: they never fail to deliver.

Here's your reason to love Kentucky Wesleyan coach Happy Osborne: he says if the Panthers beat Louisville in next week's exhibition that he'll one up Rick Pitino by getting a tattoo on his face.

The Sporting News' Mike DeCourcy says college basketball's new hand-checking rules could have more of an effect on Louisville than any other team.

So right now the team in the spotlight is Louisville, which won its third NCAA championship based largely on the ability to manhandle opponents with pressure defense. The Cards' press might have been the most physical ever unveiled in college basketball, surpassing the brand John Thompson Jr. employed at Georgetown back in the late 80s/early 90s.

Whereas North Carolina won the 2009 NCAA championship based on its overpowering offensive talent, the past several winners have been successful largely because they fielded destructive defenses: Connecticut in 2011, Kentucky in 2012, the Cardinals last year.

Under ordinary circumstances, the departure of shot-blocker Gorgui Dieng from a team that wasn't all that successful wiping out shot attempts-Dieng was responsible for nearly half of the team's blocks-might have led the Cards more in the direction of bump-and-run defense. If these new rules are applied, that won't be possible.

Here's the good news for Louisville, though: If opponents can't put their hands on guard Russ Smith, how will they even have a chance to guard him? In spite of what we've discussed here, coach Rick Pitino has greeted the rules changes warmly. It could be that he recognizes how imbalanced the aesthetics of the game have become. Or it could be that he realizes opponents trying hands-free to keep Smith out of the lane have no chance.

Terence Williams is headed to Turkey, where, believe it or not, he will taking the roster spot of Ramel Bradley.

Outside of my BBN friends, this is my favorite Kentucky fan ever...zero sarcasm.

Rick Pitino talks to Men's Journal about the nine principles he utilizes in recruiting. 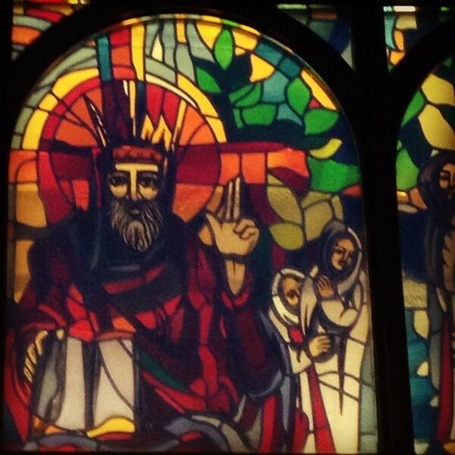 U of L men's swimming pulled a solid upset of Tennessee on Thursday.

"I told him to just keep his head up and be ready when they call his number."

A look at the ways Louisville can still reach a BCS bowl.

You can support the Louisville men's soccer team and their Halloween for Hunger effort when the Cards host Memphis on Oct. 31. 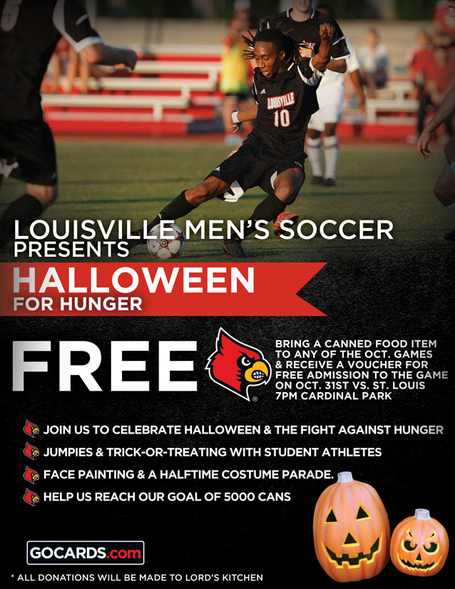 Adding insult to injury: UCF running back Storm John was sick last Friday when he played the game of his life against Louisville.

U of L's running backs have adopted a selfless all-for-one approach.

Dyer and Perry set Brown up to shine.

"(Dyer) made a decision," said Brown, who'd excelled on his own first series of the second half. "It was his drive. He said, ‘Dominique, you're the momentum. ... Go in and represent the running backs.' "

Brown said that later on, Perry - who had a critical third-quarter fumble at U of L's 15-yard line - told him: "Just put it on your back. It's your job. We're not worried about going back in. It's your show now."

In news that breaks my heart a little bit, the bleachers inside Old Cardinal Stadium will be sold for scrap.