1. Let's start things off on a positive note.

I wasn't fortunate enough to attend the Miami or West Virginia games in 2006, so keep that in mind when I say that Friday night was the best home crowd I've ever been a part of at Papa John's Cardinal Stadium. A handful of people texted me right before kickoff (this was also the first time I've ever had perfect reception and Internet inside PJCS....naturally) to ask if it was really as loud inside the stadium as it sounded on TV. The answer was yes.

It was the type of crowd this staff has been asking for since it arrived, which made the team's inability to close out a game that appeared comfortably in hand only that much more frustrating.

Maybe the marketing folks just need to give us sh-t to shake before every game, because that's two weeks in a row that the crowd has been phenomenal. Although 55,000 bird masks remains, and will always be, the ultimate dream.

2. I loved the pom-poms during the game, but that didn't stop me from chucking mine about five rows down with a Teddy-esque right-handed pitch as I was walking toward the stairs after the game. Had no desire to ever see it again. Didn't want it touching me.

My second frustration throw (yes, the ever-rare two-throw evening took place) came moments later as I was walking down the aforementioned stairs.

I had loaded up on Laffy Taffy that my friend's mom (love you, Jules) had brought to the tailgate, and in a moment of complete and utter helplessness, was in desperate need of that very treat. I reached in my right pocket, pulled out a banana, and in one motion launched it at an empty group of seats a section over. Everything was wrong with the world.

Friday's events mark the first football-related frustration throws since the South Florida game of 2010 when the now-infamous "Carmody Jersey Throw No. 3" took place. I'm pretty confident that's the longest I've ever gone between code whites. Also, kids, I'm not condoning any of this behavior.

3. From the opening seconds of ESPN's coverage: 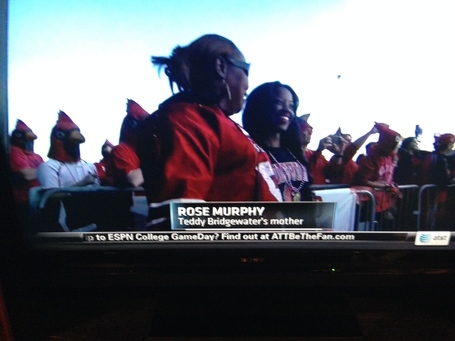 They flock to her like ants to honey. They are protectors, friends and guides.

4. When I would play the EA Sports NCAA Football games (RIP) growing up, I would always create myself and then put myself on a bad team from a major conference (think Vandy, Duke, Mississippi State, etc.). It was always more fun for me than just playing the game the way everyone else did. Maybe I was just an overly vain kid, I don't know. Anyway, even though I wanted to win every game, I also wanted it to feel at least somewhat realistic. The result was that I refused to run nothing but the same three pass plays that always worked, so I wouldn't win by scores like 88-14, and EA Mike Rutherford wouldn't throw for 805 yards and 11 touchdowns every game. Doing that felt like cheating, and cheating would have made the whole experience no fun.

Doesn't it kind of feel like we're doing the same thing with our offense? I mean, legitimately every time this team has needed a score over the past two years, they've seemed to march right down the field with no issue and get the job done. Seeing it happen so many times begs the question: Why don't we just act like the game's on the line every series? Why don't we just let Teddy rip?

I realize that the up-tempo, gaudy numbers every week philosophy isn't exactly this staff's style, but sometimes it's just so frustrating to watch a team with all the pieces necessary to play that way not doing more when they have the ball.

All that said, Louisville put up 35 points on Friday night. Had the defense kept Central Florida in the 14-21 neighborhood, then this discussion isn't taking place.

5. James Quick's touchdown was, without question, my most over-the-top celebration of the season to date.

I am a sorcerer whose powers are limited to one innocuous, Louisville football-related prediction per week. I am the lamest sorcerer ever.

Also, it was pretty clear earlier in the game that the staff thinks they've found something with Quick coming off the edge on special teams. He damn near got to UCF's first punt.

6. While there was, and still is, plenty to be upset about after the game, there are two major criticisms that I've heard consistently over the past few days that I disagree with.

The first is that the staff should have ridden the hot hand and not put Senorise Perry back in the game for Dominique Brown after UCF's first score in the third quarter. Now in the spirit of full disclosure, I said the same thing during my most agitated state in the hours immediately after the game. After letting things marinate, I don't think this is fair.

For starters, if there isn't a running back rotation, then Dominique Brown never gets a chance to become the "hot hand" in the first place. Second, history told the staff in that situation that Perry was far more likely to make a big play than he was to turn the ball over. Yes, he fumbled against Rutgers, but he also came back into the game and busted a huge run on the drive where Louisville put the game away. It's so easy to criticize that decision in hindsight, but I'm not going to lie and say that I was screaming for Brown to be in the game when I saw No. 32 trotting onto the field with the score 28-14. My guess is I'm in the majority in that regard.

The situation did lead to one of the cooler moments of the year thus far, when Michael Dyer told the staff a series later to put Brown in the game because he was running the ball so well, even though it was Dyer's turn to go in. A pretty selfless move for a guy some thought could be a major threat to the team's chemistry just a couple of months ago.

The second criticism I disagree with is the large group of folks who say that Strong should have taken the penalty and moved UCF back on their second to last drive as opposed to letting them attempt a 34-yard field goal to go up 31-28.

For starters, U of L's defense was reeling at this point. If Strong takes the penalty and Bortles throws a touchdown pass or picks up a first down, the same group of people who are mad at him now are crucifying him Saturday morning. Had the defense been dominating, then yeah, pushing the Knights back would have been the right move, but UCF had been moving the ball at will for over a quarter. Also, Shawn Moffitt hasn't missed yet this season and is probably the best kicker in (at least) the AAC. That 10 yards would have mattered much more if the opponent's kicker was a shaky one.

The other thing is Strong is making the decision with the knowledge that he has Teddy Bridgewater on the sidelines, a guy fully capable of putting the ball in the endzone and getting the lead back. And guess what? That's exactly what happened.

Again, if the Cardinal defense steps up and holds after U of L takes the lead, then this is a move that is universally praised.

7. Can't decide if I was a bigger fan of the "Ruff Ryderz Anthem" after the first score or just before Dom Brown's go ahead touchdown. Either way, DMX did everything he could Friday night. His shoulders bear none of the weight for that loss.

8. Seeing this tweet and the initial response was one of maybe 10 things in the world that could have made me smile Friday night. 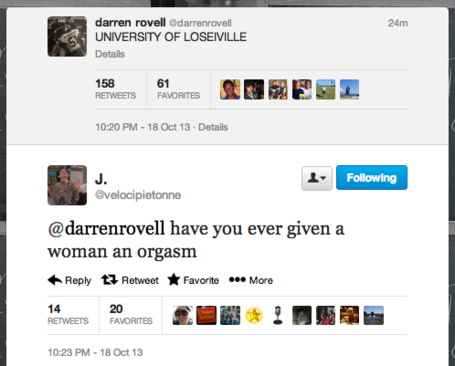 I can't figure out if I hate the 158 people who retweeted that, or if I just feel terribly, terribly sorry for them.

9. That's four straight games with a touchdown catch for Eli Rogers, who is quietly having one hell of a season. The Miami native is now just one reception behind Damian Copeland for the most on the team, is second behind DeVante Parker in touchdown receptions, and a close third behind both in receiving yards.

With Kai DeLa Cruz's status perhaps a little bit shaky going forward, Eli's going to have to continue to make big plays over the course of the final stretch of the season.

The game's five biggest negatives (outside of the obvious):

1) The ends never playing under control and consistently flying past Storm Johnson.

2) The middle of the field always being so open on key passing downs.

4) This group again not being able to locate that killer instinct when it was in a position to stomp a quality opponent.

5) The offense's inability to silence UCF when it was clear they were on the verge of getting back into the game.

2) James Quick finding the endzone and hopefully picking up some confidence.

3) The Teddy to Eli connection.

4) The play of Dominique Brown, who is now averaging a sparkling 6.3 yards per carry for the season.