The Kummer family continues the Orlando invasion. Deal with it, UCF.

Five to things to watch for tonight when the Cards take on UCF. Pants are not one of them.

It's all happening, people.

I'm just saying, I feel like in the last 24 hours this pipe dream for the ages has become a realistic possibility.

Speaking of which, your game day tailgate mix from DJ Jay Kay has arrived.

ESPN's Myron Medcalf says Chane Behanan blew his opportunity to step up and be a leader on a team that could repeat as national champions.

Behanan was on that podium, too. He was smiling and joking with his teammates throughout the celebration. That's his persona. The jokester. The guy who can always make his teammates laugh.

No one expected Behanan to be the next Siva for the program. He can't replace him.

But he can help. He could have helped.

This suspension doesn't help. Anyone. It only hurts Behanan and the program.

The last thing this Louisville group needs is another Behanan mess as it prepares to defend its national title and fight through the new American Athletic Conference a year before transitioning to the ACC.

The last thing Pitino needs is another timeout for his starting power forward.

The last thing Behanan needs is another incident that will make everyone who doubted his progress last season believe they were right the whole time.

Getting Teddy Bridgewater rattled is Central Florida's top priority this evening. Best of luck on that front. 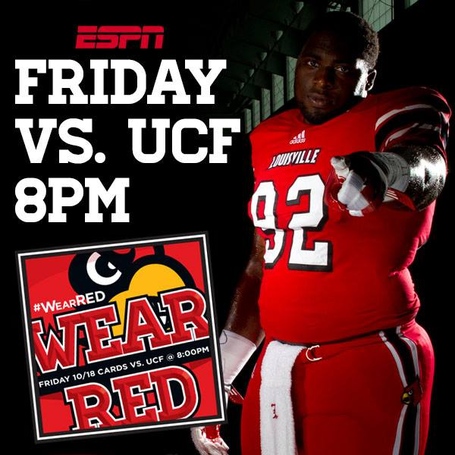 That's probably going to be your final reminder, guys.

The Sportscasts were cool, but this is the best thing Adam Lefkoe has done so far this year.

U of L target Trey Lyles is the No. 1 recruit in Canada. IN CANADA.

On the day before Louisville and Central Florida finally meet on the gridiron, Brandon Bender rears his LCPT championship-winning head. It's almost biblical.

Ok, but first I'm still waiting on that gigantic news that's going to tear down the entire U of L program, Brandon. Literally haven't done anything but stare at my computer waiting for the last three years. I'm sure it'll be blowing minds in a matter of hours though.

The AAC is loaded with talented guards. 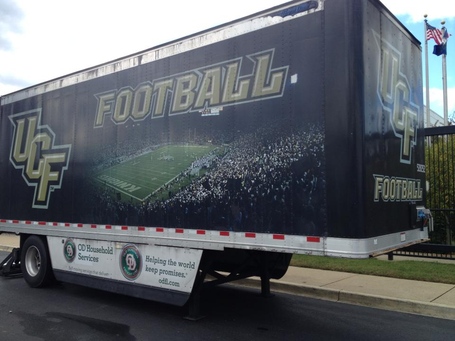 But again, another sweet bus. Way to step up your road bus game, AAC.

ESPN examines the ways U of L will try to replace Chane Behanan should he not rejoin the team.

According to Fox Sports Ohio, the joke's on you, BBN: 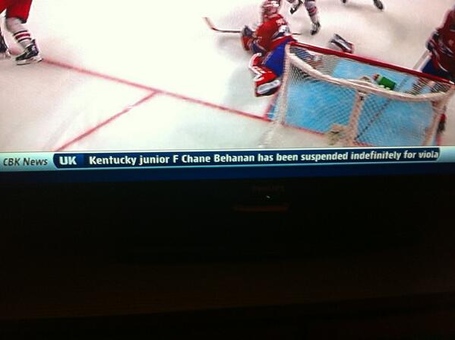 Ha Ha. Charade you are, Wildcats.

Eric Crawford offers up a thorough breakdown of the Behanan suspension.

6). It's hard to fathom, sometimes, how much some of these players are willing to risk. Behanan grew up in a desperate situation. A brother arrested on drug charges. A single mother. He grew up in a rough Cincinnati neighborhood. He learned basketball on an asphalt court, no baskets, no nets, but crates hanging on poles. When the family's home burned to the ground, his grandmother knew she couldn't handle them all, and persuaded family in Bowling Green to take him in. While he was playing his senior year of high school there, one of his close friends, Deonte Armstead, was shot and killed in a robbery. "I really don't think I'd be here today if I'd stayed in Cincinnati," Behanan told WDRB's Pat Doney in a 2012 interview. He also told Doney this, and I want you to pay attention to these words: "There were times I wanted to quit basketball, but I just know I couldn't. I think I'm the last person left in my family who can make something happen. If it ain't me, then it's nobody." Now, that's a lot of pressure for a young guy to carry around, it's true. But it also should be a lot of motivation. Apparently, it hasn't been enough.

7). In his recent book, "The One-Day Contract," Pitino talked about suspending Behanan and Kevin Ware last season. He said he told both players, "If you work hard and get back to where we know you can get, all anyone will remember is how you finished, not what happened with your suspensions." That's no less the case for Behanan now, but each time disciplinary issues crop up, they get a little bit tougher to overcome. And the decision of Pitino to remove Behanan from the rest of the team sends a signal that this is a clear break. "We'll have interaction with him. We'll keep him in shape, he'll lift weights," Pitino said. "He just won't be part of the team." One more passage from Pitino's book, on Behanan, "We're hoping Chane won't put off becoming the player he is capable of being any longer."

A very happy (day late) birthday to The Mustard. 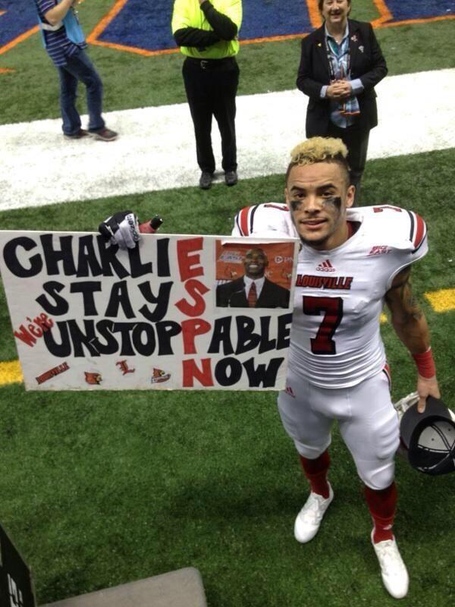 Headed To The Hotel.. Wouldn't Want To Be Anywhere Else But With My Team Heading Into This Game! #BeatUCF

That young man is good at football. He will show you tonight.

Rush the Court examines how the new hand-checking rule will affect Louisville, and Russ Smith in particular.

Spencer Hall's Alphabetical is once again a fantastically hilarious trip 'round the college football world.

Adding Miami and UNC to the conference at midseason should help our strength of schedule. 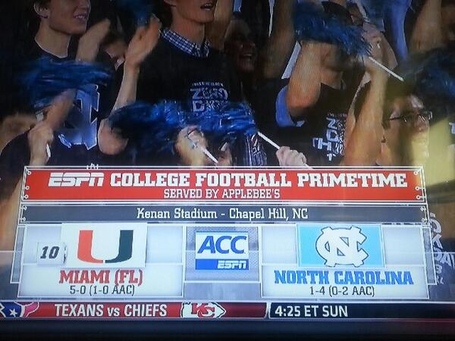 An All-American coming off each edge? I don't hate it.

Next up for the seventh-ranked men's soccer team is Connecticut, in what could be the biggest game of the season in the AAC. The Cards and Huskies will square off Saturday at 7 p.m. inside Cardinal Park in a match that will be carried live on NSCAATV.com.

Your 2013 Homecoming Court features not only Russ Smith and Luke Hancock, but Taylor Forns, the hero who brought the Senegal flag to every home basketball game for the past few years. 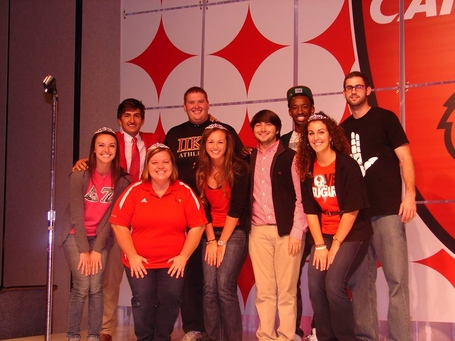 The king and queen will be crowned during halftime tonight.

Louisville and Central Florida might be the hottest rivalry in college football between two programs that have never actually met before as FBS members.

Calvin Pryor makes no bones about who he is and what he likes to do.

"I like to hit people," Pryor explained. "I'm just trying to send me a message. When I hit guys, I try to help him up, so when ‘You catch the ball again, I'm gonna be right back here again."

Hard-hitting was a constant one-word answer used to describe Pryor. He registered a team leading 14 tackles last week against Rutgers and paired it with an Interception. His performance earned him AAC Defensive Player of the Week. If Pryor continues his hot play, one that's vaulted the Cardinals Defense to the Nation's Leading score limiters, he'll be known by another name possibly as soon as next year - Professional Football Player.

"I'm not worried about any of that right now," He noted. "Right now, I'm focused on this team and winning every game. That's my main priority."

UCF fans don't think Louisville's defense is that much of a step-up from the defense of their last opponent, 1-5 Memphis.

Central Florida's defensive coordinator talks about the difficulty of preparing for Teddy Bridgewater.

Sports on Earth's Matt Brown says that context isn't everything when it comes to Louisville football.

The doubters are real. 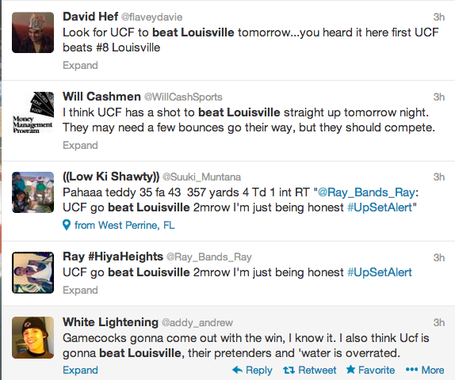