College basketball's preseason coaches' poll will be released today at noon. I would expect to see Kentucky at No. 1 and Louisville at No. 2. Just the thought of that followed by the thought of Dec. 28 gives me goosebumps.

Last year at this time, Teddy Bridgewater wasn't a household name and wasn't a Heisman candidate. What he did last year sort of thrust him into the position to do that. Is that what you guys want to do this year leading into next year?

"Yeah. I hope so. That would be nice. We're just taking it one game at a time. He had a great year last year and they got a big win in the bowl game. That kind of set the stage for them this year. They've carried on what they've been doing. We just want to win a conference. That's our goal. We've got to take it one game at a time and try to achieve that goal."

If you win the conference, you're going to a BCS bowl.

"That's right. We know that. We know what the stakes are. That's our goal. It would be exciting if that were to happen. We've got to be sharp week in and week out to be able to make that happen."

The advanced statistics from last Thursday's game reveal what we already knew: Louisville should have won by a lot more.

For those unaware, Louisville's third and final Red-White scrimmage this Saturday will be carried live on WHAS-11. The dynamic duo of Drew Deener and Adam Lefkoe will be calling the game.

Peyton Siva continued to start his NBA career off on the right note, dishing out nine assists and turning the ball over just once in Detroit's 96-81 preseason loss to the Bulls. He also chipped in four points and two steals.

Rick Bozich offers up the most important quotes from AAC media day. It includes these:

RUSS SMITH, when asked what he will title his book:

RICK PITINO, asked if he can achieve some of the same things that he achieved last season:

"The only thing that's realistic is to get another tattoo."

In news you can't make up, Sebastian Telfair signed a one-year contract to play in China on Wednesday - exactly 10 years to the day that he committed to play basketball at Louisville.

The Red Raging trend rolls on. 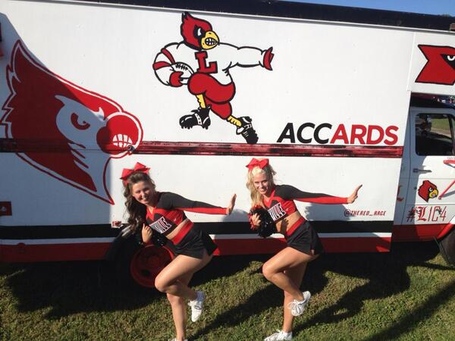 Your full television schedule for week 8 in college football.

Louisville's next game, on Oct. 26 at South Florida, has been scheduled for a noon kickoff. The game has also been tabbed as USF's Homecoming.

Speaking of Homecoming, congratulations to both Russ Smith and Luke Hancock for making the final five for Homecoming King. The winner will be announced and crowned at Friday night's game. 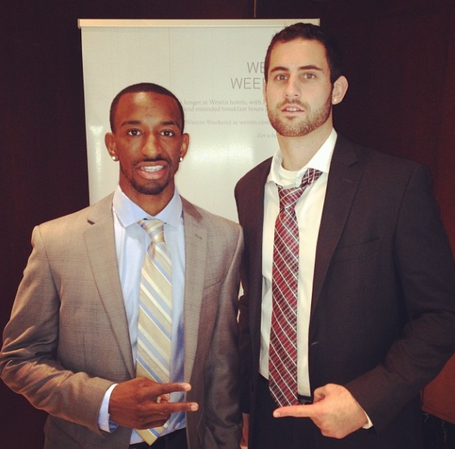 Look, Luke Hancock doesn't grind out 60-hour work weeks on the regular to button his top button when he's off the clock. He doesn't need your shit.

UCF senior defensive back Sean Maag didn't mince any words on Wednesday: "We're going up there to win."

SI's Stewart Mandel gives a level-headed explanation of why he believes Louisville is, technically, overrated.

I feel bad for Louisville. Obviously Charlie Strong and Teddy Bridgewater had no control over the fact that their conference disintegrated well after most teams' 2013 schedules were set. The Cardinals' program is a "tweener" of sorts where there's not much incentive for one of the power-conference teams Chris mentioned to schedule it. Alabama doesn't get the glamour out of a game with Louisville that it does out of a meeting with Michigan or Penn State, and Louisville is also a riskier draw. You can say that AD Tom Jurich should have put together a stronger non-conference schedule from the start to help compensate, but at the time most of those games were scheduled several years ago, the Cardinals were just trying to get back to bowl-eligibility. They weren't thinking about a national title. And no one could have predicted how the various dominoes would fall in conference realignment.

But as we move toward the playoff era, I'm a strong believer that rankings should be based less on the eye test and more on actual resumes. In College Football Overtime I cited three teams -- UCLA, Miami and Baylor -- that deserved to be rated ahead of the Cardinals. In hindsight I should not have included Baylor as one of the examples, as its schedule to date has been as light as Louisville's. But UCLA has beaten Nebraska and Utah on the road. Miami beat Florida pre-injury rash. Louisville, on the other hand, has beaten foes with the following Sagarin rankings (which includes FCS teams): No. 81 Ohio, No. 159 Eastern Kentucky, No. 86 Kentucky, No. 170 FIU, No. 143 Temple and finally, No. 53 Rutgers. In a world without preseason rankings, there is no way a team with that schedule would be ranked sixth in the country.

Now, it's entirely possible Louisville is one of the six best teams in the country. Chris is correct in saying we couldn't possibly know definitively. Since I cited Sagarin ratings before, I should note that the Cardinals check in at No. 8 themselves. In Football Outsiders' efficiency ratings, which at this point includes no preseason component and does heavily weigh schedule strength, Louisville is No. 3 (behind Alabama and Florida State). While Bridgewater gets the lion's share of attention, it's the Cardinals' defense that has been truly impressive. Led by standout pass-rushers Marcus Smith (six sacks, 10 tackles for loss) and Lorenzo Mauldin (seven sacks, nine TFLs) and great back-end play by safeties Calvin Pryor and Hakeem Smith, the Cards suffocate offenses. Ask Rutgers quarterback Gary Nova, who followed up a four-touchdown, one-interception game against SMU with a one TD-four INT nightmare at Louisville.

If Louisville continues to dominate while others fall off, I won't have as much problem with the Cardinals being ranked where they are now. But there's going to be a ceiling. Boise State dominated people, too, playing a similarly lightweight conference schedule in the WAC, but it always had that one signature non-conference win (Oregon, Virginia Tech, Georgia) to give us some sense of where it stood relative to other highly-ranked teams. The Cardinals are not going to play anyone close to that realm, with Friday night's opponent, UCF (No. 32 in Sagarin), about as high as it will get. Meanwhile there are any number of major-conference teams that will play four or five Top 25 teams, where, if they only lose once, will still be more deserving of a Top 5 ranking come season's end.

This timelapse video tour of Louisville is pretty fantastic. Although I am a little hurt that there's no footage of me sitting Indian style in front of my computer from 8-11 in the morning. You're leaving out of a huge chunk of the city's daily story, and that's really unfair.

Probably the most Kentucky (the state, not the basketball athletic program) story of all-time.

The albino squirrels on U of L's campus might be the biggest losers this week. 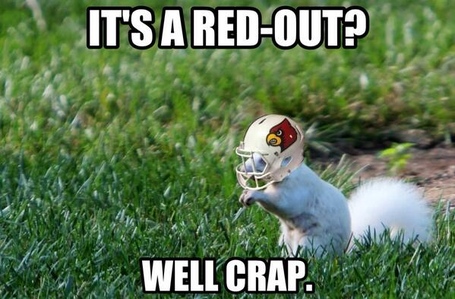 Athlon has Teddy Bridgewater at No. 8 in its latest Heisman poll. Teddy received just two fourth place votes from the 13 voters.

The powers that be at U of L are asking students to wear red today, since ESPN will be on campus shooting b-roll for Friday's game.

Wear red, get on national TV. That's a guarantee.

That's not a guarantee.

Rutgers was probably the most athletically gifted team on Louisville's schedule. UCF is probably the best team on Louisville's schedule. Quarterback Blake Bortles will play in the NFL at some point, and UCF's defense had South Carolina on the ropes on Sept. 28 until running back Mike Davis went into Beast Mode. The Cardinals didn't take advantage of their Thursday showcase last week. With no NFL game on opposite this one, it's possible Louisville will get a bigger audience this week. But will most of the people watching realize that UCF is probably a tougher opponent than the Scarlet Knights?

Finally, someone with a college football website who thinks Louisville is No. 1.

The New York Giants signed Jeremy Wright to their practice squad on Wednesday.

Also, how did "goblin" weasel its way into so many Halloween idioms? No one dresses up like a goblin, there's not even a set description for what one looks like. I feel like it just limped into this situation based on the fact that it has the same starting sound as "ghost," and quite frankly that's bullshit. Skeleton, Frankenstein and black cat have been over here busting their asses for years, and deserve pretty much all of the attention you've been soaking up for the past half century or so.

I feel very strongly about this. 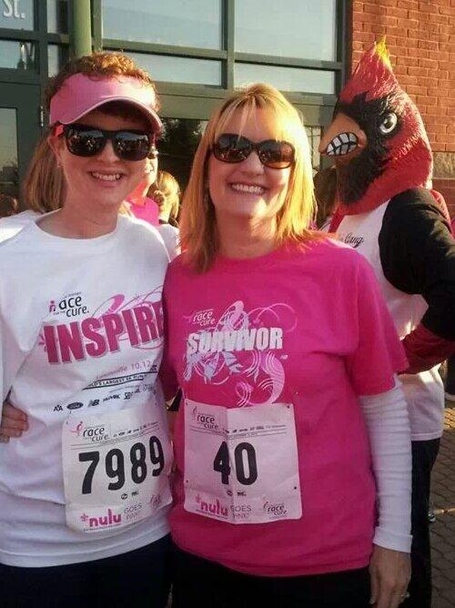 The Orlando Sentinel looks at Charlie Strong and how he's been able to lift Louisville back into the national spotlight.

DePaul was picked to finish last in the Big East on Thursday. I miss them so f---ing much.

UCF fans say that Louisville is a dump, and advise anyone making the trip to "win, shower and GTFO." Not sure what "going to Fazoli's once" has to do with anything, but they seem to be a strange breed.

Central Florida is very aware of the opportunity it has in front of it on Friday.

"It always gets us pumped up knowing this is a big opportunity for the school and the program finally getting to a BCS bowl bid being in this conference," Knights linebacker Terrance Plummer said. "The way we get there is winning the conference and Louisville is in our conference. So it's exciting. It's much-needed for the school, (and) much-needed for us as a team to measure ourselves against the best."

It's also why UCF running back Storm Johnson said no one in a Knights' jersey has needed any extra motivation this week as the Knights look to improve on their 1-25 mark against ranked opponents.

Ok, not now, but like really early tomorrow. And let's not just say we're gonna get there really early, let's actually do this. Your boss doesn't care, I talked to him. Well I'm sorry, it didn't sound like a her. I'm sure she's lovely.

While the future of the Louisville-Memphis rivalry has been stabilized, what happens between the Cardinals and their oldest rival, Cincinnati, after this season is less certain.

I think we have the support to make this happen:

Shout out to @CardChronicle for the LOVE today! Trust me brother I'm gonna have the "OVEN" Rocking Friday!! #RedOut pic.twitter.com/XnRXF4CvWp

I'm ready for an entire "It's Dark and L Is Hot" lineup of entertainment. Hashtag, DMX for assistant.

College Football News says that Louisville deserves admiration, not hatred, for what it's doing right now.

CBS' "Inside College Football" takes UCF over Louisville as its upset of the week (video).

Charlie Strong says that Midseason All-American Calvin Pryor reminds him of himself.

Someone has made Lorenzo Mauldin upset.

I would not want to be someone.