Noah Auerbach enjoys three things in life: fine art, the Card Chronicle Bird Mask, and defeating Central Florida in football. And, if he has time for a fourth, the "Friend Like Me" scene in Aladdin.

Despite his uncertain status, UCF is preparing for Friday's game as if DeVante Parker is going to play.

Central Florida is also saying that Friday night's game is "for all the marbles."

Given his weekly domination off the edge, it's becoming harder and harder to believe that Marcus Smith came to Louisville as a quarterback.

In year four of the Charlie Strong era, it certainly appears as if Louisville has a championship defense.

Heading into Friday night's game against UCF, the Cardinals are rated the No. 1 scoring defense in the nation and No. 2 in rushing defense and total defense.

"I think they have," Strong said when asked if his defense has surpassed his expectations. "Last year, we were kind of upset because we could have played a lot of better than what we did. Six games in, we played pretty good, but we can improve. You look at some of those third downs and we had eight sacks, but we let four get away from us. You look to see us do more. Even in the Temple game, we had opportunities to get our hands on the ball and get sacks."

Speaking of sacks, the Cardinals are doing that pretty well too, ranking third nationally with an average of 3.8 per game after recording a season-high eight last Thursday against Rutgers. With 23 sacks after six games, the Cardinals have surpassed the entire total from last season.

Despite something of an off game against Rutgers, Teddy Bridgewater continues to draw rave reviews from NFL scouts.

Yahoo's Louisville-UCF preview is up.

This wreath is mocking your fall wreath from across the street. 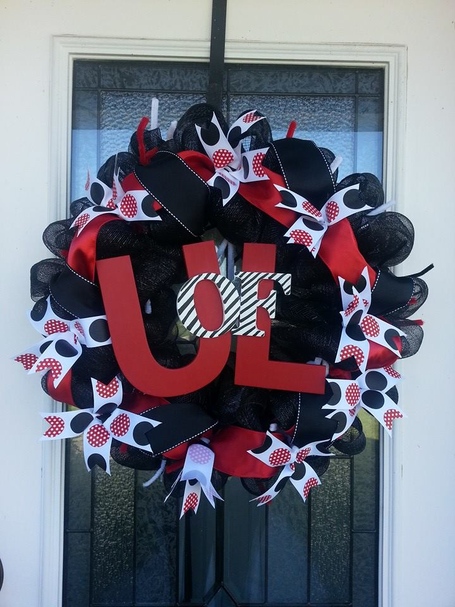 Feels like it should be pronounced "reth," doesn't it? Strange word. Strange phenomenon, really.

The seventh-ranked men's soccer team continued its month-long roll Tuesday night with a 3-0 thrashing of rival and defending national champion Indiana in Bloomington. The Cards are now 9-2-1 and haven't tasted defeat since Sept. 13.

All Ken Lolla does is reload. Watching the soccer team make its annual run in the NCAA Tournament is quickly becoming one of my favorite late November/early December traditions.

Forbes says Louisville is a "Disco Ball Team" that has no business being ranked in its "true top 10."

A Disco Ball Team TISI -1.01% looks so shiny in the right light that it makes everybody want to dance, but in normal light it's nothing but mirrors glued to Styrofoam. This year's Disco Ball Team is Louisville, which is in the Top 10 in both official polls for two reasons: 1) Louisville beat Florida in the Sugar Bowl last year and 2) Everybody loves QB Teddy Bridgewater. (No argument with the second point; if loving Teddy Bridgewater is wrong, I don't wanna be right.) But Louisville struggled at home last week against Rutgers, the Cardinals' first opponent that rose to the level of Strictly Okay. Central Florida, their opponent Friday night, might be Sneaky Good - they're 4-1, beat Penn State and lost by just three to South Carolina. Win this one, Teddy, and we'll consider your application to the True Top Ten.

For the record, the publication's "true top 10" features 5-0 Fresno State at No. 10. The same Fresno State whose best win still might be its season-opening triumph over Rutgers...which it beat by one point...in overtime...on an evening where the Scarlet Knights scored 51 points.

Your Central Florida fan of the day.

The money quotes from Charlie Strong's pre-UCF presser are money.

Miami is NOT my #1 school right now. Louisville IS my favorite & I can get quoted on that.

At the game on Friday, Thorntons will be giving away gift cards to the first 10,000 fans through the gates of Papa John's Cardinal Stadium. Gift card values start at $1, with one lucky winner taking home a $500 Gift Card redeemable at any Thorntons location.

Just another reason to arrive early.

USA Today has moved Jadeveon Clowney back to the top spot in its latest NFL mock draft (imagine that), and now has Teddy Bridgewater going No. 3 to the Tampa Bay Buccaneers.

Quick reminder that this picture exists: 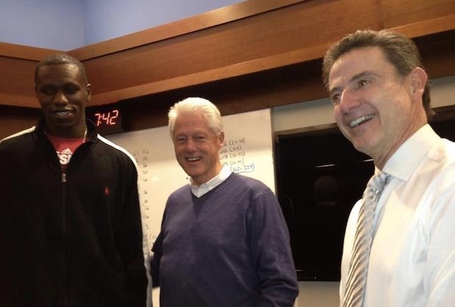 The "(insert opponent) secondary will be tested by Teddy Bridgewater" story is becoming almost as much of a weekly mainstay as the talk about Louisville's schedule. Here's the UCF edition.

This story of a Sacramento kid giving up everything to try and make it as a streetballer in New York is beautifully told.

After about a 12-hour respite, he's right back where he was.

Louisville will be called for a ton of fouls RT @Baby_Kraig: Hey @GottliebShow , what do you think about the new 'hand checking' rule?

Although it is an opinion that Larry Eustachy, who saw his Colorado State team bounced by Louisville in the round of 32 last season, seems to share.

"What are we thinking trying to put players in situations where they can be eliminated even more? We all witnessed it with Colton Iverson last year. It was a tragedy what the officiating did to him," Eustachy said. "If you pay to go see Celine Dion, she's not going to be fouled out at intermission. You pay to see Colton Iverson; you may only see four minutes of him. He may get two quick fouls and he has to sit the whole half."

"Louisville isn't going to have a team if we stick to this because they're going to all foul out in the first half, and I love the way they play," Eustachy said. "If you're going to call touch fouls, it'll be over in the first 10 minutes. (Rick) Pitino will have to play. It really is crazy."

For what it's worth, Pitino has already come out in favor of the new rule.

I never got the chance to pen an opus on the Rutgers game, but if I had, rest-assured there would have been no less than 9,000 words dedicated to the "Ruff Ryders Anthem" utilization. It needs to become a weekly standard, or at the very least a guaranteed play for big games.

Like I said earlier in the season, I was extremely hesitant about the addition of a live DJ, but Jay Kay has absolutely improved the environment inside PJCS this season.

Also, the intro was 1,000 times better last week. The towels looked really cool during it, too.

Western Kentucky's football coaches are doing whatever they can to prove that they have the most bad ass staff in the Commonwealth.

Less than 48 hours before kickoff, UCF center Joey Grant could not be more in the zone.

Have lots of respect for space after seeing the movie Gravity....intense AF, Sandra bullock is also hot AF

The schedule and rosters for the Louisville baseball "Pizza Bowl" (which is a thing) are out.

CBS' latest preseason hoops top 25 has Louisville at No. 2 behind only Kentucky.

Wichita State exacted a little bit of revenge for that whole Final Four thing by taking down the Cardinal volleyball team in five sets Tuesday night.

Grantland goes against the grain and says that Louisville will crash the national championship game...conversation.

Teddy Bridgewater is good. This isn't a news flash. The Louisville quarterback has completed 71 percent of his passes and looks poised to become a top pick in April's NFL draft.

But Bridgewater is no longer the Cardinals' lone bright spot. Now, he's sharing the spotlight with a defense that has surprised this season by allowing 3.99 yards per play, third best in the nation. The D has already helped Louisville survive a scare: Bridgewater wasn't at his best last Thursday night against Rutgers, posting his lowest QBR of 2013, but the Cardinals survived thanks to a defense that held Rutgers to 3.8 yards per play.

Adjusting for schedule to date drops Louisville's defense from no. 3 to no. 17. However, the Cardinals are about to see a dip in competition, as they face a weak American Athletic Conference slate to finish the season.

By converting yards per play into win probabilities, we see that Louisville has a 57 percent chance to go undefeated during the regular season. While a 12-0 record doesn't guarantee a spot in the BCS title game, it would certainly put the Cardinals in the conversation. Unfortunately for Bridgewater and his defensive teammates, conversation won't factor into the title-game pairing until the selection committee debuts after next season.

Howie Lindsey hits you with five things you need to know about Friday's game.