Kevin Ware Opens Up About Rumors, Fame And His Recovery

Share All sharing options for: Kevin Ware Opens Up About Rumors, Fame And His Recovery

Even with his late-season emergence as one of Louisville's most important reserves, it would have been impossible to imagine seven months ago that Kevin Ware would be the biggest draw during the Cardinal basketball team's 2013-14 media day.

That was the scene on Saturday, however, as reporters flocked to Ware to get his thoughts on the season, his recovery process and his newfound status as a national celebrity.

The other major topic of conversation was the summer rumor that Ware had been kicked off the team for a short period, a rumor Ware was as quick to dismiss as his head coach was last month.

"When I first heard it, my sister brought it to my attention," Ware said Saturday at the Cardinals' men's basketball media day. "She was like, 'You got kicked off the team?' I woke up - first thing in the morning - and had to ask, what are you talking about? All those rumors and things like that are false. I'm still here."

Ware said he wasn't on campus but at home with his family in Atlanta "because they were going through a couple of things at the time." Pitino assured Ware, who's expected to dress for U of L's season opener Nov. 9, that he would take care of it.

So how did the rumors get started?

"As far as I know, I saw it on a (University of Kentucky fan) website. That's when my sister brought it to my attention. I wouldn't say they started it for sure, but that's the only thing I can think of. Just the whole U of L-UK thing. That's as far as it goes for me."

Ware was also asked about the increase in attention he's received. It's attention that has become unwanted at times, like the instance when a stranger at the airport with a camera asked Ware about his sex life and then sent the video to TMZ.

"The attention just makes you more cautious - just saying the littlest thing," Ware said. "Even if you say something positive, someone can take that and run with it. (It's about) just having to watch yourself with everything you're doing.

"If you're out, you could just be having a good time and someone could misplace it and put words in your mouth - just being more cautious, that's what I've learned."

"I can't say it has ever really gone back to normal," Ware said Saturday at U of L's basketball media day. "I don't really go anywhere. I went to Red Lobster a couple of days ago. I was done with my meal, but it was 30 minutes before I could actually leave.

As for his recovery process, a large scar is the only thing on Ware's right leg that gives an indication of just how severe the injury he suffered was. 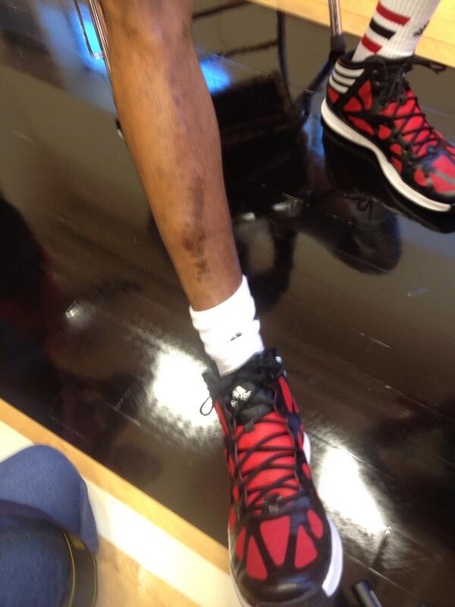 When the time comes for Sean Moth to announce Ware checking into a game for the first time this season, it might be the largest eruption the Yum Center has ever heard.