One of the most oddly disturbing things I've ever seen, and I couldn't be more supportive of it.

Apparently this number is now up to 28.

According to Rick Bozich of WDRB in Louisville, 26 scouts will be at Papa John's Stadium to watch Rutgers and Louisville play. The main attraction? Cardinals quarterback Teddy Bridgewater.

The scouts, representing 20 different teams, include Jaguars G.M. Dave Caldwell and Steelers G.M. Kevin Colbert, based on the credentials that have been issued for the game.

Big night in a number of ways.

Yahoo breaks down the major storylines and key players heading into tonight's game.

The AP adds a preview capsule.

On the Banks, SB Nation's Rutgers site, says that Thursday night is the Scarlet Knights' opportunity to make their entire 2013 season, and they believe Kyle Flood's team will do just that.

How can you even think that Rutgers has a chance against Louisville, especially after seeing the Scarlet Knights surrender miles of offense to lesser squads? Because like the fans, the players and coaches have been preparing for this game since the clock hit zero in Piscataway last year. Coach Kyle Flood or LB Jamal Merrell won't say it, but make no mistake: this is the game for Rutgers. If they are going to give one complete effort this season, this is the time, and they know it. For that reason, I have Rutgers pulling the upset, 35-34.

Flood says that if Rutgers is able to knock off Louisville, special teams will have likely played a large role.

Your quick U of L/Rutgers series history: 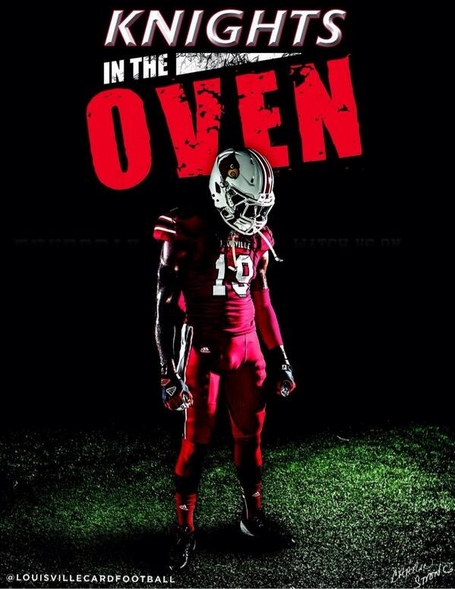 Though head coach Kyle Flood noted that a win over Louisville this year wouldn't change any of the heartbreak the Scarlet Knights suffered last season, there's no doubt that redemption is on RU's mind at least a little bit heading into tonight.

Teddy Bridgewater's Heisman Trophy campaign is ready for a relaunch.

Bridgewater and No. 8 Louisville step into the spotlight when Rutgers (4-1) visits Thursday night. The Cardinals spent the first six weeks of the season pounding patsies. That's no way to win a Heisman. A big game on a national stage against a good opponent is just what the junior quarterback needs to energize his supporters and bolster his credentials.

Bridgewater started positioning himself for a 2013 Heisman run during last year's regular-season finale at Rutgers. Playing hurt, he led the Cardinals to a come-from-behind victory that locked up a spot in the BCS.

Teddy Ballgame has been brilliant so far this season, completing 72 percent of his passes for 1,562 yards, with 16 touchdowns and one interception, but the Cardinals (5-0) have played four FBS opponents that are a combined 6-14.

According to Evan Daniels of Scout.com, Louisville offered class of 2015 center Doral Moore a scholarship Wednesday night. Moore, a 7-footer, is a four-star prospect out of Locust Grove, Ga.

A look at the biggest election showdown of our lifetime.

Aside from being four years late and counting on giving me my prize, writing the second story here is probably the worst move of Jeff Goodman's professional career. 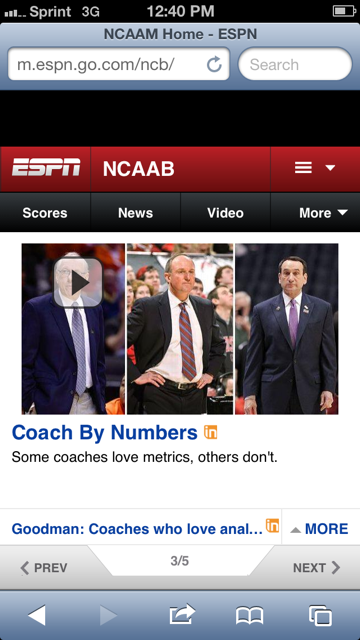 I have no desire to know about that.

DJ Jay Kay's tailgate mix for your afternoon and early evening is out.

Per usual, Mark Blankenbaker does a masterful job with his game preview over at The Crunch Zone.

I can't get over how perfect little Alex DeLarge is.

The KFC Yum Center will be hosting a 2014 regional final for the women's NCAA Tournament, which could be huge for Jeff Walz's team come late March and early April.

During his 10-minute speech about the season, Walz informed the crowd that U of L will host an NCAA Regional Tournament this season. The Cardinals will host a regional on March 29 and April 1 with the winner headed to the Final Four.

Louisville will be in the bracket that feeds into the regional semifinals and final at the KFC Yum! Center. U of L has to win two games in the tournament to play at home in the regional.

"Anytime you have the opportunity to play at home to go to the final four, that's big, big news," Walz said. "Now, we have to do our job and make it there."

Louisville knew heading into the season that it would need a host of major upsets to have a shot at playing for the national title, and it has gotten next-to-none.

Alabama football fans are like the sarcastically overzealous Beat Temple persona we adopted here last week, except they're not joking.

It's safe to say the folks in Piscataway are as fired up as we are about this evening.

Nothing else needs to be said about this game. The hype was built from the final seconds of last season's heartbreaking loss, all the way up until now. For all intents and purposes, there is one team that stands in the way of the first BCS bid in program history: Louisville. The Cardinals carry a #8 ranking into the game, and have a Heisman Trophy candidate at quarterback. The game is on a Thursday night, as it should be. It's been heartbreak two years in a row as the Scarlet Knights left the field - what awaits them (and us) this time?

Someone at the C-J (or somewhere) is picking Louisville by a final of 38-27.

SNY has a really nice preview of tonight's game.

3. Is Justin Goodwin for real?

For the third time in his career, it looks like Savon Huggins will be upstaged by a Rutgers running back. This time it is true freshman running back Justin Goodwin, whi proved to be a more formidable option in Rutgers' triple-overtime win against SMU.Goodwin ran for 149 yards and two touchdowns on 24 carries. He also caught two passes for 73 yards and a touchdown. But Huggins put up numbers like that once too. To prove he can be the feature back moving forward, Goodwin needs to do it against tougher teams, and none will be tougher in the regular season than Louisville. This will be a good look into what can be expected of Goodwin in the future.

Quote of the Week

"He's a human being. He bleeds the same way I bleed, so why should I be scared?" -Middle linebacker Steve Longa on Louisville quarterback Teddy Bridgewater

Nice to see Steve Longa taking a Shylockian mindset into the biggest game of his season.

As mentioned in the SNY preview, freshman running back Justin Goodwin's breakout performance against SMU has undoubtedly left the Cardinal coaching staff with something else to gameplan for. Goodwin will be back on center stage again tonight with starter Paul James still sidelined with a lower leg injury.

Via The Cardinal Connect, here's Charlie Strong on the SVP & Russillo Show from earlier this week:

With U of L announcing earlier in the week that it was no longer pursuing the JuCo guard, it wasn't much of a shock to see Sam Cassell Jr. commit to Connecticut on Wednesday.

A good story from NBC's Rob Dauster on Ryan Harrow and his decision to leave Kentucky.

According to Rick Pitino, his new team needs to discover the humility his national championship squad possessed.

Speaking with New York Times columnist Joe Nocera during Wednesday's Kentucky Author Forum discussion promoting his new book, "The One-Day Contract," Pitino said that his latest U of L team is talented, but not as easy to coach has his national championship team a year ago.

"They are very annoying in practice because they are constantly talking trash," Pitino said. "It drives me up the wall, it really does. I just had a nice meeting with them, and I told them that if this continues at tomorrow's practice, they will regret it for the rest of their lives. They're different."

But Pitino saved one of his most heartfelt observations for the end. During the audience question-and-answer session, he was asked about coaching Gorgui Dieng and Peyton Siva. He responded at length.

"What I have found in coaching 35 years, one moody person takes the air out of an entire basketball team," Pitino said. "That's why Peyton Siva and Gorgui Dieng were so incredible. They were never moody. If you look at Peyton's background, it staggers me the fact that he came so upbeat every day. . . . Peyton and Gorgui, and Gorgui is in this book, Eric (Crawford) and I sat him down and interviewed him. And he said something, Eric and I looked at each other, he said, 'If I'm in a room and there's only four chairs and there's six people, and one of the guys is 20 and I'm 19, I must give up my chair to the older person.' After interviewing him, we knew why he was Gorgui. Every single day in our building, Gorgui would show up, would go around to all the people working, from the custodians, the assistant coaches, me, the trainers, and just shake their hands and say good morning. Every one of them. We asked him why he did that, and he said that was his culture. When people would visit the gym, visit practice, he'd greet them, say hello to them, find out who they are, and then say goodbye to them. And so did Peyton Siva. They greeted those five people in that gym, who then tell that to 50 people, and it multiplies. They were so special. I haven't seen people like this in my career. I've had some great kids, but not like them."

Coach Pitino will be signing copies of his book before tonight's game in the "Street Fest" section outside Papa John's Cardinal Stadium from 5:30 p.m. until 7 p.m.

Quick reminder that if you own a bird mask, you have been called to action this evening.

Clifton Jones spending some time in Atlanta with Angel McCoughtry before her Dream take the court in game three of the WNBA Finals Thursday night. 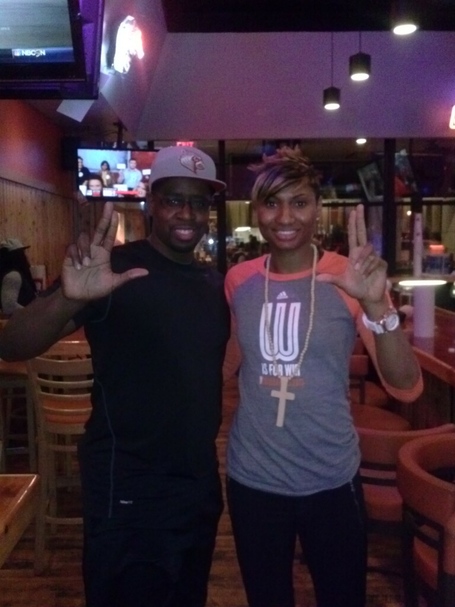 McCoughtry and the Dream are down 2-0 in the best-of-five series.

NorthJersey.com says that Rutgers has a score to settle with Louisville, while the Wall Street Journal calls tonight the game the Scarlet Knights have been waiting for all year.

And finally, a reminder that this is one of those days and nights that we spent all summer daydreaming about. Make sure you enjoy it.