That swag you sense from Cecilia Marie Miller stems from the fact that she has yet to witness a Louisville football or men's basketball defeat in her lifetime. What a feeling.

The above tidbit is 100% true. It was not manufactured or set-up for a punch line in any way.

In addition to winning the MVP award of the game itself, new U of L commit James Quick earned the "best hands" award from the folks at Rivals who were covering the event all week.

This award sounds like it's for a defender who hits, but it's really for a receiver with the best hands during the week. Quick was that guy. Not only did he hold onto the game-winning touchdown catch, but he pretty much caught everything all week in practice.

In case you missed it live, here's the video of Quick picking Louisville.

And here is speaking with ESPN.com after his MVP performance in the Army All-American Bowl.

Of all the Sugar Bowl recap articles out there, I believe this is my favorite.

A belated thank you to Chris Link and Ryan Settles on the best Christmas gift I had ever received or ever would receive (Ralphie). 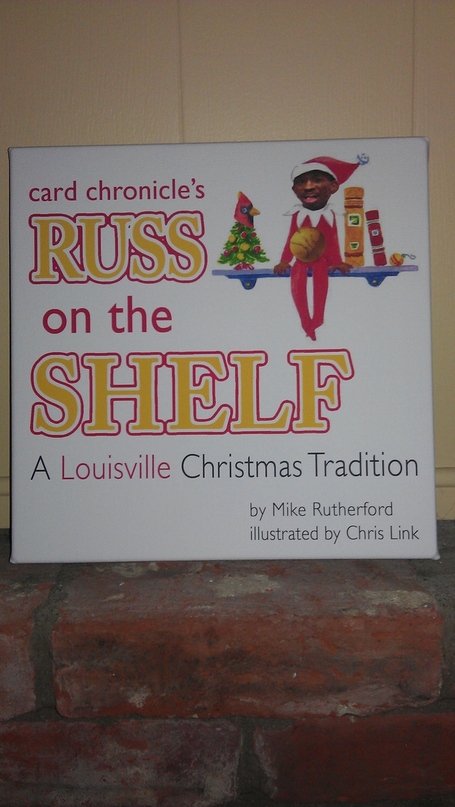 That will be on my mantle in December when I'm 80.

Like college coaches, fans, opposing players, I dismissed him and his outlandishly high-scoring performances at Archbishop Molloy.

I felt he was making a mistake by going to prep school, that he should pick whatever mid-major would have him.

Was I ever wrong.

These days, Smith is a national phenomenon, the leading scorer for No. 4 Louisville and legendary coach Rick Pitino, as I detailed in today's Post. The skinny kid from Greenpoint has a shot at the NBA.

It's still hard to believe that last sentence. I've covered NBA players at the high school level -- such as Kemba Walker, Lance Stephenson and Devin Ebanks -- and watching them you knew there was something special. I never felt that way with Smith, though there was plenty unique about the jovial, always smiling kid with no conscience when it came to shot selection.

Florida quarterback Jacoby Brissett is transferring, and he has Louisville on his short list. Brissett will have two years of eligibility remaining beginning in 2014.

A good story on Rick Pitino and Doug O'Neill currently leading the way on the Kentucky Derby trail.

Shoutout to Will Allison, who was called out by ESPN The Magazine's Twitter account for his Sugar Bowl prediction. 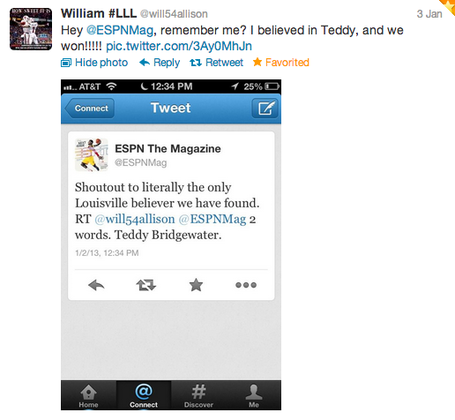 Former Card Samardo Samuels was waived by the Cavaliers on Sunday, but has reportedly already drawn interest from the Nets and Thunder.

The CC Bird Mask putting in some face time with President Ramsey. 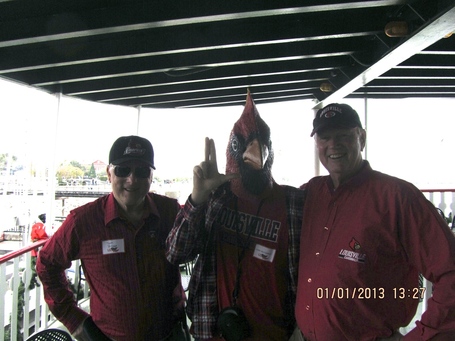 Though Russdiculous may have disappointed through three starts, another one of Pitino's horses, Goldencents, currently leads the Road to the Kentucky Derby standings.

Also, Siva (the horse) will be making his debut on Jan. 10 in the 7th race at Gulfstream Park. Post time is scheduled for 3:45 p.m.

According to his Twitter account, five-star 2014 forward Jalen Lindsey will be visiting Louisville again on Jan. 19 when the Cards host Syracuse. Lindsey was in attendance for U of L's game against Providence on Jan. 2.

No one taught the women's basketball team about DePaul Day.

Rep. John Yarmuth showed his pride on Capiton Hill on the day after the Sugar Bowl victory. 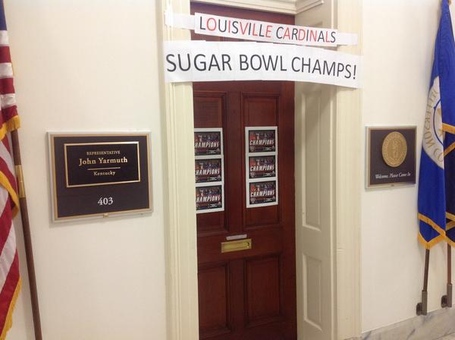 The first RPI ratings of the season are out and Louisville checks in at No. 9.

Interesting story from a few days ago about Josh Pastner saying he has no interest in continuing Memphis' series with Tennessee because Louisville is the Tigers' true rival.

"Over time I've evolved as a head coach on that," Pastner said Monday. "My thing (in playing Tennessee) is, I don't want to be locked into something that we don't have to be locked into. I'd rather have way more flexibility (in scheduling) and (play) different teams and this and that - as long as the one team on the schedule every year is Louisville."

According to Pastner, Louisville has essentially replaced Tennessee as the long-term rival on the Memphis schedule. They've met the past two seasons with Louisville winning each. The Tigers will face the Cardinals as Big East Conference mates next year and continue the rivalry as a traditional home-and-home series from 2014-15 onward after Louisville moves to the ACC.

"I think Tennessee is a very good basketball program, I have great respect for them and I think it's a high-level game, but I don't look at playing Tennessee any differently than playing Gonzaga or Xavier or Florida or Texas or UCLA," Pastner said. "Those are national games. The rival game for our fan base, our city, is Louisville, not Tennessee."

And finally, our friend Bob Valvano has made national news for this rant in which he rips the ESPN talking heads for their coverage of the Sugar Bowl. It's worth a listen if you have the time.