Reality Check: So, How Good Are We Going To Be Really?

A very early look at who we are losing, who we have coming back and the shape of our 2013 Cardinal Football team.

Share All sharing options for: Reality Check: So, How Good Are We Going To Be Really?

So, James Quick has committed to the Cardinals, which guarantees us a BCS berth and an outside shot at a national title, right? NOT SO FAST, MY FRIEND. 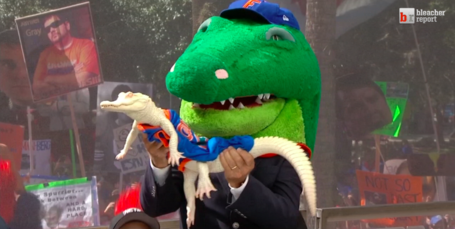 That gator was uninterested in pigmentation via www.thesportslion.com

Quick is obviously a tremendous talent, but he joins the deepest group on the team, a wide receiving corps that returns everyone but Andrell Smith and Scott Radcliff, and gains a hopefully full strength Michalee Harris. And possibly Charles Gaines although who knows. And Robert Clark and Matt Milton. And TE Gerald Christian. So his impact could be immediate, but we won't be counting on him to win games for us on his own.

So how good are we really going to be? I think pretty darn good, but there are a coupe of areas for concern.

The Good News? The entire starting 7 and everyone on the two deep except for Daniel Brown returns. Yup, even Roy Philon and George Durant, both of whom I would have sworn were seniors. Marcus Smith and Lorenzo Mauldin, Jamaine Brooks and Brandon Dunn, Preston Brown, Keith Brown, James Burgess, Jr., Deontriez Mount. Sheldon Rankins and Deangelo Brown, both true freshman DTs. All of those guys are back. And the way they played against Florida, and another offseason in the strength and conditioning program (especially the true freshman)......well, there's a lot to like there.

The Bad News? This is the same front 7 that had a whale of a time stopping all the spread offenses we saw all year, that produced very few turnovers and even fewer sacks, and barely got pressure on QBs all season.

Out With The Old: Loses just Daniel Brown, which is crazy.

In With The New: As of this writing, we have 4 defensive line commits including highly rated De'Asian Richardson and Derrick Calloway and early enrollee Finesse Middleton. Add Jason Hatcher to this group and there are 5 guys who could see time, although obviously the best thing for the long-term is to red shirt at least some of them and see if we can get through without many injuries to the linemen. We'll need a DE to play right away probably, especially one who can create havoc on his own, to back up Maulden, Mount and Marcus Smith. This will be one of the most interesting things to watch: whose names are where on the defensive line on Depth Chart Sunday. There are currently no LBs who are on our commit list.

In terms of RS Freshman, the only guys who may see time are DT Pedro Sibiea and LB Nick Dawson, who was a huge recruit with a lot of expectations obviously. He should back up Preston Brown and take over as the anchor of the defense in 2014 after Brown graduates.

Outlook: This group should be better than last year, if the last few games of the season are any indication. Freshman defensive linemen rarely make a huge impact, especially early in the season. Even Jadaveon Clowney was not dominant from the getgo last year and that guy is obviously a freak. So assume for expectation purposes that our DL depth chart looks roughly the same as it did against Florida. We need them to play roughly the same to have the kind of year we want to have.

In terms of the LBs, the jump from true freshman to true sophomore year is usually very big, so Keith Brown and James Burgess should be even bigger again next year. Throw in Dawson and a healthy Ty Dixon and George Durant and the LBs should be better as a group than this season.

The Good News: Calvin F'in Pryor, Hakeem Smith, Andrew Johnson and Terrell Floyd all made huge plays against Florida and all come back to do it again. Jermaine Reve had a solid RS Frosh season.

The Bad News: Adrian Bushell is gone, and if you know what is up with Gerod Holliman, please leave details in the comments. After the starters we are really, really thin. Unless someone like Kamal Hogan is ready to play significant minutes, we have 3 safeties with real, actual quality game experience and 3 CBs, and that's it.

Out With The Old: Adrian Bushell is the only guy to leave, and in fact was the only senior listed as a starter and only 1 of 2 seniors listed on defensive depth chart whatsoever for the Florida game. Crazy.

In With The New: We will add two redshirted freshman to the CB corps: Devontre Parnell and Kevin Houchins. Both guys are decent recruits and hopefully can play well from day 1. Also, with the WR depth, don't be surprised to see Charles Gaines move back over assuming he comes back. And if Holliman is still on the team and plays next season, that would be a huge, huge, huge addition. Richard Benjamin, an incoming true frosh, could see time right away.

Outlook: Entirely depends on health and conditioning and at least one of the newcomers being good enough. The top 4 starters are playmakers, and throw in Reve in a 5-DB look and we will have 5 guys with significant experience lining up for us. But we better hope that all 5 can play a lot of snaps, because the dropoff could be scary. This unit worries me the second most of any.

Unit That Worries Me The Most: Offensive Line

The Good News: The game is won in the trenches, and we return 60% of the trenches from this season, and these guys are big: John Miller, Jake Miller and Jamon Brown are all above 300 pounds (Brown was listed as a svelte 340 pounds on the Sugar Bowl depth chart) and all played well this season. Also returning are Nacho Garcia, who is a comically large 6-5, 345 lbs, and will play LT, and Ryan Mack, 6'5", 305 LBs.

The Bad News: We lose two of our best, including our anchor and Twitter hero, C Mario Benavides. He, along with LT Alex Kupper, play the two most important positions on the line. From a leadership standpoint, it will be extremely, extremely hard to replace either one. While Nacho may look the part, Alex Kupper's stats didn't fully illustrate his importance to our team. And the group this year, especially the last few games, had trouble sustaining a running game, although I will chalk part of that up to play calling and Perry going down.

Out With The Old: Mario and Kupper, we will miss you.

In With The New: ANVOOTS! He, along with Joe Manley, were both big time OL recruits who were redshirted and could see time in the 2-deep. We also have 2 recruits but they will likely redshirt as well.

I want to talk to you, Mike Romano. Look, you were a redshirt freshman this year and didn't play much, I get that. You weren't highly ranked out of high school, and most fans have probably never heard of you. You are following 8 spectacular years of Centers: 4 years of Eric Wood and 4 years of Mario. And not only were both guys the emotional center of the team, they also could tweet the hell out of twitter. You have huge, huge shoes to fill in arguably the most important position on the team not manned by Teddy Bridgewater. Oh ya, and you have to protect that same Teddy Bridgewater. No pressure, but, ya, pressure.

Okay, everyone else can pay attention again: there was buzz about Romano after fall camp and since Teddy is such an important part of the protection audibles, Romano should be able to ease into the role. Although, if this season is any indication, he is way, way behind Mario and Wood on Twitter.

The Outlook: Again, on paper we will have the biggest starting offensive line we've ever had: Nacho and Jamon Brown are behemoths and Miller and Smith are both at 315 or so. If Romano can gain a couple pounds, all 5 guys will be above 300 pounds, and only Romano among them will not have played meaningful snaps. And Smith, Miller and Brown have all played a lot for being just true juniors in 2013. This is still the biggest concern, but the talent and size are there. Just need to gel in the off season and protect Teddy.

We return so, so many guys that as long as everyone improves or at least doesn't regress, we are going to be really, really good. Teddy and the WRs, along with 5 different guys who can carry the ball, make our skill position players one of the deepest and most talented groups in the country. Honestly, our WRs are probably the best in the country, and Teddy is obviously one of the best 2 or 3 QBs, depending on how you measure it.

We'll just need 2 more guys in the secondary to step up, the starting offensive line to gel and the front 7 to stay healthy and keep improving. Not too much to ask for, is it? Not unreasonable to believe those things are going to happen, right?