Thomas Burnside holding it down for the Cards at Cherry Creek Falls in Seattle. Pretty sure I have that same hoodie. Not 100%.

Louisville's tornado sirens work. That much has been established.

The Cards tumble all the way down to No. 14 in Luke Winn's latest power rankings.

The fact Smith scores 1.212 PPP in these situations is part of what makes him so valuable; UCLA's Shabazz Muhammad, who might be the first pick in June's draft, is a frequent transition scorer but only does it a rate of 1.011 PPP.

Phil Steele projects that the Louisville football team will begin next season ranked No. 10 (Insider) in the preseason AP Top 25.

So this speaks pretty loudly.

I'm linking this latest conference realignment story, but that doesn't mean I have to talk about it.

Best wishes to friend of the site Breno Giacomini, who underwent elbow surgery on Tuesday. Breno played through the injury during the Seahawks' playoff run.

We heard a lot about U of L punter/kicker Joshua Appleby's athleticism when he signed with the Cards last year, but this picture (from Hunter Bowles on Twitter) speaks louder than any words could. 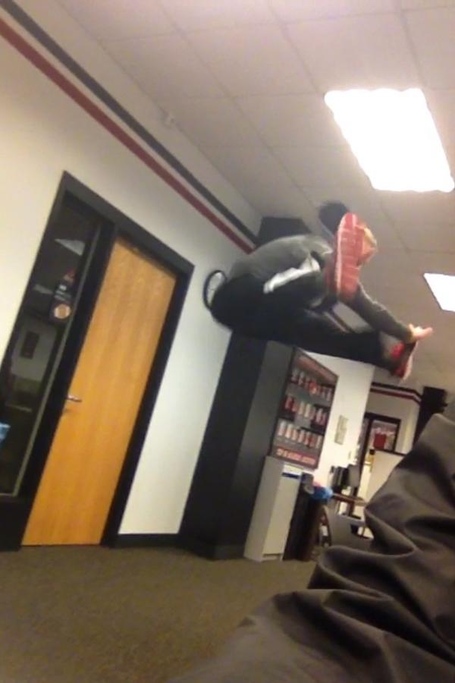 Louisville has a seat at the ACC table for the first time this week as the league's athletic directors, senior staff members and faculty advisers meet to discuss a broad range of topics.

This has been labeled as more of a blue-sky type of meeting that is expected to cover a wide range of topics and focus on the future of the league and its identity with the new members and Notre Dame. There are three main topics that will be discussed, though:

--Future scheduling, bowl tie-ins and the future of the postseason
--Television contracts
--NCAA legislation topics that came out of the NCAA convention earlier this month in Grapevine, Texas. Two of the main topics were trying to simplify rules, and changing the recruiting climate.

The C-J has a quick story on the cool collage Sugar Bowl posters that were up for grabs in our most recent contest. You can purchase them here.

U of L junior guard and Christian Academy product Anita Slaughter has been named to the Big East's weekly honor roll. 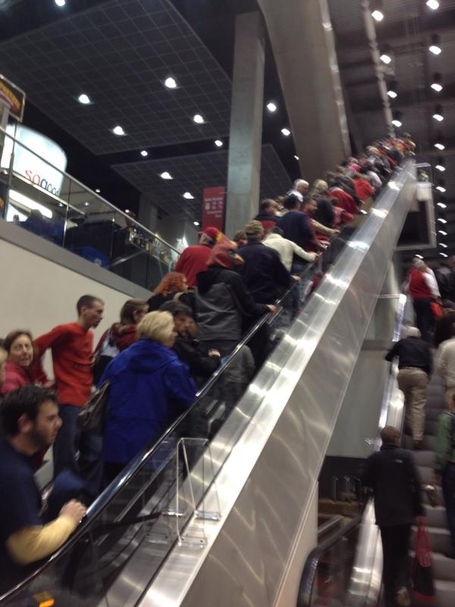 In a bizarre story, former Indiana basketball player Devan Dumes is being charged with attempted murder and attempted carjacking.

The President just wants some answers.

So a dude can't watch lifetime?

Louisville 61, vs. Marquette 55: If the season ended today, Marquette's Buzz Williams would be the favorite to win Big East Coach of the Year. The Golden Eagles' only conference loss is an overtime defeat at Cincinnati. Saturday's tilt with the Cardinals at the KFC Yum! Center, however, will be too much for Marquette to overcome.