Share All sharing options for: Louisville Stuns Florida To Win The 2013 Sugar Bowl

I don't even know where to begin.

I suppose I could begin by saying that Louisville's win over Florida is the biggest upset in the history of the BCS in terms of both point spread and the disparity between the rankings of the two teams involved.

I suppose I could begin by talking about Teddy Bridgewater and how, despite taking an unbelievably vicious shot on the first play of the game, he hung in there and proved on the biggest of stages that he was the best player on the field.

I suppose I could begin by talking about Charlie Strong, Shawn Watson and the rest of the coaching staff, who devised a brilliant game plan to help pull off the biggest win in the history of the Louisville football. 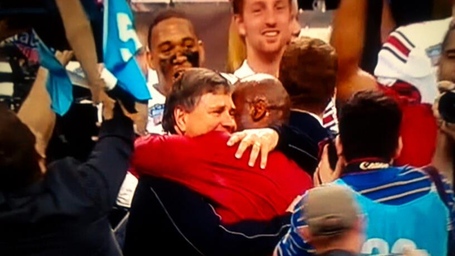 And I suppose I could begin by talking about the fans, who responded to criticism last month by almost making the Sugar Bowl feel like a home game for U of L, an edge the heavy underdogs desperately needed.

When it comes down to it, however, this was a night where everyone deserved the lede. This is arguably the most special night in the history of Louisville football, and it belongs to everyone involved equally. I hope you're celebrating accordingly.

The Louisville Cardinals are the 2013 Sugar Bowl champions. Get on board or get out of the way.