Cards Remain In Top 15 Of Both Major Polls

Share All sharing options for: Cards Remain In Top 15 Of Both Major Polls

Despite becoming the first team since 1989 to begin a three-game losing streak while ranked No. 1, Louisville managed to remain in the top 15 of both the Associated Press top 25 and USA Today coaches' poll for this week.

The Cardinals' relatively mild slide results in them residing at No. 12 in the AP poll and No. 13 in the coaches' poll. Both are season lows for Louisville, which has been in the top 10 since the preseason.

Despite being a commanding No. 1 choice in the AP poll, Michigan amazingly finds itself behind Kansas in the coaches' poll. The Wolverines earned 53 of the possible 65 first-place votes from the AP, but received just 14 from the coaches, two less than the Jayhawks.

Here are your full rankings for this week: 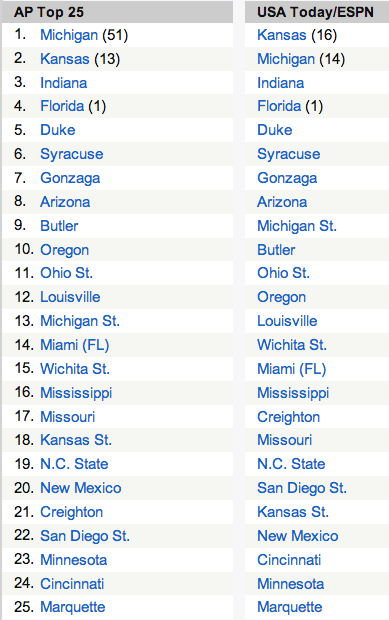