Share All sharing options for: Fooled By Randomness: Pizza Consumption and Field Goals

I love pizza. Pepperoni is my favorite, although I'll mix it up if the situation calls for it. Tony Boombozz is my favorite pizzeria, with Domino's (ultimate deep dish) and Papa Johns also in the rotation. The Pub at 4th Street Live had a good pizza until it randomly closed its doors a few months ago. Tostino's Pizza Rolls, Bagel Bites: also good. I went through a stretch last year where I was constantly craving and eating pepperoni pizza and ate it multiple times per week, but for the most part, pizza consumption has been above average but pretty regular.

Had a couple of unlucky things happen: heard about an unsanitary slice at Spinelli's downtown and then got sick after eating (not that it was caused by, just unlucky temporal connection) a bunch of pizza rolls. And as a result, I haven't touched a pizza in months. Longest stretch of my life without eating pizza. If you hacked into my mint.com account and looked through the last few months, you would think I have never eaten pizza, and reasonably conclude that I will not eat pizza over the next few months. But, here's the thing: I still love pepperoni pizza.

That brings me to the last 3 Louisville losses, and tonight's game. Let's play the "Player A" "Player B" game:

Okay, that's probably obvious: Player A is Peyton Siva's last 3 games (15 and 13 against Nova), and Player B is Siva against UK, Providence and USF. All 6 games of those games happened in the last 30 days.

There are some good reasons for those differences: Syracuse, Nova and Georgetown all play defensive styles that frustrate and neutralize Siva's best advantage. The bad news: Pitt comes to town and will throw the same style at Louisville. The good news: after this we have a good stretch of games against teams who don't seek to win a game in the 50s, except at Notre Dame.

I sound like a broken record, but these last two weeks have shredded any deep down wistfulness and regret I had about the Big East basketball conference coming to an end. While the Syracuse game was pretty awesome in stretches, the style of play of that game, followed by Nova's constant-assault defense and Georgetown's aggressive defense (which, as an alum, I can tell you loses its effectiveness right around March 1), and the officiating of all three...followed by the awful, awful, awful style of play that Pittsburgh will show us tonight. I mean, it's no fun to watch, it can't be fun to play, and it also frustrates what we try to do on offense.

Another thing about Siva: Russ has had his 2 of worst games of the season against Nova and Georgetown, and they have not been on the court as much as they had been all season up to now. Something is Clearly Wrong, but nothing that winning can't cure.

Last year's Pitt game at the Yum!, I swear I almost got up and left halfway through the second half. Nothing about us, but the way the game was being played (Pitt invented the "center hedge and body check the point guard to defend the high pick and roll" play), officiated, everything was just not fun. 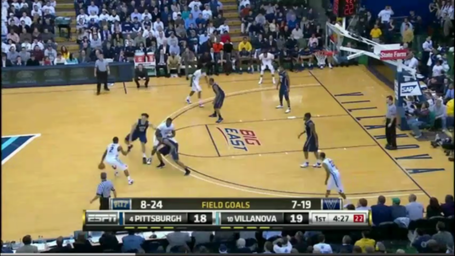 I hated having to watch it, and I felt awful for the players having to play in it. So after losing 3 in a row, to have Pitt coming in really fills me with dread. I personally blame Jamie Dixon for the Big East style that is designed to slow games down, prevent anyone from getting into the lane, and make the other team tear their hair out.

We could easily lose this game. Like the last 3 games, we are the better team (I still think we are better than Syracuse) and will ultimately have a more successful season than Pitt. Sure, they crushed Georgetown 73-45 and beat Nova 58-43. They also gave Michigan a great game, ultimately falling by 5. KenPom has them ranked 6th, with their offense being their strong suit. But they are not better than us, and if we shoot a reasonable percentage and the players gain a little confidence, we should win.

Regardless, let's look ahead: after Pitt we host Marquette on Super Bowl Sunday (we do better against them in Louisville and New York than on the road), go to Rutgers and then Notre Dame, host St. John's, go to South Florida, host Seton Hall, DePaul Day @DePaul, and then a very tough stretch to end the season: at Cuse, Cinci and Notre Dame at home. In terms of styles, after tonight, the styles we are playing against get much, much easier until those last 3. And by then, hopefully, we will be in late February form. Or, the same form we were in during December.

We're going to be fine. Tonight's outcome matters (see: Carver to Herc, Season 5: it all matters) but like last year, I don't know how much it says about March. I don't think another loss will cause the season to fall apart, although it feels like we are on the brink. I just don't think our team or coaching staff is built like that, and there are a ton of games left.

We don't even need to get hot. We just need to shoot average from the field. Just average. And not play against teams whose only goal on defense is to put 5 all guys in the lane and two guys on the ball. Sure, they leave guys wide open for 3, but we've been missing. Or they foul the crap out of the guy with the ball, and then watch him miss both free throws. That's basically what has happened the last 3 games, and if you only looked at those 3 games, you would assume that we've never made shots, never won a game, and will never make shots or win a game again. Luckily, that's not how it works.

At some point, we will get our pepperoni pizza again.