Father Russ is never out of season.

The NCAA announced on Wednesday that it will be investigating potentially improper conduct that occurred during its own investigation of the University of Miami athletic program.

According to the NCAA's release, former enforcement staff members worked with the criminal defense attorney for former Miami booster Nevin Shapiro to improperly obtain information for the purposes of the NCAA investigation through a bankruptcy proceeding that did not involve the NCAA.

Additionally, NCAA president Mark Emmert said during a teleconference on Wednesday that the NCAA may have actually had Shapiro's attorney on its payroll without anyone knowing about it. He also dropped the bomb that former NCAA investigators worked with Shapiro's attorney to improperly subpeona and depose witnesses.

It was reported by multiple media outlets that U of L football assistant Clint Hurtt was expected to receive a Notice of Allegations from the NCAA sometime in the very near future. Now, with the NCAA beginning an investigation into potential unethical conduct that took place during its own investigation into potential unethical conduct (it's like the shittiest possible sequel to Inception), that Notice of Allegations is unlikely to come anytime (relatively) soon.

There's still not enough known to make any substantive comment at this point, but it seems like the odds of Hurtt keeping his job at U of L are at least a little bit better than they were 24 hours ago.

Tom Jurich held a press conference earlier today to discuss Charlie Strong's new contract, but he did also make mention of Hurtt and the situation at Miami. Here's what he had to say:

"That is a deal between Clint and the University of Miami. This is something they need to deal with. I don't believe any allegations have even been made to him not to my knowledge at least, and when they do, he'll get his due process and get his chance to speak and he'll deal with that. We'll wait for the final outcome, and we'll make our decision. We're very strong in the compliance area, and we want to continue to be that way."

Somehow, Kentucky fans read that and saw that Louisville is going on probation, Teddy Bridgewater was recruited illegally and the Sugar Bowl trophy is being taken away. Their minds work differently.

The most remarkable aspect of Louisville's loss to Villanova last night was that the Cards turned the Wildcats over 18 times.

Monique Reid's late lay-up lifted the 13th-ranked Louisville women to a 53-51 win over Marquette. The game wouldn't have been nearly as close had the Cards not bricked half of their 18 free-throw attempts. Combined, the U of L men's and women's teams went 21 of 42 from the charity stripe. That's horrendous.

A really interesting piece from CBS in which anonymous coaches that have played Louisville this season talk about the Cards' strengths and weaknesses and the best way to beat them.

"Taking care of the ball. They press, with all that athleticism and speed. We wanted to execute our offense against their pressure defense. We emphasized ball screens. You can't do it on your own."

"Turning it over and maintaining your composure. If you give them the ball, they can really get out and get easy transition baskets -- and that also allows them to press. Then they can really break your spirit and rattle you -- and that's what they want."

"Just being strong with the ball. Not turning it over. If you're turning it over, turn it over out of aggression, not out of being soft. They're very good offensively, and you can spend all day going over how to guard them. But you have to put pressure on them."

If Louisville does ever get an NBA team, here are four proposed logos.

I don't care if they're calling the team the Colonels, I think you gotta work the bird mask in there somehow.

Speaking of the bird mask, there was a CCBM spotting courtside last night in Philadelphia. 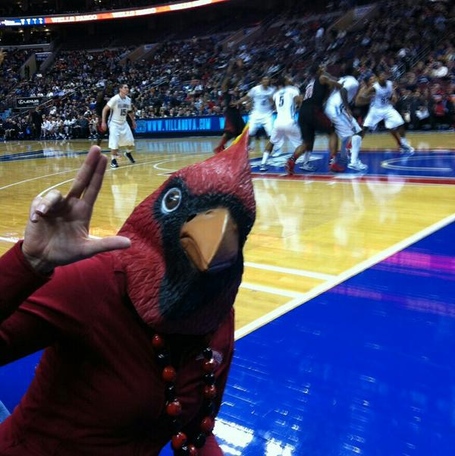 So we've now had documented Card Chronicle Bird Mask appearances at all three Big East road games so far this season. Again, all of you are heroes.

Seriously, how hot is this new Swift song?

Jurich also spoke a little bit today about the decisions by Boise State and San Diego State to back out of their moves to the Big East, and what that means for Louisville's 2013 football schedule.

"That was a blow to us, no question about it. We lost 20 wins in less than a couple weeks," U of L athletic director Tom Jurich said. "San Diego State, I was really looking forward to having them come in here. They were a nine-win team coming off a bowl game, and certainly going out to Boise and playing an 11-win team, (no longer doing that) is tough.

"I know the league is doing everything they possibly could. ... They've been put in a very difficult situation, and I think they are doing everything in their power to make it very workable. We have a schedule, and that's a start."

Asked whether U of L is being considered for participation in a marquee, made-for-TV non-conference game, Jurich said, "Anything you're hearing is probably rumors."

Anything less than a Louisville/'Bama Labor Day showdown on the moon will disappoint me. I don't think that's asking too much. I'm a season-ticket holder. I wear red to the games. I do my part.

It's a huge day for the Team Chipotle contingent in the city of Louisville. I celebrated with a concentrated left fist pump in bed. I swear to you that I intended absolutely no innuendo when I typed that previous sentence, but it just made me laugh so now I'm leaving it in there.

Jeff Walz would very much like to see you inside the Yum Center on Sunday. 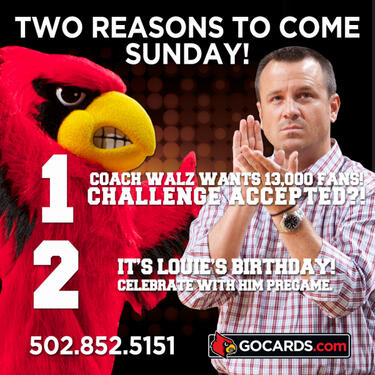 If you can get a bird mask picture with the Dali Lama, I can pretty much guarantee that you're going to appear on this site.

Luke Winn's latest power rankings for Sports Illustrated drop the Cards all the way down to No. 9.

With the Cardinals in a cold-shooting nosedive, the conventional wisdom would be to talk about their shooting problems ... but the reality is that their season-wide improvement in spot-up shooting is the main reason their offense has gone from 103rd in adjusted efficiency to 16th. The chart below lists Louisville's points per possession (per Synergy) in its most-frequent offensive situations, up to but not including the Villanova loss; you'll see that everything but spot-up shooting has stayed pretty much the same:

And the two main gainers in spot-up shooting have been their starting guards, especially Peyton Siva:

Kansas checks in at No. 1 this week, followed by Duke and Syracuse.

AOL Mail is down as I type this, which means myself, Eric Wood, Ray Lewis and a lot of people who died in the '90s are currently unreachable by email. Feel free to hit me on my beeper if it's important.

And finally, this is probably the best halfcourt shot ever.