Correlation, Causation, Cuse, Mentioning 7 At A Craps Table, and Villanova as Harbinger

The Syracuse loss told us some things about our team, but weirdly, the Villanova result seems to matter more to how far we go in March.

Share All sharing options for: Correlation, Causation, Cuse, Mentioning 7 At A Craps Table, and Villanova as Harbinger

I promised myself that this wouldn't just be a big Syracuse rehash, but in trying to gather my thoughts about tonight's game, both last Saturday's game and all of Cardinal basketball history have to be worked through as we move forward with the rest of our Big East schedule and lives.

Look, I've been leading the "we are really good" train this season, throwing karmic caution to the wind, and while I didn't think we were going to win out, a loss like Saturday counts as new information that has to be factored in. So after a couple days of stewing, here are my thoughts. 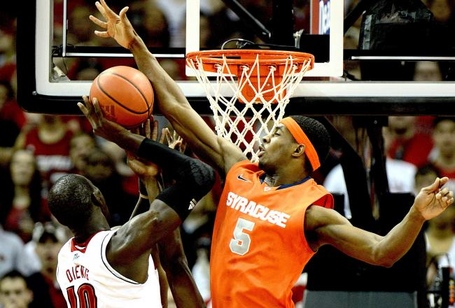 First, Friday afternoon a long twitter conversation broke out between hothot, @doctorsofdunk and some others about this year's team and the Morehead State game, which, it turns out, was like Minnie Driver trying to approach Phillip Seymour Hoffman at the craps table in Owning Mahowny. hothot bringing up Morehead did not cause us to lose, obviously, but it's like saying 7 while someone is on a hot roll: it doesn't actually affect the outcome, but everyone would just prefer you didn't do it.

Because there were a lot of similarities between the Morehead loss and Syracuse loss: an opposing player shooting out of his mind from 3, questionable calls (Faried was NOT fouled by TJ when he made those 2 FTs late, he DID foul Marra), bad luck, cold shooting when it mattered....and not since Morehead have I really been affected by a loss as much as I was Saturday. That's totally irrational because it is January and that was the NCAA tournament. But I think the reason why is that it showed that this team absolutely can lose a game it should win, and in a single-elimination tournament, with a team and a season that represent our best shot at a championship...it just shouldn't end like 2011, and it shouldn't end with a game like Saturday.

Rationally, though, here's what had to happen for us to lose:

1) A Syracuse player shot 4-4 from 3 and 7-7 from the field for 18 points in the first half, including a layup when Gorgui blocked the guy trying to gorilla dunk over him, the ball fell right into his hands and why was he even under the basket in the first place?

2) Our team shot 4-20 over the final stretch of the game, and our 2nd half shot chart documented that many of the misses came in the lane. (I just threw up in my mouth). One or two of those go in, and we are celebrating our huge, gutty win and buying tickets to Atlanta and sending Goodman more "Are you not entertained?!" tweets.

3) Not one, but TWO completely terrible, game-changing calls going against us. The refs were terrible, and setting aside the different standards for what constituted fouls against our interior players and their interior players and whenever Wayne Blackshear was involved (another gambling metaphor: Wayne loses EVERY coin flip call. charge/block, jump ball, out of bounds, contested shots - any judgment/50/50 call it seems like Wayne loses and then hangs his head because poor Wayne), where was I?

Oh ya, assume literally EVERY other call the refs made was correct, between the out of bounds off Cuse call that was missed - which led to Triche hitting his only 3 of the 2nd half on that possession, and hundreds of people swearing his foot was on the line, and we were up 3 when Triche hit his 3 to tie it, and then a few moments later, MCW's biggest push off of the game (he pushed off all game) and they call Russ for a block, and that should have been MCW's 4th foul....I mean, between those two calls, if even 1 of those 2 goes the right way, it is a completely different outcome. Argh.

4) Gorgui and Siva combined for 7 points. Chane had a below average game on offense and Syracuse's length inside clearly gave him fits (Montrez scored at will inside in the first half, only took 1 shot in the second half). So that's 3 of our starters and most consistent and best players, all having a below-average game.

5) Our senior point guard throws it away and the guy for the other team makes a crazy diffucult dunk. Then our open bunny is missed and somehow in the scramble our guy gets called for a foul. And then our center gets the ball open down low with a chance to tie and doesn't even get a shot off. All of those things happened in the last minute, and those are 3 highly unusual occurrences, especially ALL of them happening within a minute. 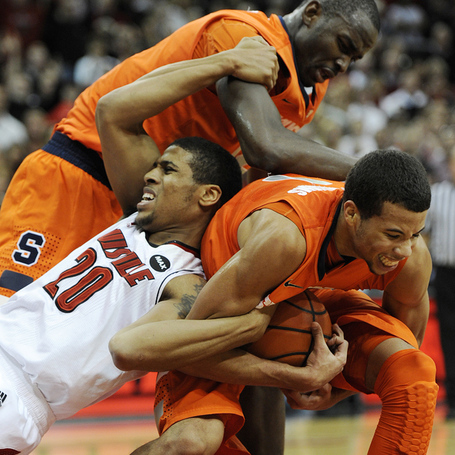 Anyway, basically everything that had to happen for us to lose that game happened. And it's not like this was against a crap opponent, this is a Syracuse team that has lost 1 game this season and currently ranks #3 in the country. And they play a defense that completely negates the considerable abilities of our star senior point guard, who, the game before, put on a clinic against UConn.

So taking all of that into account, our expectations for this season (Atlanta and a good shot at the championship) are not crazy. We are really good, and can still get better.

Are there worrisome signs? Of course - we looked REALLY tight in a close game, and one of our biggest strengths (depth) is not very helpful in a close game late because we can still only play 5 guys. We looked really tight - even Chane's basket to tie the game, an uncontested shot from a few feet away, he guided/pushed ever so gently it barely went in, and looked super weird. Wayne's shot in the closing minute also was short, and Siva's lack of confidence on those open 3s was a bad sign.

Maybe the best sign: at the under-4 timeout, everyone was tweeting that this was gut-check time: we had given up the lead, Syracuse was up 4, they had all the momentum. How did we respond? 4 points and defensive stops to tie it up, including 3 different offensive rebounds before the aforementioned Chane bunny to tie it. Then a 2 point lead on Russ Smith free throws. Gut? Checked. Then, the last minute happened.

Okay, far too much. It's over. We get not only another shot at Syracuse, but we get to play a bunch of games against teams that are not Syracuse.

One of those teams is Villanova. If you just can't get enough of my unedited prose, check out my post from last year about this game. If you just want the gist, it is this: weirdly, since we've joined the Big East, how we have done against Villanova has predicted the outcome of our season. In the 3 seasons we have beaten them, we have won the Big East twice, gone to the Elite 8 twice and the Final Four once. In every other season we have lost to them, and then we have not made it past the first weekend of any of those seasons. Correlation? Causation? Who the f knows.

This year's Nova team is not your flip-phone-owning or even iPhone-2-owning self: they don't just run 4 guards out there and bomb 3s. Their leading scorer is a forward (JayVaughn Pinkston) and as Rick Pitino says, they have good size and use it. They shoot free throws well and shoot a ton, so one of our biggest check-boxes for a loss (foul trouble for Siva, Russ and/or Gorgui) is lurking. KenPom rates them the 90th best team in the country with a better offense than defense (sounds about right), and their 11-7 (2-3) record shows this is not the Nova of old (Handspring Treo owning you for those who use their cell phone to temporally relate to basketball teams), and they have lost 3 straight for the 2nd time this season (Providence, Pitt, Syracuse this time, Alabama, Columbia and LaSalle the first time woof). I assume they still deny the entry pass on defense, but since our offense doesn't require that as much this season, that shouldn't affect us as much.

So, ya, a loss tonight would be really, really bad, both in the sense of history and in the sense of RPI, perception and team psyche. Can this team bounce back? Will Siva look like his old self and keep the confidence he's had since the Big East tournament? Will we, as fans, fall completely back into "we are so good let me chron all the ways we are so good and wax philosophical about the precious present" mode or has the Syracuse loss dialed us back a bit and made us a little more wary about our success? As @doctorofdunk said, can't March just get here already because the suspense and dread can be really overwhelming sometimes.

The 2011 season ended with that crushing loss to Morehead. Syracuse's crushing loss did not end our season. Yes, this season will end one day, too.