If some foreign being was studying our culture strictly by way of the Internet, it would believe that overzealous sports fans are only allowed to have one of two reactions when their favorite team loses: total panic or total dismissal.

Examples of case one include, but are not limited to: "We're done."; "These guys just don't have and never will have it".; "This is the worst team I've ever followed in my (insert age) years of being a (insert team name) fan."; and, of couse, "We suck."

Examples of case two include, but are not limited to: "This was a throwaway game, plain and simple."; "I'm honestly not worried at all, in fact, I guarantee this is the last time we lose this season."; and, "Wake me up when we play a game that actually matters."

Though there's no definitive set of rules for what does and does not constitue being a good fan, I think that generally the most healthy and accurate response to a loss falls somewhere in between these two extremes. Saturday's game is the perfect example.

Accurate case two points: The game was played on January 19. We have almost two months to go before the start of the NCAA Tournament. We knew that this team probably wasn't going to go the rest of the season without losing, so better now than March. Syracuse is a pretty damn good team, and it took a career day from Brandon Triche and some last minute heroics for them to beat us. Gorgui Dieng's cast, which will be removed soon, has appeared to be having a negative effect on certain aspects of his game. A few questionable calls at key moments went against the home team. This is a loss that the team will draw knowledge, experience and motivation from, and one which will ultimately make them better.

Accurate case one points: This team was supposed to different than the past ones that needed to "draw knowledge, experience and motivation" from a loss in January. With the amount of experience that was on the floor, there is no excuse for the mistakes that were made in the game's final minutes. It's not the fact that they lost, it's the way they lost that's do upsetting. Louisville is the first No. 1 team to taste defeat at home in four years. With Missouri looking like a fringe top 25 team, the Cards have now lost to the only two really legitimate opponents they've played.

Was Saturday disappointing? Yes. Is it justification for mass panic? Absolutely not.

This team has a bit more work to do than I think any of us thought three days ago, and while I can understand why that might be slightly dissatisfying to some people, I don't think it's a terrible thing. The end goal is the same, and it's every bit as achievable as it was at 3 p.m. on Saturday.

This is just part of the ride, and the ride is far from over.

So in the final minute we had Chane committing an inexcusable foul, Peyton throwing an awful pass, Wayne taking a questionable shot, Gorgui dropping a pass he probably should have handled, and Russ being in the wrong place on a possession where the game was on the line. That's all five players on the court making huge mistakes in the final 60 seconds of a one-possession game against the No. 6 team in the country. That just can't happen, and I couldn't be more stunned than it did.

Also, I don't know the best way for it to happen, but I do know that Russ Smith has got to at least touch the ball with the game on the line. Especially on an evening where he has been particularly efficient at pulling off Russ Things.

He shot the ball better (or at least more) against Missouri, but I think this was the best game Luke Hancock has played as a Cardinal. It was also the best total effort we've gotten from the three position this season, as Wayne did some really good things for extended periods of time.

This was a game where Luke's strong suits - passing, instincts, streaky outside shooting - could best be utilized, and he took full advantage. There have been plenty of times this season where fans have had the right to be upset with Hancock, but I think just as often, if not more often, the criticism has been unfair. The unfortunate thing for Luke is that his mistakes tend to stick out like a cornerback getting burnt on a deep route. It's the phenomenon that makes fans groan and throw their arms up when he misses an open outside shot, gets beaten off the dribble or doesn't have the speed to make a play on a fast break.

Hancock isn't the best player on the team (Pitino voice), I don't think there's a question out that. He also isn't the plague that fans who can't go a season without creating a personal scapegoat make him out to be. He has skills that have helped us win games and that are going to help us win games. Saturday was the biggest proof of that yet.

Russ, your thoughts on the blocking call where Michael Carter-Williams appeared to clearly put his off arm into your chest and then extend it? 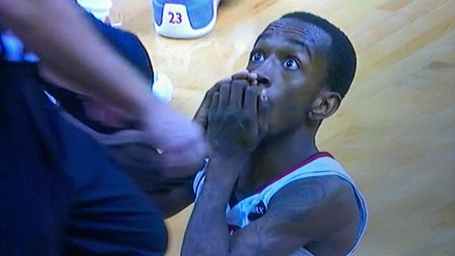 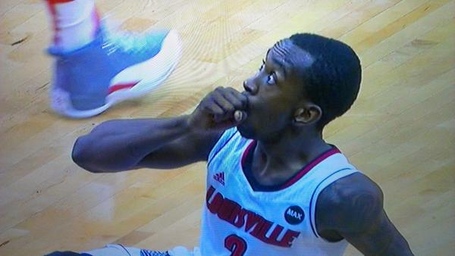 Russ Smith scored 25 points and then gave perhaps the quote of the night when he walked into the locker room immediately after geting cleaned up and was asked how long it would take him to get over the loss.

You have tip your fedora to Brandon Triche, that's two games in a row where he has absolutely killed us. That said, Louisville did a much, much better job on him in the second half, limiting him to just five points after the break.

The downside to that is that the awareness necessary to have a constant eye on Triche resulted in less overall aggressiveness from the top of the U of L defense. As might be expected, the decrease in Triche's shot attempts was paralleled by a decrease in Syracuse turnovers (just four in the second half).

When a guy is that hot, you either have to stick with what you're doing and hope he comes back to Earth, or you have to make an adjustment. Pitino made an adjustment, and even though it limited Louisville's chances to score cheap points off of turnovers, I think it was the right one.

Gorgui Dieng was the man again tasked receiving the ball in the middle of the Orange zone and then either making a move or finding an open teammate. He abused Syracuse with the pass early on, dishing out a career-high six assists in the game's first 25 minutes.

This time it was Jim Boeheim who made an in-game adjustment, and his paid off mightily. Once Gorgui had proven himself to be a capable zone buster, the Syracuse guards started sagging to deny him the ball. Ordinarily this wouldn't be possible, but the Orange have Carter-Williams, who's 6'7 and has arms like Montrezl Harrell. This created extra space for Peyton Siva...who finished 1-for-9 from the floor and 1-for-7 from beyond the arc.

In the end, Boeheim picked the most mild poison possible. Credit him for making a move that paid off.

Boeheim after the game on the Big East race:

Well he does know how to pick 'em.

Even though he had a great game passing, I really think the cast is bothering Gorgui on offense. The fact that he brought it up on his own during the pregame press conference tells you that it's in his head. He hasn't looked nearly as confident with his midrange jumper since coming back, he's not handling passes as well, and he's almsot always trying to finish with his right hand when he gets around the rim.

Syracuse continues to be 2-3 Kryptonite for Peyton Siva. I know scoring isn't at the top of either's list of personal strengths, but it's hard to envision a situation where Peyton and Gorgui combine to play 70 minutes, score just seven total points, and Louisville still wins. It didn't happen on Saturday.

If you love misery, here are the final two possessions that lost it for the Cards, in GIF form:

We talked about Luke a little bit earlier, but this was also one of Kevin Ware's best games of the season. He was active on defense (didn't record a steal, but got his hands on the ball multiple times), didn't force the issue on offense, and buried the only open outside look he got.

Not sold on the new random swirl in his head, though.

I know he leads the nation in assits, but I'm just not as enamored with Carter-Williams as the rest of the country is, at least not in games like this.

MCW is a terrific passer in the halfcourt, and his combination of skill, size and length make him a matchup nightmare, but his decision making and ballhandling are not at the level of an elite floor general. He turned the ball over eight times against the Cardinal pressure, and I'm not sure that number would be an outlier if Louisville and Syracuse played each other 10 times.

We have got to finish better around the rim. There's nothing really that I can add to that. Make your lay-ups and make your dunks, those are important points the team is missing out on.

The unnecessary Chane Behanan single dribble has returned, and I could not hate it more. Keep the ball high and put it in the basket, my man.

Not only is Michael Stephens a bad referee, but he compounds that unenviable trait by being a complete spotlight prostitute. Tell me what part of the officials' handbook instructs you to point excessively before making a demonstrative hand signal in a key situation.

Not only did Stephens blow the obvious offensive foul on MCW, but he somehow managed to miss the ball going out-of-bounds off of C.J. Fair's head, feet and hands before dramatically giving the possession back to Syracuse. They didn't lose Louisville the game, but those were two huge blown calls.

Everyone keeps saying that Wayne Blackshear needs to drive to the basket more, but not since Derrick Caracter have I seen a Louisville player draw contact without getting a foul call so consistently. I mean he got drilled on that baseline drive and finish in the first half, and the official right in front of the play didn't even flinch.

It all comes back to America's obsessive love affair with skinny people.

This was the best college basketball game I've seen this season. You'd like to be able to add "and I couldn't be happier that we won it" to the end of that sentence, but such is life.

We'll continue to talk about this one during the work day, and then we'll get ready for a game at Villanova on Tuesday that will give us even more stuff to obsess over. This is just how people like us spend our winter.

Again, it's all part of the ride.