Share All sharing options for: Game Day: Louisville Vs. Florida 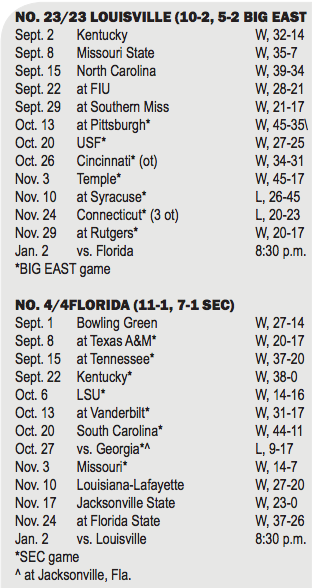 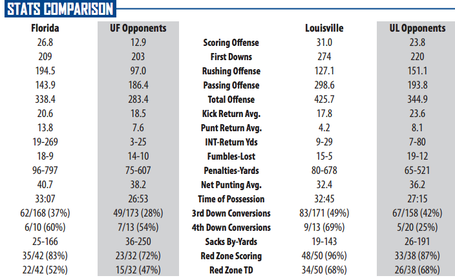 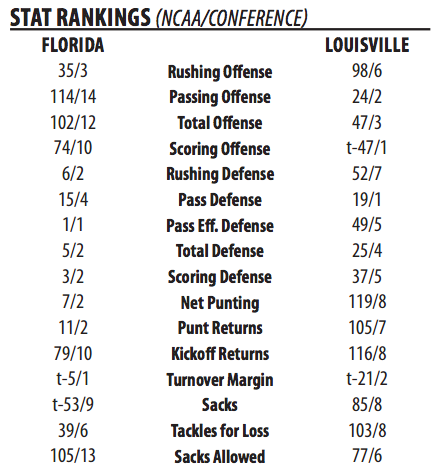 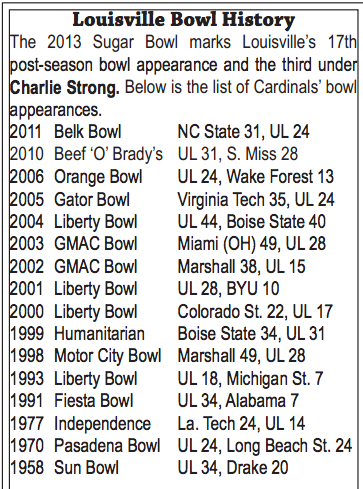 A Quick Look at Florida:

Florida, which finished third in the BCS rankings, will make its ninth Sugar Bowl appearance, tied for the third-most in history. Florida is 3-5 in its eight previous Sugar Bowl appearances, which most recently included a 51-24 win over Cincinnati in the 2010 game and also included a 52-20 victory over Florida State for the 1997 National Championship (1996 season).

UF has claimed a school-record four-consecutive bowls and will be making its eighth consecutive January bowl appearance, the longest active streak in the nation. In addition, the Gators will be appearing in a BCS Bowl for the seventh time, tops in the SEC and tied for the third-best total nationally. Florida's total of five BCS Bowl wins is tied for the top total in the nation and with a victory it will have the top total in the nation in all time BCS wins. UF will be making its 40th bowl appearance.

The defense has been the staple of the Gators over the years and this season is no exception. Florida ranks fifth in total defense only allowing 283.42 yards per game. In addition, Florida is first in pass efficiency defense (91.59), third in scoring defense (12.92), tied for fifth in turnover margin (0.75) and 15th in passing defense (186.42). The Gators have intercepted 19 passes this season.

On the offensive side of the ball, running back Mike Gillislee is one of the top runners in the country, averaging 92.0 yards per game, while quarterback Jeff Driskel has been solid, throwing for 1,471 yards and 11 touchdowns, while tossing just three interceptions. Florida has punished opponents on the ground, averaging 194.5 yards per game and have tallied 21 scores on the ground.

Caleb Sturgis has connected on 23-of-27 field goals this season and is tied for third nationally
in field goals per game. Kyle Christy ranks sixth nationally with 46.10 yards per punt while the punt coverage unit only allows 7.6 yards a return to give the Gators the No. 7 net punting average in the nation. Florida ranks 11th nationally in punt returns and have ran one back for a touchdown.

Pregame Meal: No set plans right now, but I'll probably do my main eating either during the Providence game or right before it. Could be a B-Dubs (spicy garlic) night. Also imagine I'll be nervously munching and drinking throughout the actual game.

Lost the fleece against Rutgers (although it returned for the victory celebration), and it made all the difference in the world. The same exact plan is on tap for tonight.

Bold Prediction: Louisville will make more than one field goal

It may not seem like it, but this is actually extremely bold since is something U of L has never accomplished in a bowl game.

Pretty hard to envision a scenario in which Louisville wins the game and this isn't the case.

--In terms of point spread, a win by Louisville over Florida would represent the largest upset in the history of the BCS.

--This will be Florida's seventh BCS game, tied for third-most among all schools. The Gators are 5-1 in their past trips to the BCS.

--Though though there was no BCS at the time, Louisville also defeated Alabama 34-7 in the 1991 Fiesta Bowl.

--Louisville coach Charlie Strong had four different staffs on the Florida staff, including seven years as defensive coordinator. He held that position when the Gators won the national championship in 2006 and 2008.

--Florida has committed just 12 turnovers, one shy of the school record for the regular season. UF's 12 turnovers are tied for the 6th-fewest in the nation this season, and their three interceptions thrown is tied for the 3rd-fewest nationally.

--The longest run Florida has allowed this season is 24 yards, that's the shortest such mark of any team in the country.

--This season, Florida has defeated four teams currently ranked in the BCS top 12. That's the most of any team in the country.--The Gator defense has allowed just 12.9 points per game, the fewest in school history since 1964 (9.8).

--Florida boasts the nation's #1 pass efficiency defense(91.49) and has allowed just 5 TD passes, the 2nd-fewest in the nation.

--This is Louisville's 17th post-season appearance. The Cards are 7-8-1 all-time in postseason play.

--Florida's streak of eight consecutive January bowl games is the longest in college football. Alabama has the second longest streak at five.

--Louisville comes into tonight's game having already locked up the fifth 10-win season in program history.

--This will be Florida's ninth appearance in the Sugar Bowl. They are 3-5 all-time in the bowl game.

--Florida ranks No. 6 in the country in time of possession, holding the ball for 33:07 minutes per game.

--Louisville has never made multiple field goals in a bowl game.

--The Cards are 12-34-1 all-time against the SEC, a mark that includes a Fiesta Bowl win over Alabama.

--Louisville hasn't faced a top five opponent since it defeated No. 3 West Virginia at home on Nov. 2, 2006.

--The Gators' 17 allowed touchdowns this season ranks behind only No. 1 Notre Dame.

--Louisville is 14-3 under Strong when holding opponents under 20 points.

--Florida is 12-0 under Will Muschamp when rushing for at least 150 yards.

--"I didn't see that (2010 Sugar Bowl) game. But if it's a blowout and Louisville and Florida is in that thing, it's going to be Louisville doing the blowing out." --Lorenzo Mauldin

--"We're playing a good football team. The films speak for itself. We have great respect for the opponent. And at the end of the day, regardless of who we play, we take care of it. As long as we take care of it the way we have, we'll play well." --Florida coach Will Muschamp

--"It's a whole different ballgame, it's a different level of football, in my opinion. It's more competitive, you face better athletes at every position. It's really an honor to play in the SEC and to play against SEC teams. It's just a completely different level of competition. You see people that put everything on the line, you see more heart. I just feel like that's something that makes the SEC a little different." --Florida center Jon Harrison

--"Nobody really gives us a chance. We kind of take that to heart and want to show everybody what we can do." --Marcus Smith

--"They have a tough front seven. They push offensive linemen back. They're just physical.(But) games like these, we're going to try and put an ‘S' on our chests and a cape on our back. You just take what they give you." --Teddy Bridgewater

--"I'm not saying (Teddy)'s 100 percent but he's going to be better than he was in the Rutgers game (Louisville's final regular season game on Nov. 29),'' Strong said. "The last few weeks have really been to his advantage because now he's been able to get healthy. And you look at it, our game plan is all about Teddy. Right now, it's on Teddy.'' --Charlie Strong

--"You look at (DeVante) Parker and (Jeremy) Wright and (Damian) Copeland, all three guys that can make plays in space. Parker, a guy that had nine touchdown receptions this year, Jeremy Wright has done a nice job filling in at running back position. And (Louisville offensive coordinator) Shawn Watson, I have a lot of respect for. (He's) able to spread the field to get his best athletes out in space." --Muschamp

--"This is a big game for our program. We haven't been in a BCS game in a while, so if you get a win here, it's a statement win." --Florida DT Omar Hunter

--"I have confidence in my team and the guys who I play with and I feel like this is a big statement game for us. I feel like we're going to make big things happen on Wednesday." --Calvin Pryor

Whether you're a player, a coach or a fan, these are the types of games you spend countless hours waiting for and daydreaming about. Let's seize the moment.