Technically the best team we have played yet, maybe not as good as Duke but right there.

Okay, so this is a bit of stretch, but Syracuse whipping us in football happened on their senior day. So, technically, we are on our 3rd straight senior day revenge game. Since the last 2 have worked out, just go with it. 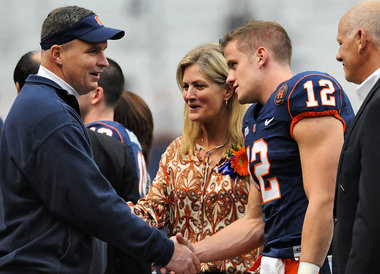 Technically speaking, I haven't seen Syracuse beat Louisville for a long, long time. I was on a plane for most of the White Out game and made it to the car JUST in time for Siva's pass to miss Dieng (luckily the next time we ran that play late in a game, against New Mexico, Dieng was ready for it) and I couldn't watch the game at Syracuse (also on their Senior Day - it's all coming together) so I missed the 9 point loss in what would be our last loss until UK (which means the combined records of the teams we've lost to since March 3, 2012 is something like 86-6) and have no idea how we looked in either of those games. So I'm going from the boxscore, recaps, my memory and a few fleeting VillenHD 2011-12 highlight video clips. Because while the teams are obviously different this year, many of the same parts are there. (Final parenthetical: both Siva and Brandon Triche played in the Kuric game at Freedom Hall. For some reason that seems weird to me). 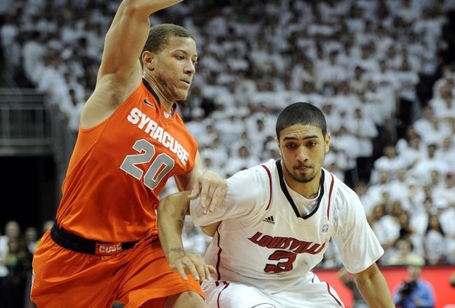 I remember that this game was ugly and that neither team could shoot, which was not out of the ordinary for us based on how we had been playing, but Syracuse's 1-15 from 3 for a healthy 6.7% was a bit of a shocker. Russ had 3 points, all on FTs, and missed every shot he took from the floor. Chris Smith was 3-11 (all 3 makes were 3s) and Kuric was 1-8 (1-6) meaning Chane Behanan had to, and did, pick up the scoring flak slack going 7-8 from the floor and leading the team with 16 points. Always been a bit of a big game player, that Chane Behanan.

We had a chance to win it, and actually were up a couple baskets late but couldn't score again after Chane's tip-in gave us a 5-point lead with 3:39 to go. A winnable game slipped through our hands, and we would only win 2 of our next five (DePaul Day Overtime Nightmare and ugly, ugly Pitt game) until the Big East tournament.

How Does This Help Us Understand Tomorrow's Game?

The good news: because our offense is improved this year, if Syracuse shoots that badly tomorrow, we will win by 25. The bad news: There is virtually no way Syracuse shoots that bad, or anything approaching that, tomorrow. Syracuse is ranked 16th in the country on offense (1st in the Big East) according to the stat heads. They are 2nd in the country in rebounding and first in the Big East, which means that even when they miss, they get chances, and if you miss, then you don't often get a second chance. Luckily they are not a great 3 point shooting team (especially without suspended James Southerland) but Michael-Carter Williams is one of the best if not the best guards we will see all season, and backcourt mate Brandon Triche is experienced and the main deep threat we will have to deal with.

Michael-Carter Williams is the key to this game. He averages a sick, sick 9.4 assists per game and compliments that with 3.2 steals, one of the highest in the country. At 6'6" he is a big guard and while he turns it over a decent amount, he will make you pay if he gets by the initial pressure. On defense as well, at the top of their zone, getting by and around MCW is going to be the only way our offense will function.

My memory of non-Kuric Syracuse games involve passes around the perimeter against the zone for like 20 seconds, and then a high pick and trying to find someone in the corner for a 3 or down low if the big man helps. Chane has been doing a great job of flashing to the middle of the zone, but it's hard to get him the ball when everyone in the world knows you are going there and you are trying to do it over really big guys like Triche and MCW. Gorgui may play more in the middle so we can throw it higher and have a bigger target - but as was discussed Wednesday on Twitter, his mid-range shooting has not come back like the rest of his game, and I'm wondering if it is because of the cast.

Either way, settling for 3s against this zone is not ideal, but Siva and Russ trying to either drive against or pass around/over MCW is not going to be easy.

Overall, the guard matchup is going to be the key to the game. 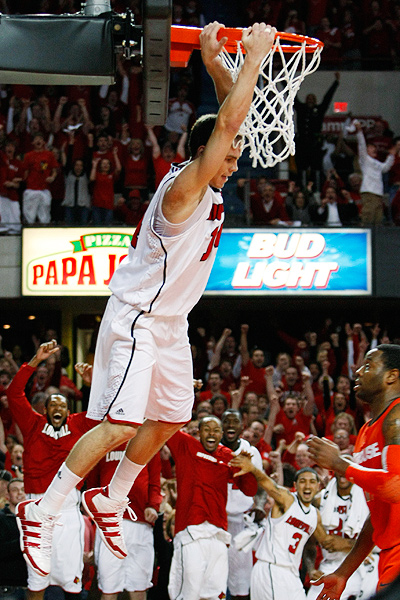 CJ Fair Is Going To Be A Problem

Inevitably, because the guards get all the attention, a guy like CJ Fair for Syracuse or Chane for us can really go off. Fair is a better 3 point shooter than Chane (and has a green light) and has a nice mid-range game, so expect him to get his shots. Sure, they boast two big guys inside who were 5-star, could-have-gone-anywhere guys in Rakeem Christmas and DaJuan Coleman, but neither score in even the high single digits. Of course, both of them can have rim-rocking dunks and Christmas is a shot-blocking threat (he's ranked 3rd in the country according to stats, and 8th in the country in both offensive rebounding metrics.

One thing about our rebounding - our big men don't really block out. We controlled the boards in 2009 because T-Will and Earl would just out jump everyone. Samardo got a bad rap for not rebounding, but how was he supposed to? His own teammates usually got them? This year we are back to that, and Gorgui and Chane have been doing an outstanding job on the boards. This will be their toughest test.

Anyway, the point is that CJ Fair won't get as much attention as the guards and our bigs will be focused on their bigs, so look for Fair to get a lot of sneaky points and open shots. And if our press is getting broken, he will get a lot of those pull-up and runners in transition and we will all go crazy.

But Honestly, I Have No Idea

Syracuse is really good, but we are deeper and they have not played a team as fast, athletic and with guards as good as us. They have had a couple of closer-than-the-final-score-indicated games recently (Nova, Providence, South Florida) and of course lost to Temple for their only loss of the season. They don't have any out-of-conference wins that are better than ours (beat Arkansas at Arkansas) and without Southerland, on paper, again, look to be big underdogs Saturday.

But, every time these teams play, something weird happens. I can't really explain it, but we always look like a completely different team against Syracuse than we do against other teams. In addition to the Kuric game, remember Mike Marra's game against them in 2010? That's a game we won after having been blown out by St. Johns a few days earlier. And Samardo had an in-bounds dunk on a play we've only run twice that I can remember, both to the least likely person to dunk it, and for some reason we never run it anymore even though you'd think Dieng could do it.

Watch that video and tell me that the things these guys do in this video resembles anything those same players did at any other point? That may be hyperbole but if we played like that in the NCAA tournament we could have beat Duke.

We are the better team and we are at home, but in this series, because the coaches know each other, because the talent level is so high, because we both play a zone that we are used to seeing, because this is a Big Freaking Game, it is useless trying to predict.

Just buy a ticket, take the ride, enjoy every second, and hope that the shots fall.

CL Brown had a blog post this morning proving with stats and stuff like a real reporter what this humble blogger just sorta was describing on gut feel. You need to read it.