A special news and notes picture today, as we celebrate the life of Chronicloid Kegan Miller (left), who just passed after being involved in a car accident on Sunday. In his spare time, Kegan worked with special needs children and adults at New Hope Services. He also made sure that his organs would be donated in the event that anything tragic happened to him. He's pictured here with friends Wayland Dietrich (middle) and George Napier (right). Our thoughts and prayers are with his family and friends.

Luke Winn's new power rankings are out, and they have the good guys on top.

Louisville has the nation's best defense, but its defensive performance does not always please coach Rick Pitino. The Courier-Journal reports that at halftime of the Cardinals' win over Seton Hall on Jan. 9, Pitino called them "13 Michael Jacksons" because they were speaking to each other too softly on D. Since then they've been quite stingy, shutting down the Pirates, South Florida and UConn in succession.

To get a sense of how Louisville's defensive quality has fluctuated over the course of the season, I borrowed a net-efficiency concept from Crashing The Dance, essentially asking the question: What's the difference between how the Cardinals defended in each game vs. how a D-I average defense would have been expected to perform against those same opponents? Here's the answer:

The performances are rated on a points-allowed-per-100-possessions scale; you'll see that the Cards' D was nearly 40 points/100 possessions better than an average team against South Florida, and that the absence of center Gorgui Dieng from the Duke game through a portion of the Kentucky game brought them much closer to the D-I baseline.

Mike DeCourcy says Indiana has the highest ceiling in the country, but that right now Louisville is the best team.

Louisville, however, knows what it is. Its potential is not as grand as IU's, or even Michigan's or Arizona's, but the Cardinals reached the Final Four last season once they fully committed to their defense, and that has been in place throughout the year. They are No. 1 in defensive efficiency according to Kenpom.com, and they've earned that. They are destructive on the perimeter (12.4 steals per game) and at the rim (2.2 blocks per game from center Gorgui Dieng).

They don't shoot well enough to be a great offensive squad, but they've found a way to make it work, mostly by being a nightmare to keep out of the lane. Will Louisville still be the best by March? It seems doubtful, but here is what's certain: The Cards are one team we can trust to be in the picture.

He's a nice player, but I have a problem with the assertion that a team with Jordan Hulls as its point guard has a "higher ceiling" than any other in the country.

Lakers Blog Silver Screen and Roll takes an extensive look at why they like Earl Clark so much.

This is what it feels like to be a human being who has never experienced a Cardinal loss. 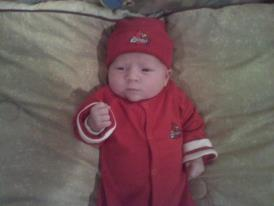 I've been informed that Gorgui Dieng was beside himself about the Diengo: Unchained photoshop, and that he was "parading around, showing it to everyone like a little kid."

Also of note: Tomorrow is Gorgui Dieng's birthday. I assume all Louisville schools and places of business will be closed.

On Sunday, the world apparently celebrated "No Pants Day." Also known as "Sunday" around these parts.

Some 2012 Teddy Highlights for your viewing pleasure:

Russ Smith does not make the Sporting News' Midseason All-American Team, which is absurd.

I don't know he'll deserve to be an All-American or in the Player of the Year discussion at the end of the season, but if the season ended right this moment, there's no question that Russ Smith would have to be a first team All-American. He's averaging nearly 20.0 ppg for a coach who rarely has individuals average more than 15.0, he's ranks 16th in Division-I in steals, and he's doing it all for the No. 1 team in the country.

Right now, Russ is an All-American, and I don't think it's debatable.

A big thanks to all of you all who came out to the Meat & Potatoes program last night. We proved once and for all that we're capable of having an entertaining discussion without Gorgui Dieng.

I can also now use "I've autographed multiple bird masks" as the creepiest pick-up line ever uttered. 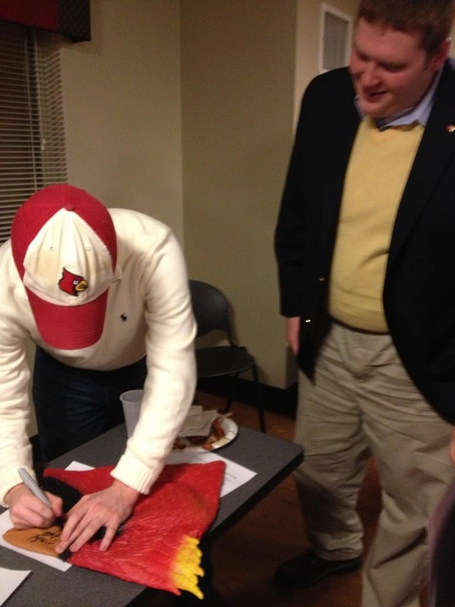 But seriously, thanks to all you guys. It's a cool program.

The KFC Yum Center gets a little love (video) in the discussion about college basketball's best arenas.

I'll have more on this tomorrow, but the list of football recruits in town this weekend is quite large and star-studded.

Louisville joins Duke as the only two schools with the top pick in the MLS, WNBA and NBA drafts. Farrell, McCoughtry & Ellison. #ACC #L1C4

If you've ever played one round of golf, then watching Tiger Woods top a drive in Dubai is going to make you feel better about yourself.

One of the great anomalies of this sport, given the Cardinals' lush tradition, is this being only the second week they have ever been at the top of the polls. Defense is driving the surge; nearly 33% of Louisville's points have come off turnovers. The ranking might one day go, but the defense shouldn't.

Here's another Cardinal stat that has nothing to do with getting to No. 1; or maybe it does. The team GPA for the fall semester was 3.41.

I suppose we need to replace "Charlie Strong's 9th Favorite Blog" with "As Seen on College Humor."

That's not really going to happen. I was just joking. I like to joke sometimes.

My stomach has been going apeshit today, and I have absolutely no idea why. I know you're probably thinking that I'm overblowing this, but we're talking about multiple room-spanning audibility here. Something is alive and extremely unhappy inside there.

I'm only mentioning this because it's legitimately been distracting me the entire time I've been writing this post. I'm hoping that acknowledging it will serve as some form of acceptable sacrifice and it will return from whence it came.

In case you weren't aware, Rick Pitino and Jim Boeheim go way back.

"I have the greatest respect for Rick as a person and as a coach," Boeheim said. "He's a fun guy to be around. We have a lot of fun when we're together.

"On the basketball court, I don't think there's a better coach. I think he should be in the Hall of Fame, probably will be in the Hall of Fame soon. He has just an unbelievable coaching record. His teams are the best prepared teams that you ever play against. They also do the most different things to prepare for. Very difficult coach to prepare for."

Since taking over as the No. 1 team in the country, Louisville beat UConn Monday night in Hartford. The Cardinals, whose only loss came to Duke, are among the deepest teams in the country.

"They do everything well," Boeheim said. "They really don't have a weakness. ... I think last year they were a little bit younger, their guards were good. Now this year, I think their guards are great. The best backcourt in the country, probably."

Former Syracuse guard Scoop Jardine is quite confident (podcast) about the Orange's (that just sounds so awkward) chances to pull the upset on Saturday.

I have no idea what the Ville Grill's "Chopstick Challenge" is, but apparently Russ Smith participated in it, which makes me very intrigued. 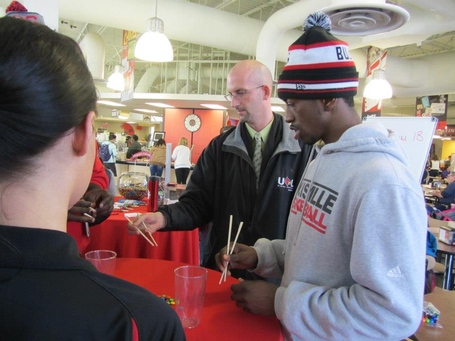 If anybody can tell me what this is or, more importantly, how Russ fared, I would greatly appreciate it.

Luke Lapinski of ESPN looks at why Louisville is better this year (Insider).

Despite not having as much size as they have in some years past, Syracuse has transformed itself into a pretty good rebounding team.

The Orange is the league's second-best offensive rebounding team, collecting its own missed shots about 42 percent of the time.

SU's defensive rebounding statistics land the Orange in the middle of the Big East pack at No. 9, but judging from where SU resided last season, that's a large leap. When the ball comes off SU's defensive glass, Orange players grab it 69 percent of the time.

"I think we're more focused on rebounding because we know that that's something we've been lacking in the past," SU forward C.J. Fair said. "And then, we get more rebounds out of our guards. That's helping us. We see Mike and Brandon down there banging with us. It's a whole team effort. Everybody's out to rebound, so that makes it better."

And finally, I'm back on the radio tonight from 6-8 on ESPN 680. There's certainly plenty to discuss, so listen live or anytime on ESPNLouisville.com.