That's Ken Ford and daughter, Kayla, celebrating the UK and Sugar Bowl wins in French Polynesia. Or Australia. One of those. I'm not good with landmarks.

Both Chane Behanan and Luke Hancock say that the No. 1 ranking isn't having any effect on the Cards.

"I don't think we should let it get to our heads; it's something that we deserved," forward Chane Behanan said. "Obviously, whoever does the rankings thought that (we) deserved it. We have to embrace it and just keep rolling on and continue to win and do what we've been doing."

Junior Luke Hancock said the expectations the Cards have for themselves are reason enough not to celebrate. After all, most of the players returned from a Final Four team, and they were No. 2 in the preseason polls.

"I don't think it's really affected too many people; we knew we were a good team to start," Hancock said. "Being No. 1 is the same to us as being No. 5 or No. 3 or wherever we were, so it's not too big a deal."

Russ Smith, meanwhile, is producing a full-length documentary on this week's polls.

Louisville is a No. 1 seed in the latest projected brackets from ESPN and CBS. SB Nation, meanwhile, continues to have the Cards as a two seed.

We had multiple CC Bird Masks in the XL Center on Monday. 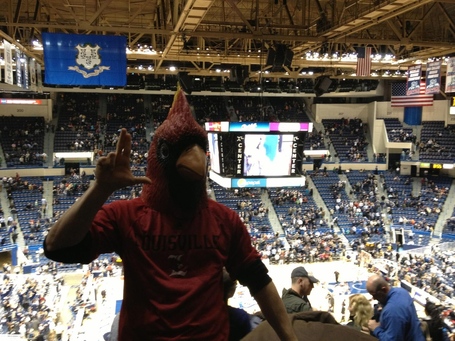 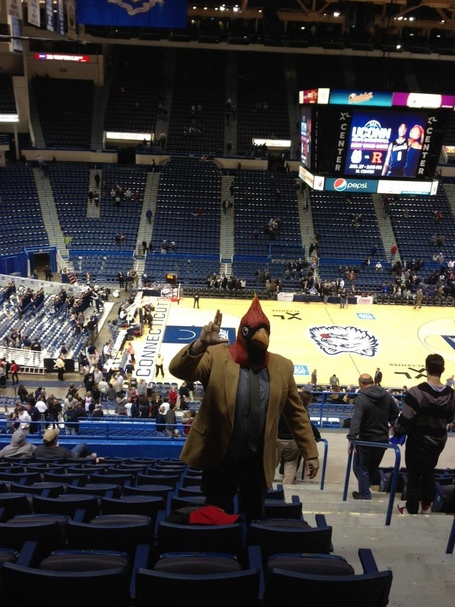 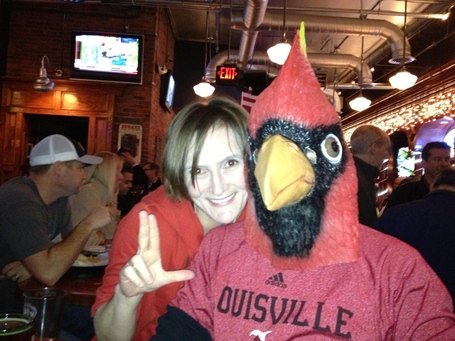 So damn proud of you all.

Louisville appears on Bill Connelly's list of the top 100 college football games of the 2012 season three times. The Cards warranted mention for their wins over Cincinnati (No. 76) and Florida (No. 73), and their loss to UConn (No. 59). The Connecticut loss also received the "Weidest Game of the Year" award.

It's hard to critique a list that considers every game from an entire college football season, but I would have put Louisville/Rutgers above all three of those.

Russ holds steady at No. 4 in CBS' latest player of the year rankings.

4. RUSS SMITH--PREV. 4
G | 6-0 | JR | LOUISVILLE
Smith struggled against South Florida and scored eight points while playing on an injured ankle, but he responded with 23 points in a road win against UConn on Monday night and is averaging 18.9 points for the top-ranked team in the AP and Coaches polls. Smith is also one of the top on-ball defenders in the nation.

The C-J has a Q&A with Kyle Kuric, who is having a successful first season in Spain. 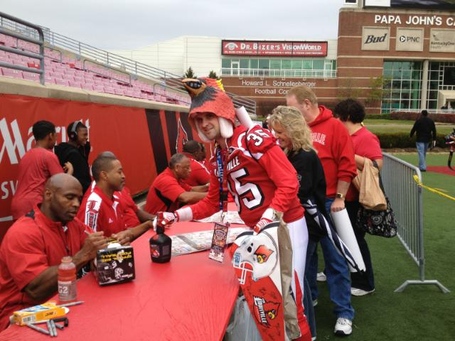 Coincidentally, I've been working on a comic with the same title. It is not being received very well.

Andrea Adelson writes that Teddy Bridgewater is a legitimate Heisman Trophy contender heading into the 2013 season.

Bridgewater essentially did what he wanted against what was supposed to be one of the best defenses in the country. That performance was about what we have seen out of him all year, but because he did it on a national stage against the No. 3 team, it is fair to say Bridgewater had a breakthrough moment. And that is what he needed to get people to start paying attention in 2013.

As I wrote earlier this month, his 2013 Heisman campaign began with that game. Now we will see whether he will be truly considered as the year goes on and he faces competition that is not as tough as the other would-be contenders out there. I think it is going to take the Cardinals going undefeated and Bridgewater improving on already terrific numbers to get an invitation to New York.

I don't think any of us are going to fully realize just how important the Sugar Bowl was to Teddy's national perception until the 2013 preview stuff starts rolling in over the summer. I don't think it's a stretch to say that he'll have more hype heading into a season than any Louisville player ever, and that includes Brian Brohm in the summer of 2007.

Despite a 72-58 loss to Connecticut on Tuesday, Louisville women's coach Jeff Walz was pleased with his team's effort.

Edgar Sosa is getting another shot at professional basketball, signing a one-month contract with a team in Spain's top level league.

Attention male U of L students: I'm back as a guest panelist tonight for the January version of Meat & Potatoes at 7:30 at Community Park. 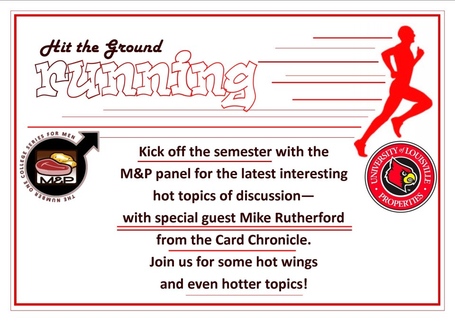 If the planned "hotter topics" included something other than season two of "The OC," well, that's about to change.

Email of the week: A 10-year-old who says Chane Behanan looks like Marty the Zebra from Madagascar. I'm not quite seeing it, but I think the young man will be a valuable member of this community one day.

Seth Davis says Louisville/Syracuse is one of five games he's "psyched" to see this week.

Unless James Southerland returns for Syracuse, this is going to be a very tough task for the Orange. The good news is the 'Cuse has no midweek game, so that should give Jim Boeheim some extra prep time. It will also give Michael Carter-Williams some time for shooting practice.

Louisville will be receiving a visit from elite 2014 shooting guard Shaqquan Aaron on the first weekend of February.

The Louisville ice hockey team will be having its "Kid's Night" when the Cards face Tennessee on Saturday at 7 p.m. at Iceland. Kids 12 and under accompanied by a paying adult will receive a free t-shirt.

I was also asked to inform you that there is a bar upstairs run by one of the goalies' moms that servers good food (try the buffalo chicken wrap) and has great beer prices. The bar has windows overlooking the ice to make sure you don't miss any action.

Just how well are things going for the University of Louisville right now? Uh, we have the No. 2 choir in the mother f'ing world. 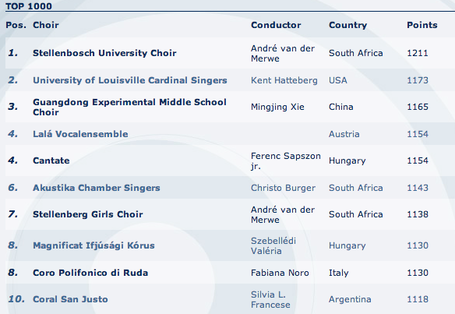 Also, I am now making it my personal mission to set-up a sing-off between Stellenbosch University and the Cardinal Signers. And if you don't think I'm going Saved by the Bell glee club episode with my sabotage efforts, well...let's just say you're going to be surprised at the speed of the Stellenbosch music and the fact that none of their singers can stop hiccuping.

USA Today makes the case for someone other than Louisville to be No. 1. You can go ahead and edit out that Indiana paragraph now.

Bossin' all the Big Ten, you know what it is.

Top five pictures of the season so far: 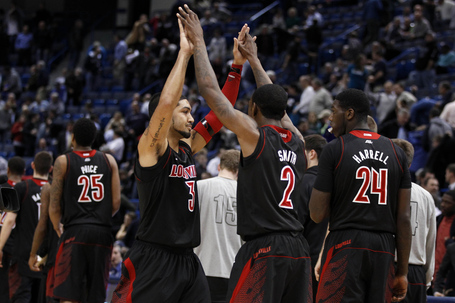 I want to run through that tunnel more than mere words could ever convey.

He's since deleted the tweets, but former UK wide receiver expressed some extreme frustration with the University of Kentucky on Tuesday. Interesting to see Wildcat linebacker Bud Dupree in agreement with Boyd.

Offense may be winning all those NFL games, but defense still wins in college hoops. No. 1 Louisville is playing defense at historic levels.

In 2010-11, Rick Pitino's team allowed teams to score just .879 points per possession, fourth best nationally. Last season, the Cardinals allowed just .84 PPP, best in the country and enough to get a truly wretched offensive team to the Final Four. This season's defensive numbers are ridiculous as the 'Ville has improved again, all the way to just .799 PPP, first by daylight at that track.

To put the PPP numbers in perspective, understand that Louisville averages 69 possessions per game and forces nearly 20 turnovers so 29 percent of its defensive possessions do not even result in a shot.

A 12-minute second-half blitz at UConn Monday was a perfect illustration of what goes down when this team turns up the heat - in 20 possessions, the Huskies were 2-for-13 and had seven turnovers. It was UConn 36-28 when it started, Louisville 60-44 when it ended, a 32-8 masterpiece in those 12 minutes.

Syracuse is 3-7 all-time against No. 1 teams, but has won two of its last four games in that situation.

The Daily Orange has a nice feature on Hipster Gorgs. 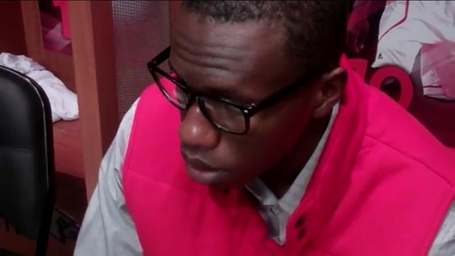 We're a few weeks away from needing an update on the top ten Gorguis.

Syracuse will be playing Louisville without senior forward James Southerland, who has been declared ineligible indefinitely because of an academic situation. The Juice Online looks at what that means for the Orange.

And finally, with it being Syracuse week and all, it's time to get this up and on a continuous loop on every television you have access to.