The Big East Basketball Grind Is Upon Us

The heart of basketball season in The Ville is here.

Share All sharing options for: The Big East Basketball Grind Is Upon Us

I once interviewed a guy who had just been on Jeopardy. He had won on his first appearance but lost the second by blowing it in "Final Jeopardy" (Fun fact: They actually tape all five episodes for the week in one day. Trebek has the best job ever).

The guy spent the bulk of the interview going on and on about how unbelievably fast the game moves when you're actually participating. If you take any time to stop and celebrate a small victory or defeat, he said, all of the sudden you're way behind.

It's almost a perfect metaphor for life in the Big East basketball conference. There's simply not enough time to bask in the glow of a top ten victory or sulk over a loss to DePaul Rutgers. Something big is always about to happen. Somebody else very good is always just 2-4 days away. 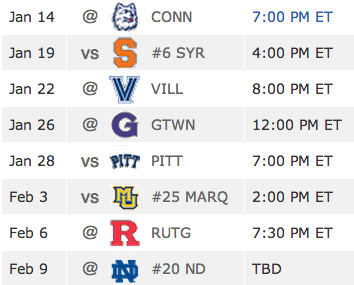 Today marks that first January day - for me at least - where it really hits you that Big East season is here, and the realization that this is life for the next two months starts to set in. Big Monday is back and the chill outside feels familiar again.

This is what carries us through a pair of otherwise unendurable months that offer little else outside of cold and darkness and teddy bears holding candy hearts.

It's another one of those "in reality sports matter so little...except that's not really true at all" deals.

Think about a life in late January or early February where you couldn't spend Mondays or Wednesdays at work/school reading and thinking about that night's game with Connecticut, or looking ahead to attending Saturday's showdown with Syracuse. "Miserable" might be taking things too far, but it's certainly a life less enjoyable.

Rushing home from work on an especially dark 5:30 day to kiss the wife, grab a quick bite, and then head to the arena or get focused on your favorite couch for the two hours of the day you've looked forward to since the weekend. Skipping 3:30 class because you know you'd just spend the time there on your computer reading some local blogger's breakdown of Cincinnati. It's what post-Christmas winter life means to people like you and me.