The Cards travel to Storrs, Connecticut for what promises to be another classic battle with the UConn Huskies, who ruined the Cardinal football senior day and injured Teddy Bridgewater.

Since it worked so well Saturday, tonight's showdown with unranked and post-season banned Connecticut presents the Cardinal basketball team with another chance for sweet, sweet revenge for this: 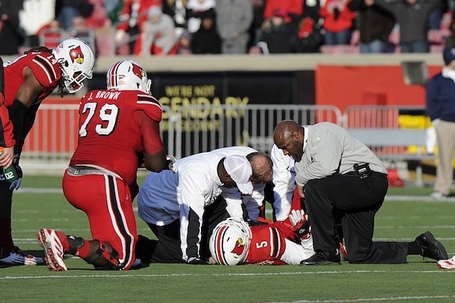 Not that your average Connecticut-Louisville basketball game needs any added fuel or emotion. You can almost go back and recount every one of our meetings since we joined the Big East in 2005. No matter where the teams were ranked, it has always been a battle and every game has had a significant impact on our season.

In 2005-06, UConn coming to town was one of the biggest tickets in Freedom Hall history, a Saturday night game hosting then-No. 3 UConn and if I remember correctly, College Gameday. That UConn team was just too good: Josh Boone, Rudy Gay, Hilton Armstrong, Marcus Williams and Craig Austrey started and Jeff Adrien and Rashad Anderson came off the bench. We were only down 3 at half but UConn was just too good and we fell 71-58. That team, in the first season in the Big East, just wasn't ready to compete with the best, and had an outside shot at the NCAA tournament if they could win their last regular season game. UConn was ranked 2nd and trying to win the Big East regular season crown, but again we played them close in the first half going in tied. But this time we kept it close the rest of the game as well, ultimately falling by 4 into the NIT.

The 2007 team whipped a down UConn team (ended the season 17-14 and 6-10 in conference) at Freedom Hall and then went on the road and Derrick Caracter abused Hasheem Thabeet in the first half and then barely saw the floor the rest of the game in what was a microcosm of his career at Louisville. We won that game too, 76-69. We lost the only game against them in 2008, and of course the 2009 team #1 overall seed team was blown out because that UConn team matched up so, so well against us. As awful as that Michigan State loss was, UConn was waiting for us in the Final Four, and unlike this year, deep down I knew we weren't the best team in the country.

We beat them down in 2010 at Freedom Hall,and then here are the games that followed by a few words that evoke that game's defining characteristic:

So if you are scoring at home (ahem) we have lost to UConn once since the 2009-2010 season, in the Big East Championship game, when they went on to win the national championship 6 games later. And we haven't lost on the road at Connecticut since January 28, 2008. That was FIVE years ago. That's astounding.

This year on paper seems like we should be big favorites: we will come into the game possibly ranked #1 or #2, UConn has played well of late but is just not as good as they were last year. They are led by guards Shabazz Napier and Ryan Boatright, two outstanding players. But their inside game is their weakness, which is strange for UConn: DeAndre Daniels and Tyler Olander provide the size down low, and while Olander is coming of a career game at Notre Dame, he's not Thabeet or even Alex Oriakhi. KenPom ranks them 43rd, which is respectable and 1 spot ahead of Memphis and 18 spots below Notre Dame who they just beat so there you go.

But the on-paper matchup does not matter against UConn, not this year or not ever. We always seem to play better against them - except that one game in 2009 when T-Will was the only guy who looked like he belonged on the same floor with them. The problem that year was that our team had 1 way to win, and UConn matched up really well against that style: we couldn't outrebound them, our press didn't work against their guards, we couldn't score inside and our 3 point shooting wasn't good enough. In 2011, we should have won the BET championship game and easily could have, but they were a team of destiny apparently (but see: Draper, Don: "The universe is indifferent.") By my count, since 2009, that's 1 UConn win on the merits and 1 on the intangibles.

Here are the intangibles to worry about tonight: Louisville's high ranking means we are ending our Big East run having not only built a team that can compete but that has won 2 BETs in the past 4 years, been a few calls/bounces away from a 3rd and consistently competes for the top 1-3 spots in the regular season. And consistently beats mighty UConn. But it also means that we are playing every game with a target like the teams that we hosted in the early days, and a team like UConn with nothing to lose (they are post-season ineligible) playing for pride for a great, up-and-coming coach and on national TV....they have enough talent and enough confidence that they can beat us.

So let's hope that this is one of those games where the tangibles overcome the intangibles. I hate to say this heading into such an obvious loss opportunity, but we are really really good this season. We don't win in just one way or with one style, and short of extreme foul trouble we have few tangible weaknesses. Sure, we shot terrible from 3 yesterday, but we've been winning games without 3s and our offense is producing lots of 2s. Sure, Russ Smith has had a rough stretch of games since all the attention really picked up in December, but we are winning without him putting up 20 every night. Sure, if Siva goes out our back-up point guard situation is not that great.

Look, we have played so many close games the past few seasons, and won so many of those close games, that there are very few situations that are new or potentially overwhelming. Just watching VillenHD highlights of our past UConn road games - big shot after big shot from these same guys.

I don't know what else to say. Other than maybe the Syracuse games, we will be the better team in every game we play from here on out. And in most games, by a wide margin. If we lose a game, it will be because multiple things have gone wrong, the other team plays better than they normally play, we take too many 3s and miss them, the other team makes a lot of their 3s, and we have bad foul trouble while the other team doesn't.

May happen tonight. We may blow them out. But if past is prologue, 5 years from now someone will say a few key words and you will know exactly which UConn-Louisville game being talked about.