The third-ranked Louisville Cardinals will host South Florida for the first time since the Bulls stunned U of L inside the KFC Yum Center on senior day a season ago. 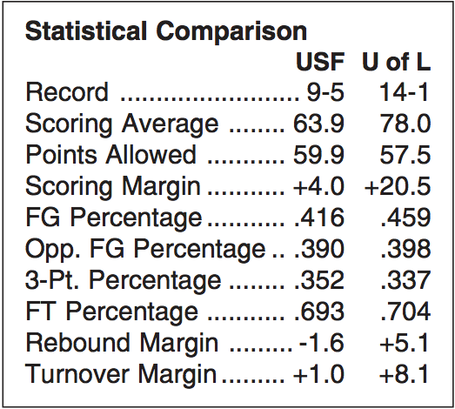 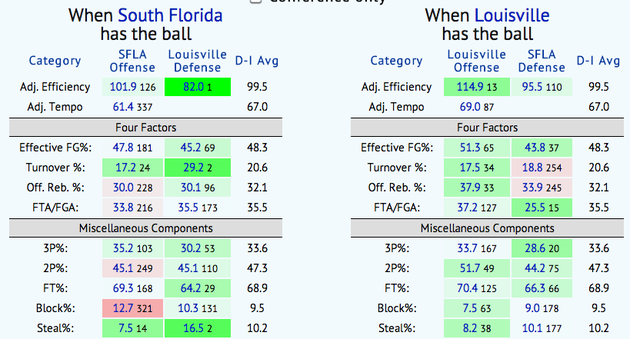 Today is a sad one for me, and for all of Card Chronicle, really. The reason being that this is the first time in five years that Louisville has faced South Florida in basketball and we haven't published the iconic "Five Memorable South Florida Bulls" post.

I always said I'd continue posting it until the Bulls managed to knock off the Cards, which occurred for just the fourth time ever 10 and-a-half months ago on senior day. The result is the end of an era.

If that's not enough to have you hellbent on revenge, then let's go ahead and hold a quick refresher course on what exactly took place on senior day/leap day a year ago.

--I was denied my usual parking spot, causing me to scramble and pay to park for the first time this year.

--Peyton Siva showed absolutely none of the glimpses of a corner turn that we'd seen (however briefly) in recent weeks.

--I slipped on my senior night poster during halftime and fell into a passing old woman.

--My senior night poster was ripped as a result.

--The worst mascot in the history of mascots, QUACKY, was brought out for absolutely no reason at halftime and did absolutely nothing.

--The seniors didn't address the crowd after the game for the first time I can ever remember.

--It took me approximately three hours and 45 minutes to get home.

--White Castle shafted me a chicken ring and cheese.

--Pretty sure it was intentional. The kid had a tone.

--Misspelled the word "was" in my initial angry postgame tweet.

--Louisville scored 51 points in its second-to-last game of the regular season.

--It's officially March in less than two hours and I feel like I can't even be excited about it.

If only I could speak to that young man and let him know that everything is going to be more than all right. I'd also like to speak to that woman because I still feel really bad about drilling her like Zed Evans on a kick return for no apparent reason.

As for the actual game today, South Florida has been one of the bigger disappointments in the Big East so far this season. Despite returning the bulk of a team that won a pair of games in the NCAA Tournament last year, the Bulls lost non-conference games to the likes of Central Florida and Western Michigan, and are off to an 0-2 start in league play.

It's no secret that Louisville thrives off of opponent's turnovers, which is how they've scored 34 percent of their points this season. Part of the reason USF had so much success against the Cards last year was that they had (and still have) a terrific point guard in Anthony Collins. Though Collins hasn't made quite the leap from his freshman to sophomore season that some were predicting, he still ranks third in the nation in assist rate (48.8), and has lowered his average turnovers per game from 3.4 to 2.5.

The Bulls as a team are only turning the ball over 10.9 times per game, which presents an obvious challenge for the Cardinal defense.

"They have an old-school style of play where they play possession basketball," Rick Pitino said. "And they have a point guard (Collins) who can dominate those possessions."

Where U of L has a decided advantage over South Florida is inside.

USF's only true big man heading into the season, 6-foot-11, 275-pound Waverly Austin, was denied admission three days before the fall semester and is now doing big things at Oregon. Another inside presence, senior Kore White, has missed the last four games because of injury.

The lone bright spot in the paint for South Florida is leading scorer/rebounder Victory Rudd (11.6/7.9), who also possesses the ability to burn opponents from the perimeter. He's attempted 20 three-pointers over USF's last three games, but made just three of them. Limiting Rudd will be priority numero uno for the likes of Montrezl Harrell, Wayne Blackshear and Chane Behanan.

If the Cards can shoot the ball well early and force South Florida to pick up their style of play, then that bulky 19-point spread will appear justified. If they're cold from outside and unavailable to create easy opportunities off of takeaways, then we could be in for another root canal of an evening.

--This will be the 50th Louisville game played inside the KFC Yum Center.

--Louisville shot 34.0 percent in last season's loss, its worst mark at home in the past two years.

--The Cardinals are outrebounding opponents by 5.1 per game while the Bulls rank 13th in the conference with a minus-1.6 margin.