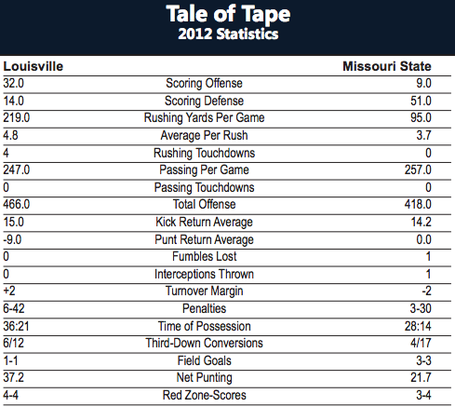 I can't lie and say that there's not at least some letdown (personally) the week after the Kentucky game, but a nationally ranked Louisville team playing at home on what should be a beautiful afternoon is more than enough cause for excitement. Plus, it's my last chance to tailgate for six f'ing weeks (in a wedding next week...will burn it down if we lose) so I gotta savor it.

Yes, I'm going to at least bring the poncho.

Pregame Meal: We're feeling a March 2012 run of repetition and success coming on, so we're going with the same spread as last weekend. Except I'm not going to bring a cookie cake since NO ONE ATE ANY OF IT LAST WEEK. The fine folks at the Westport Rd. Kroger went out of their way to make a beautiful "Cardinal Strong" cookie cake, and we can't give them the decency of cutting a couple slices. Don't worry, I've spent the past week remedying the situation,

Titus Teague Playing Alert Level: Infra-Red (It's happening. He will play special teams and he will play corner. This is the second half I spent the entire month of June dreaming about. Make it count, 18.).

These will get a bit more diverse when...well, when someone other than Teddy Bridgewater is going to give the most notable performance in a game.

--Missouri State is 1-27 all-time against FBS programs, coming up winless in each of its last 26 such contests. This year marks the second straight year in which MSU will play more than one FBS team in the same season. The Bears dropped games against nationally-ranked Arkansas and Oregon squads last fall. They defeated UNLV 31-24 in 1990.

--Louisville boasts a 37-18 record against non-conference foes since the 2002 season and were 2-4 last season in non-conference games. The Cardinals are 7-6 in non-league games under head coach Charlie Strong over the last two seasons.

--The Cardinals are 7-0 under head coach Charlie Strong when scoring 30 or more points in a game.

--Missouri State hasn't had a player rush for 100 yards against an FBS opponent since 1998.

--The Cardinals went red jerseys and red pants for the 32-14 win over Kentucky last Sunday. It marked the first time in the Charlie Strong era that wore the red tops and red bottoms. The Cardinals deviated from their typical red jerseys and white pants one other time when they wore black uniforms versus West Virginia in 2010.

--"You like to think that we're more mature now that we've played a lot of games. You can always go back to last season, and we beat Kentucky and we followed it up and got beat. We cannot allow that to happen and we're at home. ... (You'd) like to think that you don't have to go through it again." --Charlie Strong

--"You come in and have a rival game and they were ready to go play that game. Now, we just hope that in our performance, our practice and our preparation, we cannot allow them to step back." --Charlie Strong

----"We had over 400 yards against a Big 12 defense and that's a pretty good indicator. The two quarterbacks did a really nice job. That's the first time they've played a whole bunch of college football and did some good things." --Missouri State coach Terry Allen

--"I always like the team that says we're going to run the power at you all game, but that's not how college is now. Everybody wants to spread the ball out and beat you out in space, so we have to adjust to it." --Preston Brown

--"They spread out that way so they can identify where the coverages are, where the blitzes are coming from - a lot of what we saw this past weekend from the University of Kentucky. We expect to see some of the same things. They (Missouri State) run the ball a little bit more, but it's going to be a lot of quick pass game again." --Vance Bedford

--"I don't think the score indicated how we really played in the game, but it happens. We missed some opportunities and we have to take advantage of them next time." --Missouri State quarterback Ashton Glaser

----"They return all starters on defense. ... Our challenge is going to be getting our players ready to go play. Now, we just hope that in our performance, our practice and our preparation, we cannot allow them to step back. We have to continue to prepare and continue to get this team ready to go play. We have a short week." --Charlie Strong

--"We're not going to be complacent. We're just going to stay humble and keep working one game at a time." --Senorise Perry

Zero sign of a letdown here would make quite the statement, and that's exactly what I expect to see happen from this group. If the team doesn't have the right attitude and the level of maturity to come out and take care of business when they should come out and take care of business, then they probably aren't going to achieve anything special later on in the year.
I don't think there's any way this coaching staff and this team's leaders let that happen.