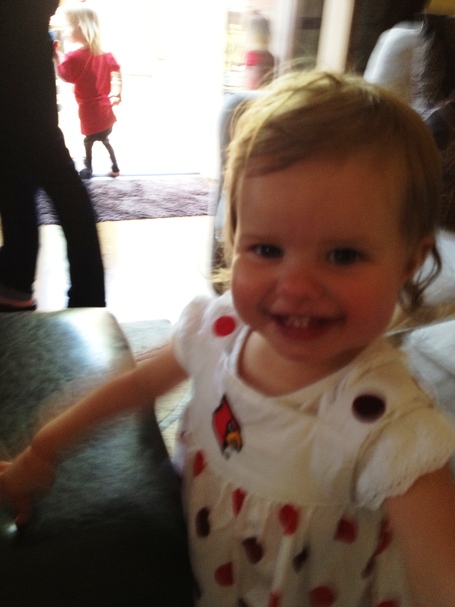 Stella Ryan Sanford sent this picture in and said she had "her fingers crossed" that she would get her "15 seconds of fame." With that dress and that smile? Young lady you were a lock.

ESPN has released its first Heisman Watch of the season, and look who's sneaking in there at the bottom with a fifth place vote. 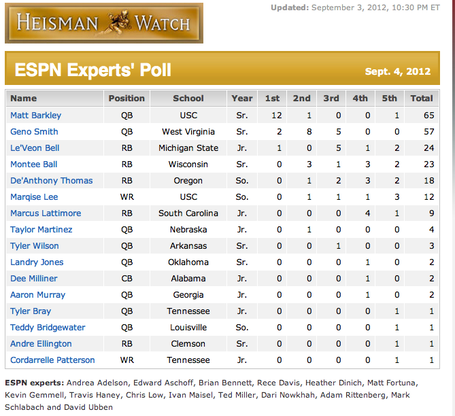 The NFL season gets underway this evening, and the big news as far as we're concerned is that Bilal Powell has beaten out Joe McKnight to earn the job as the New York Jets' 3rd down back.

Terrific news for one of my all-time favorite Cardinals. 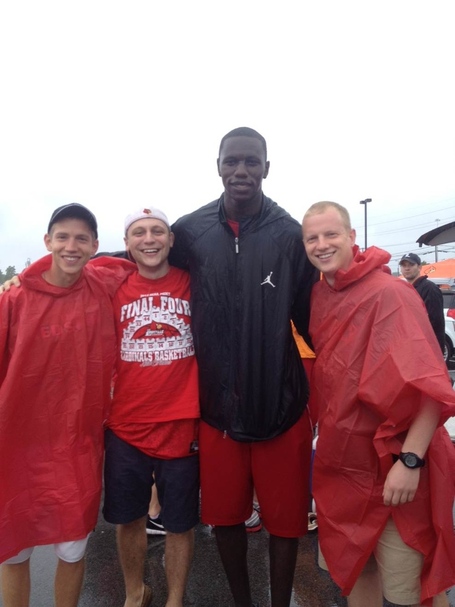 The email this came attached with a claim that Will has a framed picture of Baby Gorgui picture in his living room. I'm not sure if that was supposed to be a joke, but if it wasn't, way to be way out in front of the curb, Will. BG is about to become a national thing.

I linked to it earlier today, but C.L. Brown's practice report from Tuesday night is full of good stuff.

***Think Bridgewater was content with his 19 of 21 outing? Think again. After watching film of the game on Tuesday, he was self-critical of the one pass he threw away. (His other incompletion was a low throw to Andrell Smith that Smith did get his hands on, but couldn't scoop it in.)

"On the one play when I did throw the ball away I had Scott Radcliff wide open in an over route," Bridgewater said. "So just slowing things down and not going too fast."

***Much has been asked of who is the fastest on the team between Perry and receiver Charles Gaines. When I asked Bridgewater who he thought was faster, he joked "I am." He eventually gave the nod to Gaines who he quoted Watson in saying Gaines ran like a "deer" and a "cheetah."

Joe Tronzo is back with another edition of "Four Downs" over at Cardinal Sports.

CBS Sports names Charlie Strong as its Big East Coach of the Week.

Bridgewater certainly helped, going 19 of 21 for 232 yards in just over 2 1/2 quarters. Strong replaced Bridgewater with senior Will Stein late in the third quarter, a decision he explained after the game.

"A year ago at this time Stein was the starter and Stein deserves to play," Strong said. "We got ahead there (32-7) and I said I wanted Stein to go out there and direct the offense. Teddy was not injured, I just wanted Stein to play."

So after leading a super-efficient offense and opportunistic defense to a win in the opener, Strong has the Cardinals looking to reach the potential many had predicted. It's BCS or bust for Louisville in 2012, and the Cardinals looked the part in Week 1.

The men's soccer team fell last night 1-0 at Saint Louis. The Cards are back home Saturday night at 7 p.m. against Army.

Speaking of soccer, the 12th-ranked women's team will be looking to push Louisville's record against Kentucky to 3-0 this year when they face the Cats on Friday night at Cardinal Park. 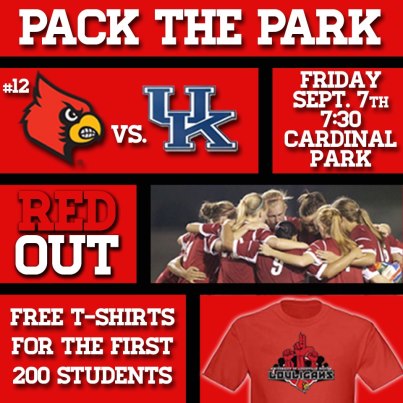 A reminder that $3 16oz Bud and Bud Light products are served during games this season. Write it off as an early tailgate.

Former "fat package" all-star Mario Benavides would like to score a college touchdown, he just has no idea what he would do if it happened.

But just once he'd like to be the reason for the celebration, although he hasn't quite decided whether he would spike the ball, dance or do something else.

"I honestly don't know what I'd do," Benavides said. "You, like, plan it out in your mind, but I think if it actually happened I wouldn't know what to do with it. It's like a dog chasing a car. I'd probably just freeze up."

Sunny Will isn't easily distracted, he just takes a great deal of pride in his ability to critique organized dancing.

It appears the leader of the free world was among those who caught the mighty Cardinals putting a whoopin' on their in-state rivals over the weekend.

If I were Carter Blackburn, this would only make the "and he drills it" call on a 41-yard missed field goal that much more embarrassing.

Every now and then I'll embellish something on here in a feeble attempt to put a smile one one or two of your faces, but the following tidbit is 100% true: last night I dreamed that Russ Smith was playing football, and that the back of his jersey simply had the last name "Diculous" on it. My first move, naturally, was to snap a close-up of the jersey with my cell phone. It was the only thing I could think to do, and Russ begrudgingly allowed it to happen.

But the weirdest part of all: he was wearing a blue and black uniform that looked suspiciously like the ones worn by LBA.

So what does it all mean? Well I've spent the last six hours connecting the dots, and I'm pretty sure it means that Louisville is going to win a national championship in football and basketball.

I took Intro to Psychology seven years ago. Don't press me on this.

I enjoy the young man's game.

Unlike everyone else in the country, the Sporting News has Louisville slotted second in its week one Big East power rankings.

Dad of the Year: 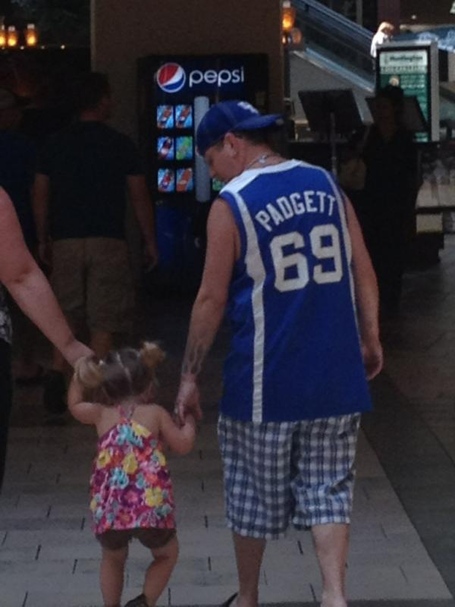 The Bradenton Herald has a nice feature piece on native son Damian Copeland, who finally got to show what he can do when healthy last Sunday.

On Sunday Copeland showed a national TV audience why he was such a coveted prospect. He caught four passes for 51 yards, including a spectacular diving catch on a third and nine from Louisville's own two yard line keeping alive a 99 yard drive that resulted in touchdown.

"I was just trying to get a completion to help our punter to get more space so he could change the field position," Louisville quarterback Teddy Bridgewater said. "Once the corner walked up to press Damian, we just took advantage of the defensive adjustment."

"The cornerback coming up to play me man tells me he thinks he is better than me," Copeland said. "When you work hard in practice the hard catches become easy. It set the tempo of the game and reminded me of the Southeast game."

Louisville baseball has opened its fall season and will be holding open scrimmages on Sept. 14 and Sept. 15.

And finally, an extremely in-depth preview of this Saturday's game against Missouri State.