An old rival is the Saturday foe as Louisville looks to finish the non-conference portion of its season a perfect 5-0. 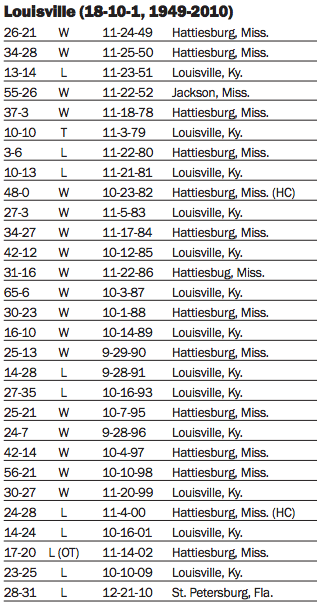 Definitely excited/nervous for the game, but my little sister just so happens to be getting married tonight. You'll have to understand if my mind isn't completely on football for just this one Saturday.

Didn't have time to try it on yesterday so keep me in your thoughts.

Bold Prediction: Louisville has a player rush for more than 150 yards.

And I'll pretend it's because of my call for him to use his speed more in open space. Also, you have no idea how badly I wanted to make the predicted star Pooda just so I could say Pooda again. 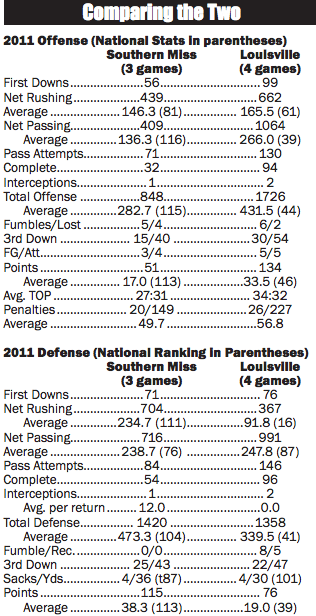 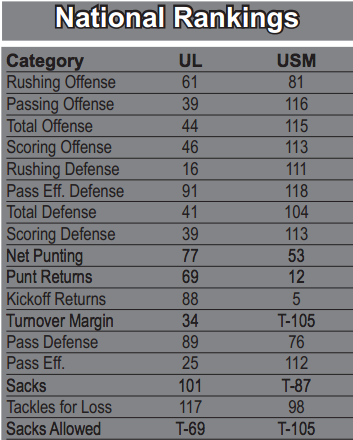 A Quick Look At Southern Miss (via gocardsguy)

Ellis Johnson went with the old "If I hire his head coach, maybe he'll sign with us" move when bringing on offensive coordinator Steve Buckley. Buckley coached highly touted quarterback Anthony Alford at the high school level. Alford was a top ten quarterback with offers from pretty much every SEC school including Alabama and Auburn. Buckley has told anyone that would listen that he told Alford to go elsewhere, but even with an opening at quarterback and his old coach running the offense, I doubt Alford chose USM just for the girls. Bringing a high school coach in to run your offense is a very risky decision and so far it has seemed to be the wrong one. The Golden Eagles offense is averaging 4.3 yards per play this season which is good for 119th out of 120 teams. Ricky Lloyd will get the start at Quarterback this weekend due to injuries, so we won't get to see the three quarterback rotation that Johnson has used so far this season. Even though Lloyd is a redshirt freshman with limited experience, playing free without having to look over your shoulder is a positive for the USM offense.

Louisville will have to wait another week to get a break from the spread offense. Buckley brought his spread option attack from Petal High School when he got the job. It's hard to really analyze the offense because it's been flat out bad so far. Five offensive touchdowns is probably not what they envisioned at the start of the season. Desmond Johnson has run the ball well so far, but with the team trailing so much he hasn't been able to get a rhythm. Bedford will bring a lot of pressure at Lloyd but USM does have the athletes outside to get some big plays. The question is whether or not the quarterbacks can get it to them. The offense is similar to FIU in that they will run some of the spread option that FIU had some success with last week. Lloyd isn't the running threat that the two injured quarterbacks are, but he's not a statue either.

Tommy West had one of the better press conference moments ever a few years ago and now heads an athletic Golden Eagles defense. West and Johnson are well respected defensive minds that should find success in the coming years. But for now they are taking their lumps. Nebraska quarterback Taylor Martinez threw an uncharacteristic 5 touchdown passes in the opener and USM couldn't force a turnover against a sloppy ECU team. Western Kentucky somehow managed to give USM it's first takeaway last week on a broken screen play turned interception. There are a lot of athletic players on the defense but they don't seem to be picking up the scheme well. Guys were out of position a lot against Nebraska and they have given up some easy touchdowns. Louisville will face a great player in Jamie Collins though. He finished last year with 19.5 tackles for loss and is leading the team in, literally, every defensive statistic other than that lucky interception.

The Golden Eagles have a ton of talent on both sides of the ball. They returned 13 starers between the offense and defense but for some reason they haven't had the success they had last year. The coaching staff has made some questionable decisions and has done a poor job at getting their big play guys the ball in space. The defense gave up 17 explosive plays (10+ yard runs 15+ yard passes) last week and are being pretty much just as bad on defense as they are on offense. Rotating three quarterbacks is a perplexing decision and so is sticking to only man coverage after giving up multiple touchdown passes. The natives are very restless and a bad loss at the hands of the Cardinals could really cause some problems down there.

--These two former Conference USA foes combined to win seven league championships while both were in the league from 1996 until the Cardinals left in 2005.

--Louisville is just 3-11 all-time against Southern Miss in Hattieburg, but has won the last two meetings there. Under the guidance of quarterback Dave Ragone, the Cards defeated USM 20-17 in double overtime in 2002 and trounced the Golden Eagles 49-28 in 2000.

--Southern Miss fans will be wearing black on Saturday night in accordance with a "Blackout" theme planned for the game.

--Louisville is 7-3 in the moth of September under head coach Charlie Strong.

--Southern Miss one of 12 programs which have appeared in 10 straight bowl games.

--The Golden Eagles have played 19 true or redshirt freshmen in their first three games this season.

--Louisville is off to a 4-0 start for the first time since 2006. In that season, the Cards won their first eight games and finished the year 12-1 with a victory in the Orange Bowl.

--Southern Miss is 29-21-1 all-time against current members of the Big East.

--Louisville is 88-78-1 all-time against current members of Conference USA.

--Louisville has scored first in all four of its games this season. Overall, the Cards have won the last eight times they've put points on the board before their opponents.

--Louisville is outscoring opponents 90-35 in the first half, but just 44-41 in the second. The Cards have been especially dominant in the first quarter, where they have outscored their four opponents by a combined 41-7.

--Southern Miss is allowing 234 rushing yards per game. Only ten FBS teams have been worse at defending the run.

--The Golden Eagles will run the same 4-2-5 defense that Louisville saw against North Carolina.

--Louisville has scored on 19 of its 20 trips (95%) to the redzone this season, good for the 14th-best mark in the country. Fifteen of those 19 scores have been touchdowns.

--With its top two quarterbacks injured in last week's loss to Western Kentucky, USM will turn to redshirt freshman Ricky Lloyd to get the job done behind center. Lloyd completed 4-of-5 passes for 72 yards and a touchdown against the Hilltoppers.

--Southern Miss has had a winning record in 18 consecutive seasons.

--Louisville has struggled to cover kicks all season and could be in for some serious trouble against USM return man Tracy Lampley. He has four career returns for touchdowns, including a 100-yard kickoff return against Nebraska this year.

--"We own the series, but we haven't beaten them since 1999. It's a great opportunity and a great challenge, and great rewards come from accomplishing things when you have great challenges. There is something here that our team can grab onto if we want to and take advantage of this opportunity. This is a big-time challenge. It's a big-time opportunity. It's what you come to college football and play for." --USM coach Ellis Johnson

--"The last six quarters, I don't think we've played our best football. "It's kind of where we hit that spell. We can get better, we want to see improvement." --Charlie Strong

--"It's a natural rival game, and we should be coming in angry and ready to get our first ‘W' against a team that we know if we play sound football that we can beat." --USM LB Dylan Reda

--"They're basically running the same thing they did when we played them in the bowl game. They have the same playmakers - No. 1 (Tracy Lampley) and No. 7 (Desmond Johnson) - so they'll do the same type of stuff, try to get you in space and make you miss. We just have to swarm the ball and hopefully we can contain that." --Preston Brown

--"I don't listen to all the critics - they're ranked and we ain't beat ‘em in 20 years. I'm just worried about Saturday. What happened 20 years ago doesn't matter Saturday." --USM OT Jason Weaver

--"Our biggest enemy is consistency. There are times where we're lights out; at other times we're just too inconsistent. That's one of the things that veteran sophomores and juniors have to learn. We have to be a consistent football team, and we're not there yet." --Shawn Watson

----"They try and hold onto the ball, possession-pass you, and this quarterback is really, really good. He's, by far, the best quarterback that we've faced up until now, and the best offense, to be honest." --USM defensive coordinator Tommy West

--"Keeping everything in perspective right now, obviously we've set high expectations for ourselves. We've played great defense the previous two years. Basically everyone coming back with the exception of two guys you would expect us to come out rolling. That hasn't been the case." --Clint Hurtt

--"Even talking to my dad, and he was like, ‘You know, that was the original rivalry in Conference USA, us and Louisville. So, I feel like it's going to be a rivalry game. That's the mentality that everyone's going to have." --USM LB Dylan Reda

--"Practice was slow last week. We weren't really flying around. No one really had a lot of energy. You can see we're coming out with a lot more energy and fire. Everybody is hitting more. We're basically tackling now, so we're having a lot more fun." --Preston Brown

--"They started talking trash about us being in Conference USA, [that] we can't dance... it was stupid. We'll do our talking on the field. A friendly dance competition and they take it all serious? It's ridiculous." --Unnamed USM player before 2010 Beef 'O' Brady's Bowl

--"They have a quarterback, who is just a sophomore, and is playing like a fifth-year senior. They've played some very good football teams. They are playing extremely well." --USM Ellis Johnson

--"We want to show the coaches that we can do it, that we're capable of it. We've shown flashes of it all the time - obviously the first half of the North Carolina game. We just haven't put a whole game together. The coaches keep preaching it, preaching it, but we haven't done it yet." --Brandon Dunn

--"I told our guys it's all about complacency now, don't let it settle in, don't listen to the noise in the system. Everyone is going to tell you how good you are, but all I have to do is turn on the game film and we'll see how good you are. I can take five clips out of this tape right now and show it to you and we can see where we are." --Charlie Strong

The Golden Eagles come out with a lot of fire early, but U of L is able to weather the storm and control the game. It's still not the complete performance we've been looking for from the Cards, but it's a step forward.