That's Sean Carroll and his wedding party continuing the summer/fall trend of marriages initiated through L-Raising. Those are a couple of his groomsmen continuing the summer/fall trend of d-bag groomsmen refusing to participate. And that's a bridesmaid starting the fall tradition of being completely and utterly clueless as to what is taking place. Congratulations, kids.

I'm not sure if any of you guys noticed it, but the site looks a little bit different than it used to. I can't imagine this will result in comments or questions, but if you have any I'll be happy to address them.

C.L. Brown goes into "The Pit" with pat Moorer and lives to tell about it.

I would have died. Not hyperbole.

Louisville splits the difference between its AP ranking and its USA Today ranking by checking in at No. 18 in the new BlogPoll. For what it's worth (a lot), I have the Cards at No. 16.

Very cool news out of U of L, where Charlie Strong has started a program that aim to help the youth in the city of Louisville.

Strong is now trying to take that a step further by developing the Cardinal Strong Program. As part of his continued efforts to reach out to the community and connect with young people to have a positive impact on them, Strong would like to share the "Cardinal Principles" his players adhere to, to encourage young people to use these principles as guidelines for their daily lives.

Briefly, these principles are below:

1. Commitment - Academic achievement, doing the right things, staying drug free, etc.
2. Attitude - Being positive, showing great work ethic, being the best in all they do.
3. Respect - Self, authority, parents, teachers, etc.
4. Discipline -Doing the right things by forming great habits and sticking to them.
5. Sacrifice - Giving back by helping fellow students and those in the community who need assistance, putting others needs before their own.

The program is open to kids ages 6-13 in the city of Louisville (high school students are not eligible to participate due to NCAA rules). An application must be filled out and signed by a parent/guardian and the pledge must be signed by the participant agreeing to adhere to the Cardinal Principles.

Doesn't sound like a move made by a man looking for a job in another city.

Louisville was among the schools who visited five-star power forward Noah Vonleh this week. Vonleh recently announced that he was reclassifying to the class of 2013.

ESPN's Mark Schlabach simply refuses to project that the Cards will spend the holidays playing in anything other than the Russell Athletic Bowl. His partner, Brad Edwards, still has Louisville taking on Florida State in the Orange Bowl.

Big fan of the update to @cardchronicle. Looks great.

Uh, if CHRIS MOTHERF---ING CURRENT is a fan, then I think we should probably all just go ahead and climb on board.

Teddy Bridgewater did not receive any votes in this week's ESPN Heisman Watch.

"What are you going to be for Halloween?" It's a question that has received literally millions of different responses over the years, but none better than this one.

CBS has bumped Alabama into its national title game projection, which means we get to face...

Pretty I sure I saw at least one squirrel in every single yard I drove by today. You can't tell me they're not up to something.

It's already in the river (the stream of stories below the top), but Louisville is once again No. 1 in the SB Nation Big East power poll.

A few evenings ago, DeVante Parker made a tweet about how it's hard to find women on campus who haven't "been with" other members of the team. It wasn't anything particularly offensive in terms of tweets from college athletes, but it made its rounds pretty quickly and my guess is word got back to the man at the head of Louisville football.

The disrespectful tweet I made about women was completely out of character for me and I apologize.

Even though I'd hate it if I were a college athlete, I will say that I'm glad the team's tweets are being monitored, and I'm glad the players are aware of it.

Four Louisville Cardinals rank in the top 50 of this list of the best 100 players in college basketball...which was written by someone who probably put a great deal of time into it...and who is probably very handsome.

U of L is offering up special ticket packages for the final four home games of the season. Here are the deets:

With the football team starting 4-0 for the first time since 2006, the University of Louisville Athletic Ticket Office will offer the remaining four home football games in a special ticket package for $40.

Fans can purchase tickets to the four BIG EAST home games in the UPS Flight Deck, sections 2-5, at a discounted rate. The Cardinals play host to USF on Saturday, Oct. 20; Cincinnati on Friday, Oct. 26; Temple on Saturday, Nov. 3; and Connecticut on Nov. 24.

The remaining tickets are from the allotment returned by Louisville's remaining opponents. Tickets may be purchased by calling the UofL ticket office (502) 852-5151 or (502) 852-7254 or by visiting either of the two U of L ticket offices: Gate 2 of Papa John's Cardinal Stadium adjacent to Floyd Street or on the third floor of the Swain Student Activities Center.

I just checked out the U of L men's soccer newsletter and noticed that their next home game is against on DePaul on Oct. 3, and that the theme - as if they needed an additional one - is Oktoberfest. Fans who head out to Cardinal Park can apparently get a beer and pretzel for five bucks. I will be attending my first game of the year.

Also, the team's next game - at Rutgers this Sunday - will be carried live on CBS College Sports at 1 p.m.

CBS likes the Cards big over Southern Miss on Saturday.

Magic number for Louisville: 38.3. Southern Miss gives up, on average, 38.3 points per game. The Louisville offense is potent, but it hasn't put together a full game of offensive dominance. Saturday would be a great chance to get rolling headed into conference play.

Magic number for Southern Miss: 120. The Golden Eagles are ranked 120th -- of 124 -- in the nation in passing offense. Look for the Cards to stack the box and force Southern Miss quarterback Chris Campbell to beat them with his arm.

The game comes down to: Focus. Louisville has shown signs of dominance, but also some signs of complacency. It won't matter this week, but the Cards need to maintain focus if they expect to win the Big East.

We mentioned earlier that Brian Brohm, Cam Graham and Montavious Stanley will be former Cardinals playing in the UFL season-opener tonight at 9 p.m. on CBS Sports Network, but we neglected to mention that George Bussey will also be starting at guard for the Virginia Destroyers. Good luck to all the former Cards on the start of their seasons.

Sports Illustrated has a really good feature piece on Nate Nord, which will make the guys who sit behind me at home games extremely excited.

The creepiest UK fan of all-time is back.

Despite the fact that facing all spread offenses hasn't allowed the Cardinals to get much defensive penetration, Charlie Strong still says he's looking for more sacks.

Congrats to the U of L men's golf team, which fought through rainy conditions to bring home the Cardinal Intercollegiate title for the first time since 2008.

The Daily Orange says Senorise Perry is the breakout star of this Cardinal team.

Running back wasn't even Perry's predominant position at Chattooga High School in Summerville, Ga. Still, he racked up 1,134 offensive yards and 12 touchdowns as a runner and receiver during his senior year. But he earned All-Area honors at linebacker, where he was ranked 139th nationally by Scout.com.

Now after two seasons on special teams at Louisville, Perry has another chance to prove his offensive prowess. He has avoided a letdown after the breakout performance against Kentucky, adding rushing totals of 72, 86 and 74 yards the last three weeks.

Perry has also added eight catches for 96 yards to complement his rushing totals.

It's looking as though the Big East might be in better position with the new BCS than once thought.

The debate over whether Louisville or Rutgers is the best team in the Big East is the hottest topic in the league right now.

Are end of the world flash movie jokes still cool? Because I've been saying "hokay" at least once a weekend for a loong time now.

The fact that it's Southern Miss week gives me an excuse to post perhaps my favorite photoshop in the history of this site. 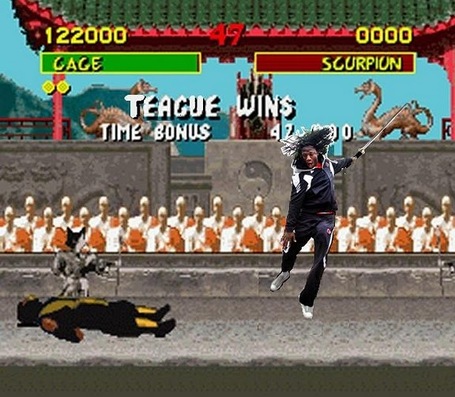 Good piece from the New York Times on what may be the only thing I really, really don't like about Louisville: the traffic. There's just no excuse for it to be that consistently bad in a city this size.