With four commitments already, Rick Pitino's recruiting class of 2013 currently sits as the third-best in the nation.

Share All sharing options for: Louisville's Basketball Recruiting Class Of 2013 Ranked No. 3

Louisville trails only Florida and Memphis in the new rankings. 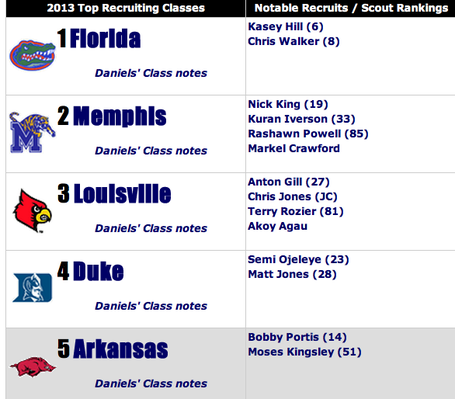 Obviously much of the reason Louisville is currently ranked so high is because most of the five-star players in the class are still uncommitted. That said, I still think this will wind up being a top 10 or top 15 class for Rick Pitino.

Anton Gill steadily rose up the recruiting rankings last year and I don't think he'll give folks any reason to drop him down during this season. Akoy Agau has been hurt by the fact that he plays in Nebraska and not a lot of people have been able to see him play. I think that will change now that he has "committed - Louisville" next to his name. The thing that will ultimately hurt U of L when the final rankings come out is the fact that Jones is a JuCo transfer, because if he were an actual member of the class then I think he'd warrant five-star status.

As always, we should never get too caught up in things like recruiting rankings. This is a good class as it stands, and I think there's a chance that it could get even better.