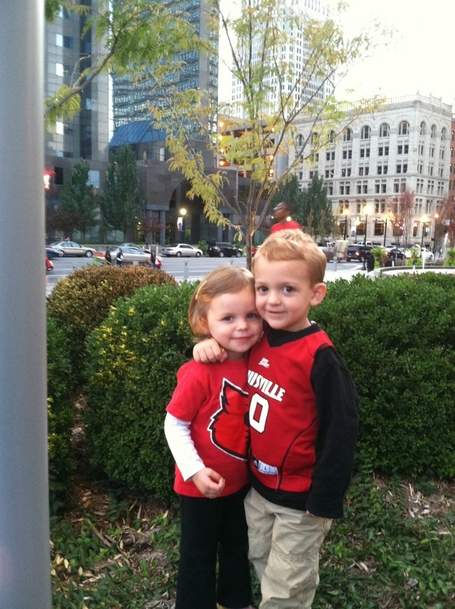 Kinsley Yerkes and Logan "Gorgui" Shulhafer are thoroughly enjoying the football team's 4-0 start, but are also looking forward to that glorious period when the basketball Cards join them in fall competition. Logan is obviously a Gorgaholic, while Kinsely is a Russ fan who apparently sings "Everyday I'm Russelin" on a consistent basis. This also probably means that she's my daughter.

Seriously though, I've been forced into taking pictures for 28 years now and I'm not sure I've ever pulled it off as well as Logan does here. Left hand in the pocket? Right arm around the girl? Sly half smile? Tried it all, individually and in tandem. Did not work. At all.

You're going to be some competition for me in about 13 years, Shulafer.

ESPN's Mark Schlabach takes a look at third year coaches in college football and says what we're all sort of fearing about Charlie Strong.

The past: Strong, a former defensive coordinator at South Carolina and Florida, waited nearly a quarter-century for his chance to become a head coach. His early results suggest he should have been hired much sooner. After inheriting a program that won only 15 games during the three seasons before he was hired, Strong guided the Cardinals to consecutive 7-6 seasons and a share of a Big East title in 2011.

The present: The Cardinals are ranked No. 19 nationally after starting 4-0 for the first time since their Orange Bowl season in 2006. After impressive victories over rival Kentucky and FCS foe Missouri State to start the season, Louisville nearly blew a big lead in a 39-34 win over North Carolina and struggled to put away Florida International 28-21 on the road on Saturday.

The future: If Louisville wins the Big East and gets to a BCS bowl game -- and some are already suggesting it might finish the regular season unbeaten -- Strong will be among the hottest coaching candidates in the country. Strong, a native of Batesville, Ark., already has been mentioned as a possible candidate for Arkansas' vacancy.

Teddy got some Heisman love during Fox's college football coverage on Saturday. 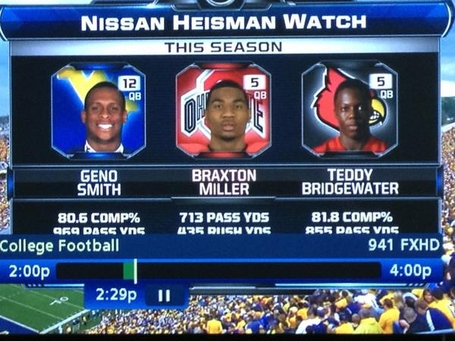 Adam Zagoria's preseason Top 25 for Sheridan Hoops has Louisville at No. 1, followed by Indiana and Kentucky.

This week's updated depth chart includes some changes on the defensive line.

One way to make a video with the Card Chronicle bird head:

A better way to make a video with the Card Chronicle bird head:

Rick Bozich wonders whether Louisville is underrated or overrated at this point in the season. Accurately rated is not an option.

Our man Adam Lucas has a new website to share his graphic design splendificence. Check him out over at Covered in Red.

I'd pay just about every penny I own for a 30 for 30 on Titus Teague's 2010 Beef Bowl dance-off victory over Southern Miss. In the mean time, I guess I'm going to have come up with my own retrospective this week.

1. Louisville (4-0, 0-0 Big East): The Cardinals barely hang on to the top spot after sneaking past Florida International Saturday in Miami. Let's chalk their uninspired and largely poor play up to the literal swamp-like conditions, and -- with several Cards hailing from south Florida -- perhaps a lack of focus. Most alarming, though, was quarterback Teddy Bridgewater, who has been near-perfect in the early season. The sophomore threw his first two interceptions of the season Saturday, and if not for a brainless roughing the punter penalty against FIU, he and the offense would have given the ball back to the Panthers with just under four minutes remaining and up just a touchdown. Last week's power ranking: 1. Next up: at Southern Mississippi, Saturday, 8 p.m. ET (CBS Sports Network).

The 10th-ranked Louisville volleyball team suffered a disappointing loss to Notre Dame in a match they had appeared to be in complete control of on Sunday.

On the other end of the spectrum, big ups to the men's soccer team for opening Big East play with a stunning 2-1 win over No. 4 Notre Dame on Saturday. Andrew "Peppa" Farrell netted the game-winner on a PK in the 73rd minute. The Irish had been 7-0-0 before the defeat.

Seriously. DePaul. It's getting f---ing creepy.

Bozich and Crawford debate whether or not it's important that Louisville beat Southern Miss. by more than Western Kentucky did.

Former Card Bilal Powell was named one of the game captains for the New York Jets on Sunday and went on to lead the team in rushing as they knocked off the Dolphins. As the game went on it was Powell, and not starter Shonn Greene, who was turned to in key situations.

Expect our man to be named the new starter in New York sooner rather than later.

Say what you will about Kentucky's performance against Florida on Saturday, but those guys made history. 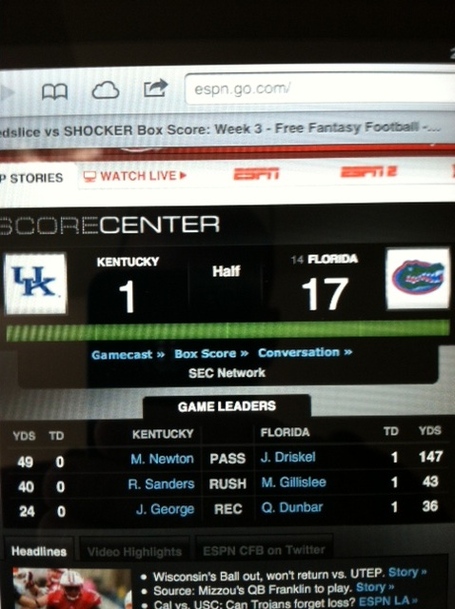 And finally, Mark Ennis and I are back on the radio from 6-8 talking about sporting what-have-yous. Listen live on ESPN 680 or anytime on ESPNLouisville.com.