Share All sharing options for: Louisville Grinds Out 28-21 Win Over Florida International

It was far from the dominating performance Cardinal fans hoped they'd see, but Louisville answered the bell when it had to and pulled out a 28-21 win over FIU in its first road test of the season.

The good? Senorise Perry looked fantastic on a handful of runs, Andrell Smith gave his best performance as a Cardinal, and the team made big plays when it absolutely had to.

The bad? Teddy Bridgewater did not look especially sharp and threw his first two interceptions of the season, the defense gave up several sustained drives to an opposition that on paper appeared inferior, and the team as a whole had far less enthusiasm and bounce than U of L fans have come to expect under Charlie Strong. 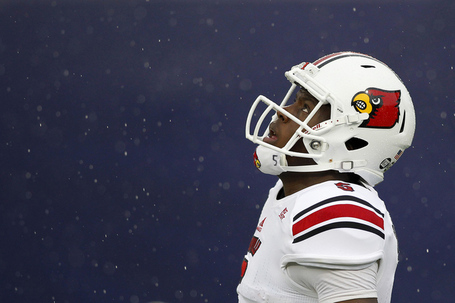 It wasn't what we wanted, but it also wasn't the devastating loss this same team dealt us a year ago, and that was a possibility that seemed very real with the Cards down 14-7 late in the second quarter.