Television: ESPN3.com...so none, I guess.

Would be higher if I wasn't so worried about being able to get a clear picture. Still, this is the first Louisville sporting event I've watched at CC Headquarters since the Elite 8 win and I'm pretty excited about it. Even though going six weeks without a tailgate will probably kill me eventually, right now I'm looking forward to an away game experience.

Also, revenge, and all that.

A year ago I made my polo debut at the FIU game. I left drunk, upset and arguing with someone I'd never met before about Will Stein and that person's facial complexion.

The same mistake will not be made in 2012. Never F with a winning streak.

Pre-Game Meal: Grilling burgers and then eating whatever friends bring. CC Headquarters is back, y'all.

Titus Teague Playing Alert Level: Orchid (I wouldn't bet my first born on it, but I think he sees the field at corner tonight).

Despite its lackluster start overall, the FIU offense has been pretty effective through three games. That stops this evening and Adrian Bushell is the biggest reason why.

Going all in with Bushell.

Spoiler alert: FIU runs a spread offense. The good thing for Vance Bedford and his defensive unit is that they don't run a hurry-up like we've seen so much of this year. FIU spreads the field and operates pretty exclusively out of the shotgun, but they have a very balanced attack. Running backs Kedrick Rhodes and Darian Mallary split carries like Jeremy Wright and Senorise Perry, with Rhodes as the starter. Rhodes is easily the feature player of this offense and the coaching staff does a good job at getting the ball in his hands. He had a monster game against an improved Duke team in which he took the second play of the season for a 64-yard catch and run. He finished the game with 245 yards on 32 touches. Mallary and Rhodes are used in two back sets a lot and they run the spread option out of that formation. It's a new wrinkle to the offense because they have a quarterback that runs the play well and can also break free if not accounted for. Jake Medlock has done well in his first season as a full time starter and he has also had a big game this year. He put up 144 rushing yards against Akron two weeks ago. This spread is much different than what we have seen so far this year. Let's hope that our guys are ready for it.

FIU has three new starters on it's offensive line, only returning it's tackles. They have done a good job in the running game but haven't been outstanding against the pass. There have been a handful of miscommunications which is fairly normal when you have a new center. They've allowed 8 sacks this year and they haven't done too great when it comes to holding their blocks on the longer developing misdirection plays that come with the spread, like reverses and outside counter runs. Coach Strong has already said that Louisville will play it's nickel/3-3-5 package again this week so I expect to see man coverage with Hakeem Smith playing close to the line. I think the defense will try to stop the run like they have all year and take their chances with a passing game that doesn't have many big play threats.

FIU returns 10 starters from last years defense that sufficated Louisville's running game last year. They don't have the NFL talent that UNC did, but as we saw in the first half Saturday, that doesn't mean much. However, FIU ranks 82nd in total defense and honestly might be a worse tackling team than UNC. Big plays have been easy to come by this season and it really seems like the defense doesn't adapt well. Duke repeatedly threw deep posts and go routes against Sam Miller and he got beat again and again with no safety help. You think Teddy and Shawn Watson aren't dreaming of Charles Gaines running freely down the field? The run defense is still decent, though they haven't faced a "running" team so far this season. And to be frank, why run the ball when you can get the ball down the field so easily in the passing game.

FIU used a defensive touchdown and big plays on offense to win last season but I don't see either happening this year. They run a multiple defense that shifts a lot before the play. Shawn Watson hasn't let a defense dictate his playcalling yet this season and I don't see that changing Saturday. FIU leaves it's corners on an island a lot and brings it's safeties up to stuff the run. When you leave your corners out there like that it leaves you vulnerable to talented receivers. I expect Teddy to have a good game whether or not the running game is going. But if our running game can move the chains, look for the safeties to be pulled up and Gaines and company to get deep a few times. 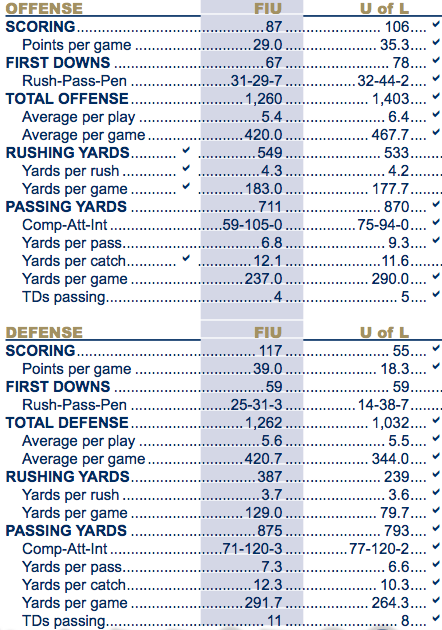 --Louisville's loss to Florida International last season was the first ever by a Big East team to a Sun Belt team.

--FIU will likely be without starting tailback Kedrick Rhodes, who did not practice this week because of an ankle injury. Starting in Rhodes' place will likely e senior Darian Mallary. Mallary, the brother of Louisville cornerback Andrew Johnson, has five rushing touchdowns in three games so far this season.

--A combined 12 players on these two teams played their high school ball at Miami Northwestern.

--FIU has 42 players on its 2012 roster that have been a game starter during their careers. Those 42 players have combined for a total of 530 starts, an average of 12.62 starts per player.

--Jake Medlock has thrown for 711 yards over the ﬁrst three games to start the season, the most by a quarterback at FIU.

--Louisville owns a 34-25 all-time record against Sun Belt opponents. Last year's loss to FIU is the only one of those defeats that has come after 1981.

--Louisville has played a Sun Belt school in each of the past seven seasons and has gone 6-1 over that stretch.

--Louisville is 8-5 on the road under Charlie Strong.

--An FIU coach touched Will Stein in a manner I'm not Ok with last season.

--FIU, which has been to back-to-back bowl games, was picked as the preseason favorite in the Sun Belt Conference. The Panthers will join Conference USA in 2013.

--"What is going to be critical at this time is we maintain our focus, we maintain our emotion and we are going to have to play with confidence and compete. Every second has to count. Last season, you look at FIU, and they came in here beat us." --Charlie Strong

--"You treat every opponent the same. But there is no denying [Louisville is] a great football team that is playing real good football and that is nationally-ranked. There's plenty of buzz around the game and there are plenty of players from South Florida so all that stuff adds to it. We always keep the focus on one game at a time. You are looking at the type of football team you want to play against to see where you are as a football program." --FIU coach Mario Cristobal

--"I remember seeing a team that came here and sucked the breath out of us. They defeated us on our home turf, and it's something that we want revenge on, but they are a team that plays with a lot of energy." --Teddy Bridgewater

--"It was early in the season and we just thought FIU was a bad football team to be honest with you." --Calvin Pryor

--"Bridgewater is the best quarterback we've seen on tape in a long, long time. That's saying something because we've seen some highly ranked ones." --FIU coach Mario Cristobal

--"I'm going to give them time to visit with their families. When it's over, let's lock those families out and I tell the families, ‘They're here to play a football game, this isn't a pleasure ride for them.'" --Charlie Strong

--"We'll hug. I'm so sensitive, I'll probably cry. I hope I won't, but I probably will." --FIU running back Darian Mallary on playing against his brother, Andrew Johnson

--"I think a lot of them are excited to see their family members. But at the same time it's business, they know the most important reason they're going down there is to play a football game." --Nate Nord

--"(Bridgewater's) a strong individual with what he went through with his mother [Rose Murphy]. That was a hard challenge for him. His mother had breast cancer. At one point, he wanted to stop playing football and take care of her. I would say he's a strong individual. He's very humble, down to earth guy. He's a real competitor." --FIU backup quarterback E.J. Hilliard

--"We're going down to play football it's not a vacation or nothing like that. When this is your profession, this is your job you have to make some sacrifices so if I have to not see my family I'm willing to not see them."--Teddy Bridgewater

--"It's a helluva challenge for us, but there will be no flinching from our standpoint. Nobody is going to back down from anybody. We're a 1-2 football team, and we're trying hard to get better." --FIU defensive coordinator Todd Orlando