A Look At Louisville's Statistical Rankings Through Three Games

Share All sharing options for: A Look At Louisville's Statistical Rankings Through Three Games

First, as a team: 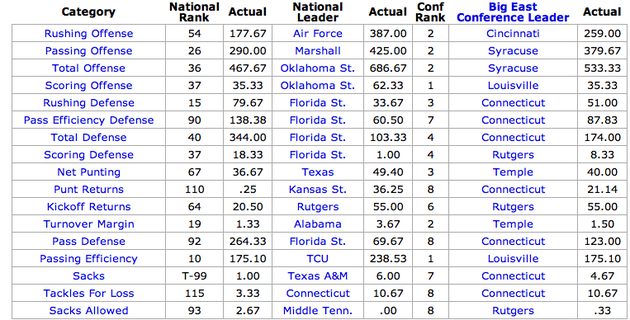 Nothing too surprising here, or at least nothing that can't be explained...here.

Louisville has been very efficient throwing the ball and better than average in just about every other offensive statistical category. That much we already knew. It's on defense where things look a bit bizarre on paper.

The punt return game continues to be lackluster. If he proves in practice that he can catch the ball consistently without issue, I'd love to see Charles Gaines get a shot out there just to bring some excitement to the unit.

Hey check it out, Teddy Bridgewater's good at football.

Aside from that, again, it's next to impossible for U of L's defensive players to rank high in any category outside of tackels or interceptions given the offenses they've gone up against.