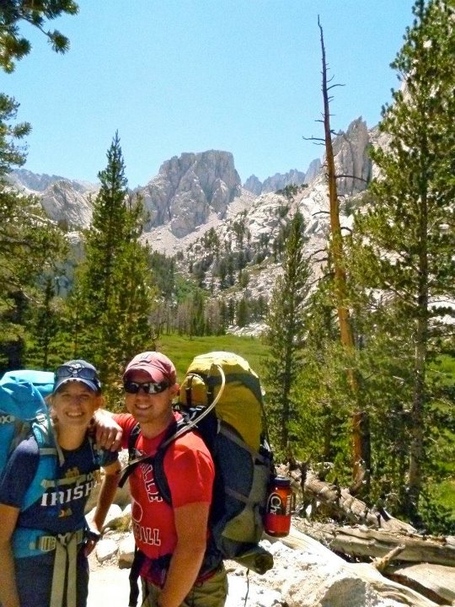 That's Andrew Jones representing the Cards in front of Mount Whitney. I can only assume his significant other left him shortly after this picture was taken but said she still wanted to go hiking together on one weekend five months out of every year.

Steve Jones of the C-J with some words from new U of L commit Akoy Agau.

"When I went there I felt really comfortable and had a gut feeling it was the right school for me, and my heart was telling me ... so I made that decision," he said in a phone interview. "I didn't think I would commit tonight, but it just came to me, and I thought it was a good time to get it over with.

Agau gave coach Rick Pitino, who turned 60 on Tuesday, the news during a large gathering of his family, friends and coaches at Agau's girlfriend's house, drawing applause and hugs all around.

"I told him, ‘Coach, I know it was your birthday yesterday, and I have a late present for you,'" Agau said. " ‘ Next year I'll be attending the University of Louisville.' And he was like, ‘Wow, it's a great year to be 60.'"

With the commitment of Agau, Louisville has moved to No. 2 (behind only Florida) in Scout.com's team rankings for the class of 2013.

The World-Herald in Omaha also has a good write-up on Agau's commitment.

If FIU running back Kedrick Rhodes misses Saturday's game because of an ankle injury, his likely replacement in the starting lineup will be senior Darian Mallary. This is significant because Mallary is the brother of starting Cardinal corner Andrew Johnson.

Mallary said his brother has observed text messaging silence this week, obviously going into game mode. After the game, however, Mallary said, "We'll hug. I'm so sensitive, I'll probably cry. I hope I won't, but I probably will."

Aww, well now I want him run for 150 against everyone but us.

According to The President, his family will be wearing shirts with this image on them to the game: 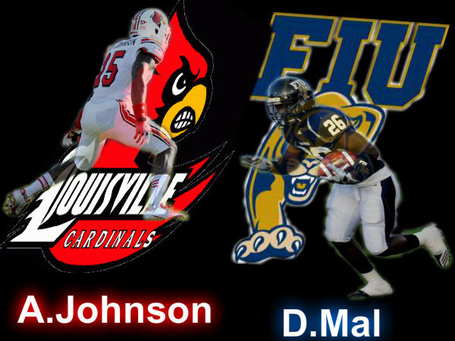 Mallary has carried 35 times for 164 yards and five touchdowns - including at least one in all three games - so far this season. He's also caught seven passes for 77 yards. Mallary did not play in last year's 24-17 win over Louisville.

The Miami Herald says no one expected Teddy Bridgewater's first college start in the city of Miami would come as a Louisville Cardinal.

You could have won a lot of money two years ago if you bet that the first college game he would start in Miami would be at FIU Stadium rather than Sun Life Stadium, where the crosstown Hurricanes play.

Otherwise, sophomore quarterback Teddy Bridgewater has been everything recruiters thought he would be coming out of Northwestern High. He has just been doing it as a Cardinal instead of a Hurricane.

C.L. Brown has a really good story on the well-documented success Charlie Strong's Louisville staff has had recruiting in the Miami area.

The Cardinals always have recruited in Florida, but third-year coach Charlie Strong has had unparalleled success in talent-rich Miami-Dade County. Consider this: U of L signed five of the top 15 recruits in The Miami Herald's top 25 rankings for 2011 - more than Miami, Florida State and Florida combined.

"I don't think I'd ever seen a recruiter from Louisville before he (Strong) came down," said Homestead coach Patrick Burrows, who coached U of L defensive backs Andrew Johnson and Gerod Holliman while at Southridge. "I can't recall. I don't even know who was coaching at Louisville before Coach Strong."

The cover of the new Slam asks the question each and every one of us is currently wondering. 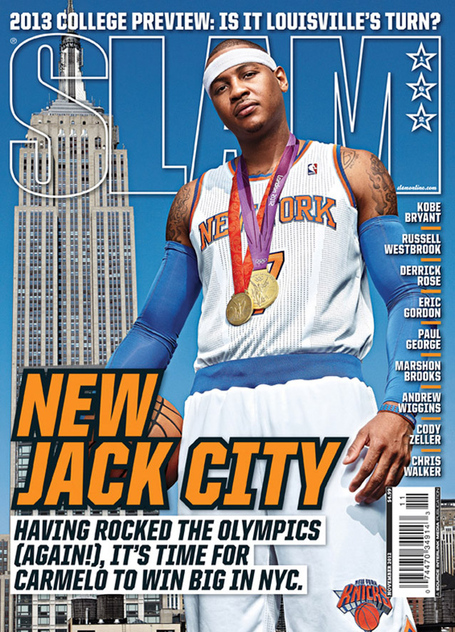 The Big East is still exploring the possibility of adding a 14th member for football and splitting the conference into "Red" and "Blue" divisions. If that happened, Brett McMurphy says he would expect Boise State, Central Florida, Cincinnati, Houston, Rutgers, Temple, and the to be decided 14th team to make up the Blue Division. Connecticut, Louisville, Memphis, Navy, San Diego State, South Florida, and SMU would comprise the Red Division.

If I were commissioner, I would have gone with "DePaul" and "Seton Hall" for the division names. They don't even have football teams, so why not let 'em have a little fun. Just like we do in basketball.

It's official, after the 2014 season the Orange Bowl will feature the ACC champion against the highest-ranked team among Notre Dame and available teams from the SEC and Big Ten.

Unlike the current BCS, there will be no limit on the number of teams from a conference to fill the 12 available slots. As many as 10 of those spots could be spoken for in any given year. Those 12 schools will be selected by a human committee.

With the Orange move, the Big East is not currently assured an automatic spot in the playoff bowls. It will be up to those access bowls to select a team or teams from the Big East, MAC, Conference USA, Sun Belt and Conference USA in years when those bowls are not national semifinals. Bowls. In certain years, the SEC and Big Ten will have access to four of the six bowls.

So under this new format, here's what the "BCS" would have looked like last year:

Which means Big East champion West Virginia, the team that beat Clemson 70-33 an could have beaten them 105-21, would have been playing in the God Only Knows Bowl.

Hakeem Smith is a dreamer.

In here watching titanic hoping they don't hit the iceberg, knowingly they will

But seriously, what happened to Fabrizio? I know I've brought this up before, but it really, really bothers me. So much so that I've already got the wheels turning on Titanic 2: No, Fabrizio, We'll A Never Forget A YOU!

Trinity's 8:30 game against Indianapolis Cathedral inside Lucas Oil Stadium Friday night will be televised on ESPN2. That means you'll be able to catch a local high school on national television this weekend, but if you're looking to watch the local college program of note - the one with the undefeated record and top 20 national ranking - you're going to be relegated to the computer.

A handful of folks have told me that the Sun Belt had the option of putting this game on ESPNU, but they chose not to in large part because they had originally wanted it to be played on Friday. Now I understand wanting to showcase your programs whenever you get the chance, but the league also has to realize that the only reason U of L signed this deal with FIU was for recruiting purposes. Playing in Miami does them no good if they're playing at the same time as all the high school players they're hoping to attract. 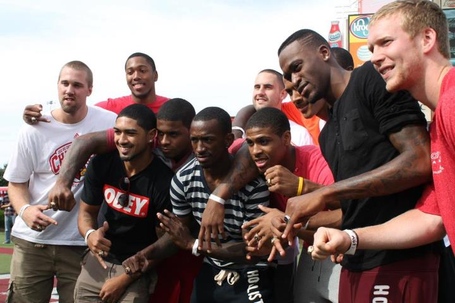 The basketball program wasn't the only one at U of L to land a major commitment on Wednesday. Dan McDonnell received a verbal commitment from Evoshield (MA) infielder/outfielder Matt Rowland.

The big play killed Louisville in its loss to FIU a year ago, so it should come as no surprise that prevention of such occurrences has been a focal point this week at Cardinal practices.

"They still have some good players," said Bedford of FIU. "(Wayne) Times is the T.Y. Hilton for them this year. He is playing really well. I'm concerned about him and tackling him in space. He is a very shifty guy if he catches the ball."

The Cardinals must be on their game this weekend to avenge last season's loss to FIU, and Hakeem Smith is very aware of their talents.

"They have a quarterback who is going to try and make plays with the ball," said Smith. "He is a big key. They have a receiver that we have also have to key, and the quarterback likes to get the ball to him."

And finally, just realized that NBC picked up on the Chronicle bird head movement. This is going to be the best(?) Halloween ever.